Plaque to Leonard at the Athy Community Arts Centre

Plaque to Leonard at the Athy Community Arts Centre

From Hotpress
BY: LUCY O'TOOLE
President Higgins will unveil the plaque to the Canadian singer-songwriter at the Athy Arts Community Centre on Thursday, May 3 ,2019

Leonard Cohen is the latest music legend to be honoured with a 'Made of Athy' plaque. Michael D Higgins is set to unveil the plaque at Athy Arts Community Centre in Woodstock Street on Thursday, May 3.

As we reported back in November, Johnny Marr of The Smiths and Mani from The Stone Roses have already been honoured by the 'Made of Athy' project. Set to run for 6 months and involve 23 plaques, the project celebrates high achievers in the music industry with links to the town. 'Made of Athy' kicked off with a plaque for Johnny Cash, unveiled by his grandson Thomas Gabriel on the 55th anniversary of Cash's concert in the town. Producer and broadcaster Bill Hughes, musician Jack L, Finnish singer Erin Koivisto and the late traditional Irish musician Liam O'Flynn have also been honoured with plaques.

Leonard Cohen's link to Athy is his collaboration with Kildare writer John MacKenna. The pair worked together on the script for the requiem Between Your Love And Mine. The work was inspired by Cohen's lines: “Behold the gates of mercy, in arbitrary space, and none of us deserving the cruelty or the grace, o solitude of longing where love has been confined, come healing of the body, come healing of the mind.”

Just two weeks before his death in 2016, Cohen approved the final draft of Between Your Love And Mine. Michael D Higgins was among the first to view the work at its premiere at the George Bernard Shaw Theatre in Carlow. 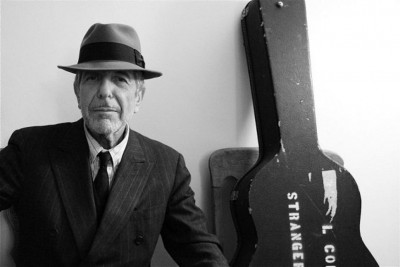 Re: Plaque to Leonard at the Athy Community Arts Centre

My sister just emailed this photo to me. 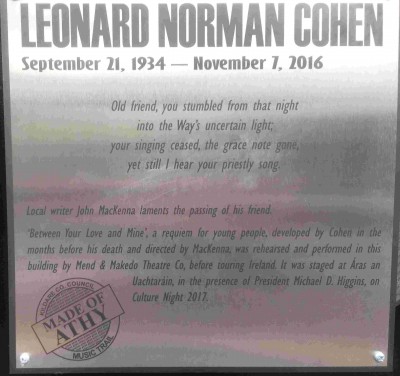