The 2 DVD files are now available for download here: 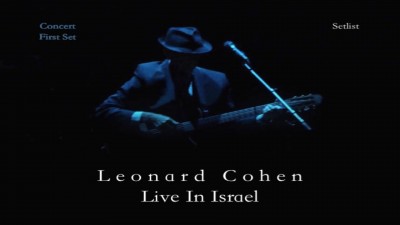 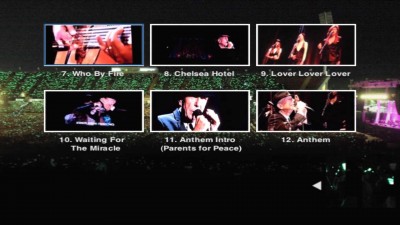 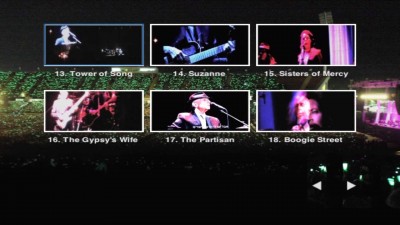 There are many free programs for Windows users that will burn DVD's, such as - https://cdburnerxp.se/en/home. You may have to change the file's extension name to "ISO" to get this to work.

Please note that while the DVD is in 3:4 aspect ratio it is advisable to watch in 16:9 - this can usually be done through the TV or DVD Player picture settings.

To watch on your computer you will need a program that will play img files, such as VLC, available for Windows and OSX - http://www.videolan.org/vlc/index.html (here too you can change aspect ratio to 16:9 - select Video, Aspect Ratio, 16:9 in the top toolbar).

The full version of the concert is also available on YouTube - https://youtu.be/cWuaWBi0or4

These are the notes I made In my original post here from the end of 2009 (with minor edits):

Leonard's concert in Israel felt to me to be very special and, I dare suggest, seemed also to resonate deeply with Leonard.

I have been fortunate to attend two other concerts - Prague and Olympia (2008) - and while always struck with the effort and attention of Leonard and the Band, I feel he delivered in spades on his promise in Tel Aviv "We'll give you everything we've got tonight".

So it is with this feeling that I watched the wonderful videos from Tel Aviv so generously shared (to the recorders and up-loaders of which I am grateful) and when I realized that videos of almost the entire concert were available - I was compelled to collect and edit the most complete rendition of the concert that I could manage.

I did not think that this endeavor would take the better part of my nights for two months straight - although I admit that frustration only very rarely appeared.

So this is my imperfect offering, which I hope you will enjoy.

Technical and Other Notes:

Each DVD is available as a disk image file (IMG), ready to be burned on a single DVD.

In compiling and editing the DVD I was guided by, and my "artistic" choices were made, in keeping with these objectives and principles (in order of importance) - originality, completeness, sound quality, video quality, consistency.

With this in mind, I would note the following:

• There were no complete enough videos from Tel Aviv of "In My Secret Life" and "Closing Time" and these songs have been substituted by videos from the concert in Barcelona only three days before, on Leonard's 75th birthday.

• Sound (only) of "Waiting for the Miracle" is taken from another concert, because of very audible talking all the way through in both the original videos that were available. Other than a slight sync problem at the beginning of the song, Leonard seems amazingly consistent in his delivery and for that reason the transplanted sound is hardly noticeable as such.

• Sound for the second half of "Boogie St." is also taken from a different concert, because of unavailability of the original. Some of the video images in this second half, although of Sharon's Tel Aviv "Boogie", do not actually match the audio, for the same (un)availability reason.

• My apologies for the sound quality at the very end of Leonard's band introduction in "Take This Waltz", this was the only footage available. Unlike "Miracle", here Leonard is less consistent in the timing of his introduction of each Band Member (probably also because of differing audience reactions) - so the attempt to replace this with better audio from another concert was abandoned.

• I could have done without most of the talking / commentary / individual sing-along by the audience, security personnel and food vendors (the cries offering beer from time to time were especially annoying) and which I avoided where possible. But I love the woman muttering "Oh my God" during Leonard's intro to "Anthem" (when Leonard says "So, ring the bells…").

• This may only be of interest to me, but you may as well know that the font used for the names of the songs in the menus is "Helvetica", which I believe is the font used in printing the original concert setlists.