This link is to Melbourne’s Hellenic Museum website that features the show ‘Hydra: Songs and Tales of Bohemia’, which I saw an earlier iteration of 18 months ago here in Melbourne: http://www.hellenic.org.au/events-2015#Hydra

I expect these two very talented local Greek musicians will have developed their show to be even more enjoyable than it was when I saw it last year. Here’s the earlier thread concerning the concert series by these guys then: viewtopic.php?f=8&t=34196&hilit=Spiros+Falieros

Anyway, if there are any Melbourne/Victorian based Cohenites who are able to, I would urge you to go along. There are three shows to choose from. However, along with a group of my friends, I’ll be attending the Saturday 14th November show. If you care to join us that night, please send me a PM and we can arrange to link up on the night.

Looking forward to it. Might help with my Cohen-withdrawal symptoms

This Cohen/Hydra tribute event I attended last night (along with Cohenite friends) was simply brilliant, even better than the one I enjoyed last year by these two very talented Greek performers, Chris Fatouros and Spiros Falieros.

The show, as developed for this event, is the resultant of the collaboration between The Hellenic Museum and these two performers, under the umbrella of Melbourne Music Week. A driving force behind the show and the person who had a major input into it, is Chris’s father Harry Fatouros, whom I had the privilege to meet and chat with.

The show itself is basically Leonard’s songs performed beautifully by the two boys, Chris masterfully on his guitar doing most of the vocals with his superb clear voice, along with Spiros on his keyboard producing a wonderful array of gorgeous complementary sounds. These songs were interspersed with audio-visual projections on twin screens, featuring commentary on Hydra, as well as pithy and humorous excerpts from documentary footage of Leonard (with just a background image of Leonard performing towards the end). The show was a well integrated whole and the choice of songs was most appropriate, in order as follows: Famous Blue Raincoat; Dance Me to the End of Love; The Future; So Long Marianne; Bird on a Wire; In My Secret Life; Who By Fire; Everybody Knows; Suzanne; Gypsy Wife; Chelsea Hotel; First We Take Manhattan; Hallelujah; closing with the rousing and well known Greek song, ‘Misirlou’.

To sum up, this is the sort of show that is of so high a standard and of such supreme entertainment value, that it deserves to have a far broader audience exposure, definitely in the Cohenite world at least, something I would like to see happen if it is at all possible.

P.S. A nice little bonus for me on the night, was as to meet a delightful flamboyantly dressed hairdresser (Simon) who loves Cohen and actually did Leonard's hair in London in about 2002! 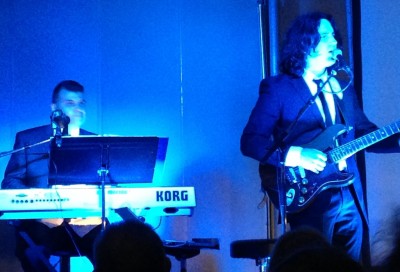 Agree with your report Andrew, except for the use of the word 'facetious', it was humorous but...maybe spell check was not your friend?
What a great venue and a perfect night!
Top

This show was so good first time around, I couldn't resist catching it again

... and it seemed even better tonight.

A nice touch during the closing Greek song was that a few people were up dancing along (as happily Greeks are wont to do on such occasions.)

I also managed to get a photo of the guys this time, which I've placed in my earlier review post. The one with me and Chris in it, attached here, was actually requested by someone else who liked my T shirt and wanted us alongside each other. She then kindly MMS'd me the copy. 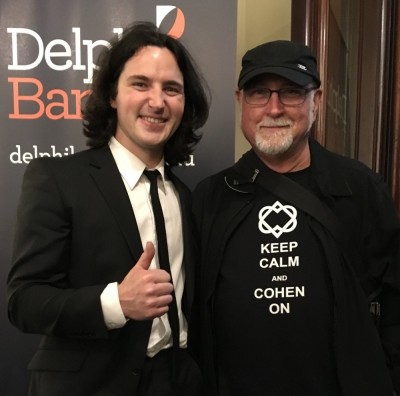 Jealous! ... but then the weather was not as perfect last night as it was last week. Were the flaps closed and did the portable heaters work well? Just interested for future visits I intend to make.

Glad you had a good night. Btw the t-shirt's holding up well!
Last edited by blonde madonna on Sat Nov 21, 2015 5:10 am, edited 1 time in total.
the art of longing’s over and it’s never coming back

We're the flaps closed and did the portable heaters work well?

but...maybe spell check was not your friend?

Spellcheck - a good friend, but an insidious enemy.

Glad to see that Melbourne is getting a supply of Leonard Cohen while we wait for the new album.

Haha, spell check and predictive text are always my enemies.
So what do you no about the knew album?
Top

It will be circular, in a rectangular plastic container or a square cardboard one.
It will contain wonderful songs.

Blonde Madonna, the weather on the night actually improved right from the outset, with the rain easing off and no wind at all.

In fact they had the flaps of the pavilion open, though the heaters were still on around the perimeter of the audience.

Alan, it would have been nice to have you join us, but, if you want an excuse to visit in the summer, the show will be repeated at least twice at the end of January; one of these shows will be in conjunction with the screening of 'Boy On A Dolphin', set on Hydra (as party of Greek Summer Film Festival)

- you can stay with me too, if you do come over for this.

As Wybe has posted elsewhere, this further revised show is being performed again over the next two nights in the lovely grounds of Melbourne's Hellenic Museum :

I'll be surprised if they are not sell-out concerts - I have my ticket for tonight.

There was a packed house for tonight’s concert and the show was even more enjoyable than the previous ones, as it has been developed and extended, with more biographical LC and historic Hydra audio-visual footage interspersed between the songs.

The musicianship was of the usual high standard we have come to expect from Chris and Spiros.

The set list for the show was as follows:
Famous Blue Raincoat
Avalanche
Nancy
Dance Me To The End Of Love
The Future
So Long Marianne
Bird On The Wire
Who By Fire
Suzanne
Chelsea Hotel 2
First We Take Manhattan
Encores:
Hallelujah
Tower Of Song

The concert will be repeated tomorrow night. 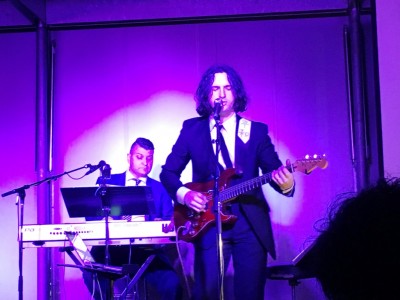