Australia Day, 26th January, 2019 was the 10th anniversary of Leonard's first local concert since 1985.
In celebration a small group of us gathered to listen, eat, drink, converse and sing along to some of his music.
6 of the attendees had been at the concert at the Leconfield Vineyard outside Maclaren Vale, south of Adelaide, Australia.
Several bottles of Shiraz from that vineyard/winery were on hand to be responsibly sipped as the evening went by.

The initial presentation was a series of poems that became songs, with Leonard speaking each poem and then singing each song. The studio album versions were chosen with one exception being A Thousand Kisses Deep. For that one, the recitation was followed by a compilation of live versions and then the studio version as the Book of Longing poem covers both. As a way of comparison the relevant lyrics were printed and displayed for perusal by the attendees.

Other printed material on display included the original concert poster (sadly unsigned) and several works of art by Geoffrey and Bev. Thank you both for your kind permission to display them, they were universally admired.
I also had some photos taken on the day of Leonard and the band; print-outs of Dean's original review and the review from the local newspaper.
To read Dean's report of the concert of 10 years ago, see https://www.leonardcohenforum.com/viewt ... 31&t=13311 and subsequent.

After a good old Aussie BBQ, the "concert" started at 7:20 pm as did the real one 10 years previously. The original play list was adhered to with the recordings being taken from Live in London and Songs From The Road. Several relevant extracts from the original audience recording were edited in to give local colour (see Dean's report).
We had a break between the first and second sets, while everyone loaded up with desserts, etc. and relaxed as the sun went down.
This year the temperature was much kinder, with the maximum being around 30C rather than 42C.

Much like 2009, the evening came to a close not long before midnight and those that had the experience of 10 years previous agreed the emotions were high, but not quite as high as being there all those years ago. In 2009 I was still "floating" at 2 am the following day.
Thankfully I can report that the "... place was [not] as dead as heaven on a Saturday night." 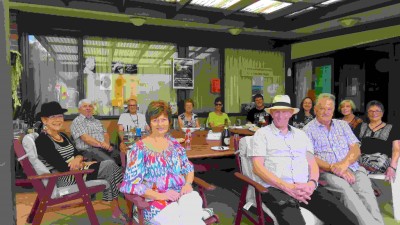 Warmest greetings to you Alan and Karin and all those at this landmark gathering!
I do recognize some familiar faces there. Glad you all had a great Australia Day! No better way to spend it

Ah, Alan, that’s so thoughtful of you to decorate "my" bedroom window with images of Leonard

Thank you everyone for your kind words about my artwork. My pleasure to be able to be a part of the celebrations albeit in that visual way.
It doesn't have to be perfect, it just has to B4real ~ me
Attitude is a self-fulfilling prophecy ~ me ...... The magic of art is the truth of its lies ~ me ...... Only left-handers are in their right mind!
Top

Thanks Alan, a great report and what a well organised and happy occasion, with it being a 10 years anniversary of the Leconfield Vineyard concert too.

I'm sorry I couldn't get along to join you all for this.

Alan ~ It was so heartening to read your report of your event; serving to carry on our tradition of gathering in all parts of the world to meet and enjoy each other, and celebrate our mutual love of Leonard. Such a brilliant idea to replicate Leonard's concert there. Thank you.

"Be yourself. Everyone else is already taken."
~ Oscar Wilde
Top

Hi there. I am new here and do not know anybody so far but I would like to congratulate you guys. Warmest greetings

Thank you, Danham.
Welcome to the Forum.
Consider contributing to the Hello, I'm new to this forum... (introducing yourselves) thread.
https://www.leonardcohenforum.com/viewt ... um#p371118