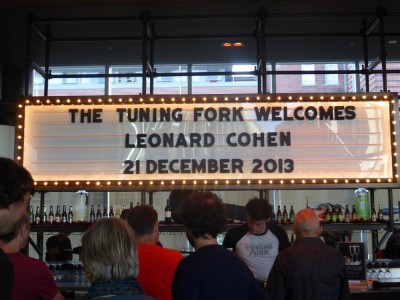 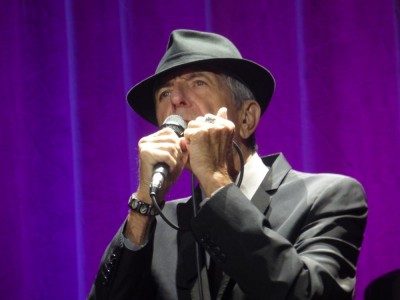 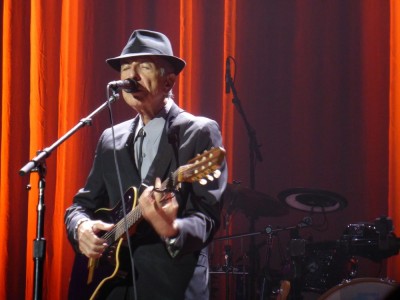 Good news! Some video from the last moments of this show.


I sooo hope we will see Leonard Cohen tour again but maybe at 79 he will decide to hang up his immaculately crafted signature hat. After 6 years of touring LC ended the 5th Encore and the end of the Old Ideas 2013 tour in Auckland's Vector Arena in this very special manner.

Waiting For The Miracle
http://www.youtube.com/watch?v=DhRDpcQzQQQ

Henry has uploaded more. I've put links to all his video from this show together here -

Waiting For The Miracle
http://www.youtube.com/watch?v=DhRDpcQzQQQ

I Tried To Leave You & Save The Last Dance
http://www.youtube.com/watch?v=WhA5vcyTGGk
Top

Thank you so much Henry, for all your videos - very much appreciated

...and also I forgot to say to Steve, thanks for your photos too!

Plus thanks to Linda, for her time and effort with relaying information not only for this last concert but throughout the years of the the tour

..... Now all we need is a long, first hand, detailed report of all this night's happenings

Thank you from me too, Henry - your videos are always so gorgeous!

And thank you to Steve for the beautiful photos too!
Top

I think Roscoe gives us a little bit of Irving Berlin (Dancing Cheek to Cheek).

I'm in heaven, and I have found the happiness I seek. These videos are so special. Thanks again Henry. Also, Steve thanks for the photos.
Top

B4real wrote:Thank you so much Henry, for all your videos - very much appreciated

Plus thanks to Linda, for her time and effort with relaying information not only for this last concert but throughout the years of the the tour

..... Now all we need is a long, first hand, detailed report of all this night's happenings

Thankyou so much for putting up these videos. The one of the last few minutes of Auckland show is just so special Also
been great to relive moments from the Wellington show.
Top

It’s hard to believe it’s been over two months since the concert in Auckland. I meant to write something immediately afterwards, but somehow Christmas, New Year, travelling back to the USA, and life in general got in the way. But it’s given me time to reflect on that evening, and to get some of my disparate thoughts in order.
My first impression of the evening was that Leonard was on cracking form. He was smiling broadly throughout the concert, dancing like a dervish, and growling beautifully. Tuned in, turned on, and word perfect. There was very little chat however, other than the usual “endangering household budget” and “humouring an old man” comments that we saw throughout 2013. At the beginning, Leonard made mention that the band had been on tour for five years, and that this was the very last concert of that tour. I thought that was a bit odd, given that there have been several tours over the past few years, but I guess there have been times when it has seemed like one to them. It felt to me as if Leonard was saying farewell, and yet there was none of the “last concert” feel about it. I was in Amsterdam last September, and that was a jovial and celebratory affair with a definite “last concert” air about it.
As he promised he would, Leonard gave us absolutely everything he had in Auckland. However, there didn’t seem to be quite the cohesion and rapport between the other band members that I saw throughout last year. I am thinking particularly of the playful exchanges between Mitch, Alex and Javier, and the flirty stuff with the girls. Someone else has mentioned here that the band seemed tired – maybe that was all it was.
I’ve watched some of the excellent videos from that evening, and it all looks fabulous – the band happy and chatty. Maybe I was just too emotionally sensitive. In the past I have often made notes throughout the concerts, but aware that this might be my last one, I decided to throw away my pen and camera and enjoy every second of the performance and I’m glad I did, but I’m not sure now if my thoughts are completely what they were then.
The crowd was great. A guy sitting next to my husband was crying all the way through, and there was a lot of adoration going on around me. Our row did get up and dance at the end, but there was no dancing in the aisles or rushing the stage this time. Even the crew were a little tardy with their entrance during “Save the Last Dance”….
I cannot fault Leonard or the band in any way though. This was a stellar performance from true professionals. Having been to a few other concerts since then, I am even more amazed at how they pull it off every time.
I hope it wasn’t the last time to see Leonard, but I felt strangely satisfied afterwards, unlike after the 2010 Las Vegas concerts when I was an emotional wreck thinking I would never see him again. I was very lucky to see him several times last year, and I’m so happy that we made the decision to go to Auckland. He is The Master.
Last edited by joyezekiel on Wed Feb 26, 2014 3:14 am, edited 2 times in total.
1976 Leicester 2008 London O2/Cardiff 2009 NYC/Austin/Weybridge/Nashville 2010 Ghent x 2/Las Vegas x 2 2012 Ghent x 2/Austin/Montreal/Quebec City/Boston x 2 2013 Memphis/New Orleans/Winnipeg/Birmingham/London O2/Amsterdam/Auckland
Top

Thank you Joy for your great concert report. I enjoyed it very much. Your honesty and passion shines through. I am just getting to read all these reports on the Auckland concert and look at the photos and videos as I was traveling and just now have the time to catch up. Thanks to everyone including Steve and Henry!
Joy I especially appreciate how you described your experience as it is truly seen from your eyes and I for one was so happy to read it. You are right…Leonard is the Master and I hope we all get to experience him singing live once again in the near future. Leslie