Review by David Gill in the Daily Review

B4real wrote:Part of his dialogue in Tower Of Song:
“You must be kidding! Is this is some sort of charity for the elderly. I know that it was nothing! You think that’s all I can do though, don’t you!” -

thank you for reminding me about this.

...and then he ran his elbow along the keyboard, loved it!
the art of longing’s over and it’s never coming back

literally purple prose that refers to Cohen as a Canadian Jew? He transcends labels like this...let alone Old Testament awe. I suspect this bloke is pulling our leg! His sport reference only supports my assumption, even I know Federer didn't make it to the final in the 2013 Open and Djokovic beat Murray (we oldies still think Federer is number 1 methinks).

Journalism in Australia is going to the dogs, a lot of what I've read in the Australian press this time round is ill informed and condescending to the musicians and their audience, I put it down to 'tall poppy syndrome' or plain old ageism (refer to above quote). He gets 4 1/2 stars instead of five, he is being damned by faint praise and yet I think this tour is even better than the last. It has a different band, they are doing new material and yet this is barely mentioned.

I prefer to read impressions of the concerts from forum members, people who really know their subject

Edited to admit that I found the rest of this review still showy but more pleasing. Liked this bit the best:


He is compelling to watch, even with the standard and somewhat minimal range of moves as he drops to his knees, doffs his hat, bows graciously to his three vocalists, Charley and Hattie Webb and his collaborator Sharon Robinson. His nine musicians led by Roscoe Beck are equally mesmerising and, at times, take the spotlight, including Javier Mas on guitar and Rafael Gayol on drums, who epitomise the musical direction of the show, which is unshowy and masterful. Not for Cohen the flashy video back drops or theatrical clothes–changes of the modern pop icon. The power of his ability to communicate with his audience, as if each one of us was the only one in his temple, makes all trickery redundant.

But did not get the 'breaking bad' reference at all

Also did some fact checking on google:

6 years ago, that's when this reviewer thinks we oldies last went to the Rod Laver Arena.
the art of longing’s over and it’s never coming back

Includes some of the opening remarks.

Includes banter with the audience before and during the performance.

I didn't get much of a view of Javier and not a whole lot better view of Alex.

Thanks for the videos Alan - so nice to revisit that night!

By the way, just a comment on 'Amen' above: I liked the variation where he added the word "goddam" to horror, to emphasize the latter.

Yes, thanks Alan - I haven't looked at them yet - running out of GB - need to recharge soon.
It doesn't have to be perfect, it just has to B4real ~ me
Attitude is a self-fulfilling prophecy ~ me ...... The magic of art is the truth of its lies ~ me ...... Only left-handers are in their right mind!
Top

Thanks Alan, great filming, you must of been as quiet and still as a mouse! I can watch them over and over again to relive my favourite bits.

Enjoy the rest of the tour,
BM

GB?
the art of longing’s over and it’s never coming back

The bevy of nubile vixens listing intently to the anaemic strains of a literary troubadour in a cafe on the French Riviera are no longer. They have been replaced by reverential hordes seated patiently, and even more intently, and basking in the presence of undoubtedly the most fashionable 70-something gent in popular music.

Mid week and not a spare seat in the Arena as the expectation builds. There was no support act, but this duly allowed Mr Cohen more time within which to enchant the audience over the course of 26 songs. The ladies man of yore is now the wise Uncle Leonard. But you would not have thought so at first blush as Mr Cohen and band walked onstage looking like more sinister elements of Sinatra's Brat Pack.

These guys looked like they "know people." But the fleeting hearts were hushed when Uncle Leonard reassured the audience that "we will give you everything we've got". And for nearly three hours they did. From Dance Me To The End Of Love to I Tried To Leave You and everything in-between.

Three encores later he did leave us. But not after a glorious and flawless flick through his vast repertoire. Bird On A Wire, Everybody Knows, Tower Of Song, Suzanne, The Partisan joined the likes of Darkness, Amen and Come Healing. There was no visual schmaltz detracting from Uncle Leonard and band. A few projections on the curtains was the extent of it. Rather it was flamenco, sweeping harp, angelic backing vocals and a band as tight as a vice. Every person on stage was accorded the opportunity to shine. The instrumentalists played virtuoso solos, Sharon Robinson and The Webb Sisters sang Alexandra Leaving and If It Be Your Will respectively.

In a paternal manner, Uncle Leonard thanked people for "not going home" after the interval and having "some charity for the elderly". These moments were answered in a Woody Allen like "You kidding me." There was also a Dylan moment when Mr Cohen picked up the guitar. One got 'Judas', the other 'Jesus'. A comment so apt and ironic on so many levels that only enhanced an impresario performance beyond compare by a man sharing his legacy. 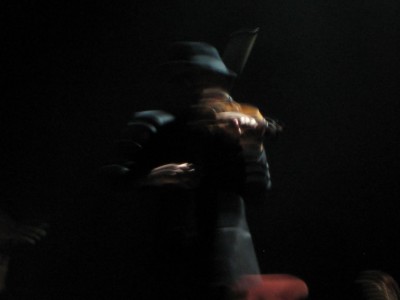 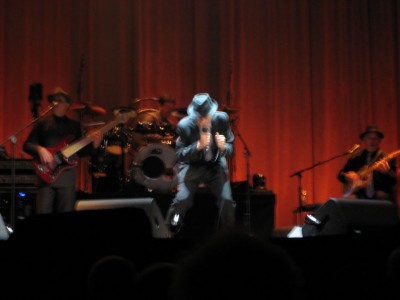 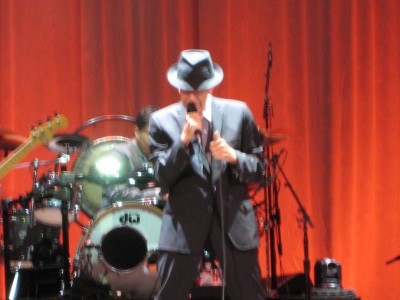 It doesn't have to be perfect, it just has to B4real ~ me
Attitude is a self-fulfilling prophecy ~ me ...... The magic of art is the truth of its lies ~ me ...... Only left-handers are in their right mind!
Top
Post Reply
31 posts