Obviously the same height as Leonard!

Yes they are both not tall

1. Dance Me to the End of Love (partial)
2. The Future (patrial)
http://www.youtube.com/watch?v=QOtBEWawe5s

9. Anthem
10. Light As the Breeze
http://www.youtube.com/watch?v=fGpfVMp9l7I

13. Show Me the Place
14. Happy Birthday (to Mitch Watkins)
http://www.youtube.com/watch?v=NIES7uPbzJ8

A paparazzi video after the soundcheck: http://www.youtube.com/watch?v=UkEDY-eJcqk

(YouTube playlist with all these videos)
Roman aka Hermitage Prisoner
Top

Goldin - thanks so much

Those in Pula certainly had a good deal
Beautiful place , beautiful weather , relatively inexpensive ticket prices and a rehearsal or 2 for free full of gems.

Wybe wrote:A few days before the concert in Pula we had a extra surprise, meeting Leonard in the same Resort where we stayed.
Picture taken by Sharon.

How wonderful for you both. And a lovely photo too!

Goldin, thank you so much for sharing. A treasure more precious than all the gems in the world together. Thank you!
And all I´ve said
was just instead of
Coming back to you.
Top

My pleasure!
I like to think we can hope for two alternative complete or nearly complete recordings of this soundcheck in the nearest future

Also, a friend of mine has recorded two songs from the August 2 solo soundcheck (and Maarten's MP3 of Banks of Marble is already online).
Looks like we can (You say that you must and you will) make a nice bootleg, in addition to (no doubt) excellent Raincoat1's recording of the concert itself (already announced on the Forum).
Roman aka Hermitage Prisoner
Top

Goldin & ilia, thank you so much for the links to the soundcheck videos, & thank you to the videographers! What an amazing treasure, indeed!!
Top

I'll give you everything I got:

Dance Me to the End of Love (partial)
http://www.youtube.com/watch?v=0NYPqxB3Wac
The recording was stopped by request of a venue crew member (to whom I'm thankful for that!)

So Long, Marianne
Going Home
http://www.youtube.com/watch?v=7j12pblnUYc
My only complete recording from this concert.

Venue before the concert
http://www.youtube.com/watch?v=7WJDFmRjufE

Venue during the intermission
http://www.youtube.com/watch?v=aywBbq6pcrg
Roman aka Hermitage Prisoner
Top

holydove wrote:Goldin & ilia, thank you so much for the links to the soundcheck videos, & thank you to the videographers! What an amazing treasure, indeed!!

Thanks so much Roman and ilia, for those unique soundcheck videos!

And Roman, I thoroughly enjoyed the new Blues song. Leonard really gets into it at one stage! Excellent guitar work all the way through!
It does remind me of the first LC Blues song (Blues For The Jews/Billy Sunday).

Many thanks to DrH for it!
It doesn't have to be perfect, it just has to B4real ~ me
Attitude is a self-fulfilling prophecy ~ me ...... The magic of art is the truth of its lies ~ me ...... Only left-handers are in their right mind!
Top

The Israeli Embassy in Croatia could not think of a more festive opening for its Israel Summer Magic events – a week of Israeli cultural events launched last weekend at the Istria peninsula.

Jewish Canadian singer Leonard Cohen, who happened to perform in Istria last Friday evening, joined the Israeli celebration after his concert, opening it with a festive Kiddush (blessing said over wine on Shabbat) together with Israeli Ambassador to Croatia Yossi Amrani.

The singer expressed his enthusiasm over the Israeli culture week, saying that was the way to create a bridge between people and cultures.

Cohen noted that he would have loved to participate in the events, but explained he had to fly to a concert in Scandinavia.

Thank you so much for posting the link, Goldin - that was a real treat!!

Many thanks also to Al for the improved version, & to DrH for making it available!
Top 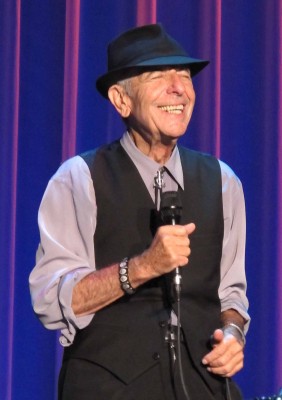 Eija's Photo Gallery is now open at http://cohen.1g.fi/kuvat/CONCERT+IN+PULA,+AUG+2,+2013/
170 photos from the venue, both sound checks, backstage happenings, and the concert.