Yesterday I saw Leonard Cohen. How I want to be old.

Video uploaded by JennesChuck - Thanks!

Waiting For The Miracle 
‏@johnjulianyoung - Moments away from seeing the Bard of Montreal! (@ Radio City Music Hall for Leonard Cohen w/ 63 others) http://4sq.com/Xy2nMp

@ElaineRonson - Wow! LC got a standing ovation just for coming ON stage! #leonardcohen

@ElaineRonson - A man w a giant square head is sitting in front of me obscuring the whole centre of the stage. #leonardcohen

@ElaineRonson - Sadly I'm out of power & won't be able to report the great conversation the two women beside me are having. #leonardcohen 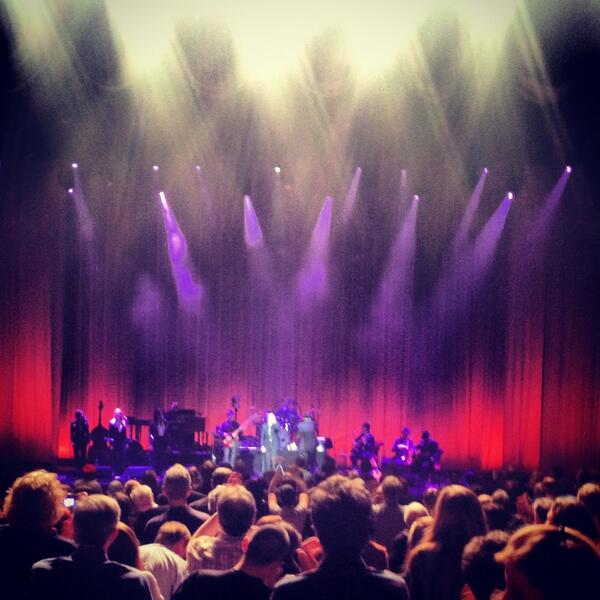 v3ronique - Leonard Cohen at Radio City Hall is quite excellent.

@jonronson - Leonard Cohen is great. I won't tweet any pics as I am not the incredibly annoying woman sitting in front of me.

‏@ElaineRonson - LC is great. Voice better than ever. Miserable as ever. Maybe more. Some truly sublime moments. #leonardcohen

@pouringdown - And the illustrious Mr. Leonard Cohen calls halftime when a much younger man would close it out, then skips offstage, a chipper devil monk.

Tonight's show is up there with one of the best concerts of Leonard's that I have attended. The crowd was much more enthusiastic and there was an energy buzzing the whole evening. Leonard's voice was so beautiful and it was like I was listening for the first time ever.
My seat was a couple rows behind Michael Moore. I moved up a few rows for the second set and was then across from him and after the concert thanked him for all he has done for the world. He said "great concert".
Leonard had a big smile for a lot of the time. He seemed relaxed and so into it. Man he was good! Beautiful performance and the band was in top form as well. Encore after encore he gave us so much. Intense and light at the same time.
Loved it...
Leslie

The Ronsons are ready for prime time. Funny comments and oh, so true. Why can't people just scooch down in their seats, shut up and watch and listen.
Scooching is so appropriate at times, not nearly done often enough....
Top

Hang in there Leslie. 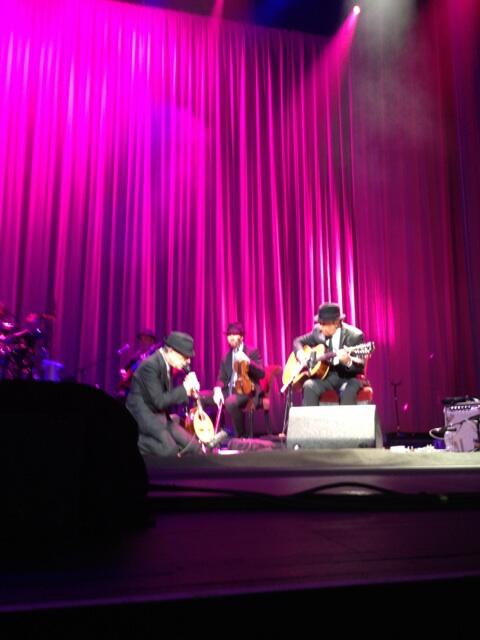 @KendraMorris- Radio City seeing Leonard Cohen tonight.. I feel bad for whoever has to sit behind my large brain.. http://fb.me/2Aqa6tKMD

@NewportJazzFest - Leonard cohen just called out the rigger by name for applause from the stage at radio city music hal... That's a class act...

@goldman - Leonard Cohen is 78 years old, played a 3.5 hour show at Radio City and skipped off stage at the end. I think he's a vampire.

@GregMitch - Just back from Leonard Cohen in NYC--late, because guy did another 3 1/2 show. Wait till he gets old.

Leonard Cohen and his ladies

As perfect a concert as you'll ever see or hear

I think this is from last night - April 6

Bird On The Wire
https://www.youtube.com/watch?v=1SA9DoJaA3c

Video uploaded by MsLakesideProduction - Thanks!

Dance Me To The End Of Love
https://www.youtube.com/watch?v=bfNVZUq5EKI
Top

@jonronson: Leonard Cohen is great. I won't tweet any pics as I am not the incredibly annoying woman sitting in front of me.


The vast expanse of Radio City Music Hall’s stage didn’t stop Leonard Cohen, 78, from running or skipping on and off Saturday night as his Old Ideas World Tour returned to New York.

No pyrotechnics or aerobic dancers pulled the spotlight from the main event. Only Cohen himself in dark suit, string tie and fedora. And his world-weary, sex-and-spirit-obsessed songs.

With 6,000 seats, the plush Art Deco auditorium, which was packed with fans and selling the few remaining tickets for $250 apiece, is relatively intimate compared to most of the arenas this tour continues playing through September.

Between skips, the spry (I use the term ironically) Cohen spent a remarkable amount of time on his knees in front of his band, delivering his lyrics like so many prayers, not all of them aimed heavenward. His baritone has grown richer and deeper over the years, limning the songs’ pungent yearnings with the patina of experience and of a life fully if sometimes painfully lived.

The concerts are pegged to his powerful and self- deprecating “Old Ideas” album, but they serve as a catalogue raisonne. The set list covers familiar touchstones from “Suzanne” and “Dance Me to the End of Love” through the excoriating 1990s “Democracy” and, from the new album, the cheeky “Going Home.”
Holy Rollers

And, of course “Hallelujah,” a song so over-appropriated by other stars (not to mention holy rollers, earnest rabbis and preachers, wedding bands and “American Idol” wannabes) that it inspired a serious book about its impact.

Cohen sneaks “Hallelujah” in late during the second half of the three-hours-and-forty-minutes concert. He reclaims it as his own, with a stripped-down version (no soaring chorus here) in which he stresses “you,” not “ya,’” in the lyric:

“Maybe there’s a God above/But all I’ve ever learned from love/Was how to shoot at someone who outdrew you...”

It’s subtly defiant, as if to renounce that illicit rhyme with the song’s title word. Take that, K.D. Lang and all ya’ countless others.

Hats off (as Cohen’s frequently is, in displays of gratitude) to the spectacular band and vocal trio of Sharon Robinson and sisters Charley and Hattie Webb.

When you wondered how much longer he could possibly go on, Cohen answered with six encores.

“I promise you that we’ll give you everything we’ve got,” he’d said at the outset. They did.

(Jeremy Gerard is the chief U.S. drama critic for Muse, the arts and leisure section of Bloomberg News. The opinions expressed are his own.)

Uploaded by DashaMoscow - Thanks
April 6 -

Video uploaded by Ricardo Rivera - Thanks!
Show on April 7

Video uploaded by JennesChuck - Thanks!

Waiting For The Miracle

Another one uploaded by JennesChuck

If It Be Your Will and Closing Time
https://www.youtube.com/watch?v=RXBQMXG-P3A
Top

No, I wasn't in Radio City incognito, but my good friend from NYC was there with her hubby.
It was their 1st LC concert and this is what she emailed me last night on the way home:


Wow!!!
What a treat for the heart and the soul!!!
Three standing ovations! He came back twice.
Amazing guy! What an artist! What a sense of humor! What class! What humility!

Guess the second best thing to sitting next to someone's sees LC live for the first time, is getting an email from one..