Video uploaded by "Keindrama" - Thanks!


Leonard Cohen
Culture, 30.09.2010, Ralf Rottmann
The Canadian played all his hits in front of 6,000 enthusiastic fans at the Westfalen Hall.

drsing wrote:Hey guys, I posted my full video recording of Avalanche on YouTube. Filmed from the first row!

This is just superb! One of my top favourites. I have not heard it live yet. Maybe I'll get lucky at one of the concerts in the final leg.

Thank you for posting it.
---Arlene

It's funny you should say that. Avalanche is also one of my all time favs. I know he has not played it very often this tour, I believe somewhere around 13 times in 200+ concerts. So the Avalanche/total concerts ratio is way off balance haha. Nevertheless, I was VERY fortunate to have seen him play it three times this tour; twice in Brussels and yesterday in Dortmund!!

For you, I sincerely hope LC plays in the concert(s) you'll be attending, for it is truly a magic moment when LC stands there all alone in that eerie lighting and plays this dark and sinister song.

Ah, you've conjured up my fantasy about future concerts after his new album is completed. Just LC with his guitar. No band. No backing singers. Shorter concert to be sure. But, oh, it would be sublime. Perhaps just his 12 new songs, about one hour plus, same length as a CD.

Just LC and his guitar in an intimate setting. Sigh ...

marjan wrote:For anyone interested, here's a link to some more of the photos I took.
http://tinyurl.com/2v5vyo3

marjan wrote:Wow, a first-row seat was a magical way to experience what will probably be my last concert of the year. Loved every minute of it. So great to hear Avalanche - right before my eyes! Even though Leonard fluffed his lines a few times, his performance was awesome as usual.

I especially love your picture #18. Thanks! 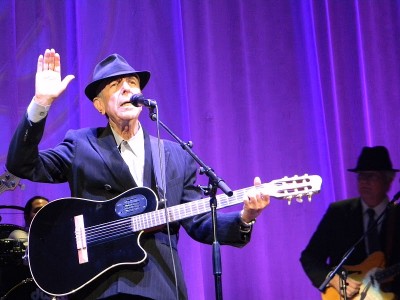 Dortmund was great!
I saw L.C. just once before, in Oberhausen '08. I have had huge expectations but than the Concert was even better.
So I always wanted to keep this Memory and let this concert be a unique experiance.
I hesitated long Time buying Tickets for Dortmund, my fear was i could only be disapointed.
I was not disapointed, not at all.
It was a different experiance, but still great. To be honest, yes, this special "first Time" Kick was missing.
But: It still was an absolute moving show! L.C. and his Band really played their hearts out. It seemed that Leonard really enjoyed himself
and had a lots of fun! I heard five Songs that they had not played two years ago in Oberhausen, and the best of all:
Avalanche was one of them!
So glad that I could not resist, glad that I took the Chance!

And an extra Highlight followed after the Concert: The Forum Meet-up.
It was really exiting and great to meet some of You in Person!
A big Thank You to You who where there for the nice hours after the great Concert and special thanks to the wonderful Henning
for his efforts as Organiser!!!!

So...here are mine (still waiting for the ones my girlfriend took...)

@ dannycarey
these photographs are awsome!!!
superb quality. Thank You for sharing!

Thank you!
Was very hard for me to get some good shots,because I had the camera of my father and I dont really know it...but Im pretty happy some pictures got good

Those pictures are awsome. Good work

Now id Borussia Dortmund could score as regularly as Leonard I guess you would be really happy!

We had super days in Dortmund with several highlights.

@Michael: One of the highlights was an English joke called Michael Leslie Dean !

Here is another video of "Aavalanche" (my personal highlight!) - slightly different perspective, taken "only" with my "normal" small photo camera though...

http://www.youtube.com/watch?v=yLvqku3pkBI
"You thought that it could never happen / to all the people that you became"...
Love Calls You By Your Name
Top

Womanfromaroom wrote:Here is another video of "Aavalanche" (my personal highlight!) - slightly different perspective, taken "only" with my "normal" small photo camera though...

Hi Ann. I watched this wonderful video before I knew it was yours. (I am intrigued by your choice of Youtube name, Keindrama).

I enjoyed it very much. Chilling and thrilling. Good capture!