tektako1 has uploaded a few short vids taken with an iphone.
Being seated far away from the stage, there is very little visual, but the sound is quite good.

During "So Long Marianne", the audience cheered and roared and had a sing-along. Very exciting.
http://www.youtube.com/user/tektako1#p/u/0/zAVpuFq7woU

During "Dance me to the end of time", the audience started clapping in time to the music.
http://www.youtube.com/user/tektako1#p/u/3/Fy3n5clD69I

Here is a link to a professional blog website which has some terrific photos from the concert.
There is one shot of the setlist included. However, there is a very strong copyright warning so photos can not be reproduced here.

Dance me to the end of love
http://www.youtube.com/watch?v=aCAzw43Mhck

On a scale of 1 to 5 id give it a 3+ because of a very conservative setlist,but on the plus side is Heart with no Companion,and the crowd was brilliant during Im Your Man.And a beautifull Famous Blue Raincoat to cap it all off.
Top

so, Sharon Robinson was there? Great! Thanks for photos and videos on youtube!
Top

luka467 wrote:On a scale of 1 to 5 id give it a 3+ because of a very conservative setlist,but on the plus side is Heart with no Companion,and the crowd was brilliant during Im Your Man.And a beautifull Famous Blue Raincoat to cap it all off.

I should not disagree with my boy in public ... Luka, you are perhaps too influenced by my immediate sort of post-concert reaction ('conservative setlist') ... They were all in great form, Leonard perhaps even more theatrical than I remember from other shows. Heart with No Companion lifted the first set and Waiting for the Miracle was superb, with reciting parts of the Flood and then singing Anthem making sure the first half ended on a high. Few words from Leonard but I still loved the genuine affection for all the band as he introduced them ... the newest and funniest epithet was, I think, "the incurable Roscoe Beck"!!! Second half has always been uplifting, and I agree with Tom that Sharon Robinson's singing on Boogie Street was just superb and she brought the house down, really! Take This Waltz was brilliant too, as Leonard interacted with first one, and then the other, Webb sisters. Like Luka, everytime I hear Famous Blue Raincoat I feel like I have been blessed and there's nowhere in the world I would rather be than listening to Leonard sing this. So, I dunno, 4+ maybe, only because it would have been great to have heard one of the new blues songs which were being played towards the end of the last tour.

In the end, though, the concert was only part of an amazing few days. I guess it was pure luck that Zagreb was the first stop on the tour but it made it special to think that Leonard and the band and the crew were almost a week in our city. Thanks again to Tom for such hard work and dedication to the cause! And - whetever else - I got to meet Leonard for the first (brief) time, and Sharon, Hattie, Charley and Roscoe again. The joke going the rounds is "Hey Paul, you know why there is no word for 'stalker' in Croatian language? ... It's because we don't do it". Well, I may be a 51 year old kid but it's nice to be part of this crazy dream! Zagreb passes the baton to Salzburg now, with some 'fans and scholars' (Sharon's beautful twitter phrase) travelling along too!

oblivion wrote:..what a beautiful bracelet does leonard wear, i´ve not seen it before

Doesn't it look as a magnetic health bracelet?!?

Arlene, as I said, I got setlist, but the stage list went different, omitting The Darkness and Feels So Good. I will post it later.
Leonard Cohen Newswire / bookoflonging.com (retired) / leonardcohencroatia.com (retired)
Top

mnkyface wrote:
It looks to me like a bracelet of Catholic saints

It is. It has Catholic saints around it. I was thinking that's popular only in Croatia, but obviously not:)

Actually, LC's is very similar to that on your link, if not the same.
Leonard Cohen Newswire / bookoflonging.com (retired) / leonardcohencroatia.com (retired)
Top

Sounds like kickoff night in Zagreb was fantastic!
I'm very happy for you guys 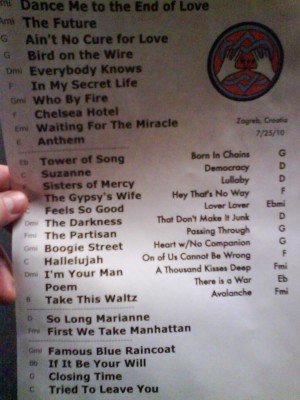 Ends with "U više od mjesec dana vidjeli smo u Zagrebu Dylana i Cohena. Hallelujah!" (Within little over a month we had Dylan and Cohen in Zagreb. Hallelujah!"
Top

OHHhhhhhhhhhhhhhhhh... reading these is taking my breath away!!! Literally. I keep having to catch it!

In one word Concert was superb beyond the words. Everything was perfect not to mention almost 40 minute performance after Leonard ended concert. Crowd was excited and Cohen's face revealed ultimate happiness. Everything perfectly tuned.
Something we shall never forget.
Top

I forgot to say that show was delayed for 30 minutes. So maybe that's why two songs from announced setlist were omitted. But the announced end time (on the printed sheets near the stage) read "end time 23.10" and it ended at 23.40, so the planned 3-hour show was delivered.
Leonard Cohen Newswire / bookoflonging.com (retired) / leonardcohencroatia.com (retired)
Top
Post Reply
188 posts