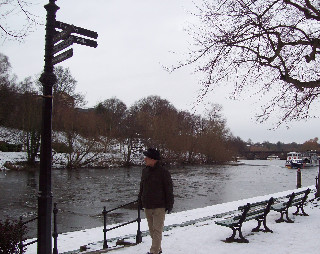 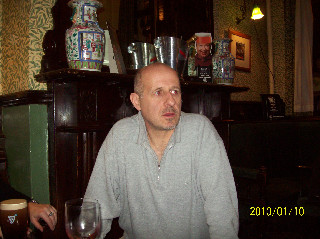 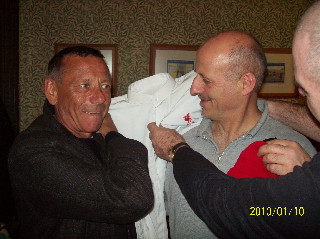 He may have taken the shirt off a Scousers back, but he still refused to lift his curse from Anfield. Liverpool 1 Reading 2
Shirt off his back_edited-1.JPG (32.89 KiB) Viewed 8599 times 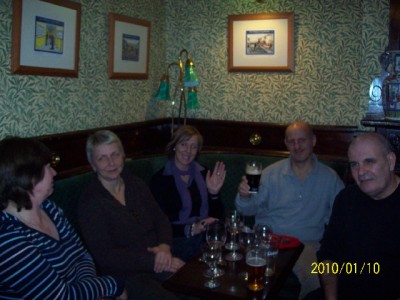 despite the freezing temperatures and appalling weather conditions I think those that were able to make the journey to liverpool managed to enjoy themselves...

a few friends had to drop out at the last minute…..poor diane down there in spoth wales was suffering with a cold…deirdre over in ireland was snowed in…and judith was laid up after falling on the ice only hours before she was due to travel….ladies we did raise our glasses to absent friends a few times over the weekend

however our intrepid and resourceful german friends in the form of henning, elke and kerstin managed to beat the weather and arrive safely late on Friday night
joe from galway also managed to miss the worst of the weather by arriving early on Friday morning and was soon spreading his irish charm in and around the city centre hostelries

friday evening found us all in liverpool’s ‘pub of the year’ the ship and mitre followed by a very very late evening in liverpool’s oldest irish pub flanagan’s which according to joe sold the worst pint of guinness in town…I think he was glad when he had managed by 3am to force down his 10th pint of the dreadful stuff….the rest of the evening is something I would personally like to draw a veil over….

on saturday margaret travelled in from chester and joined us for our day of sightseeing around Liverpool….we started down on the river with a trip on the ‘ferry across the mersey’ then a look around the albert dock including a look into the Tate gallery where I tried in vain to go someway to explain Rothko’s Seagram murals to henning…however later kerstin gave us a very interesting urology report on the male private parts of jacob epstein’s magnificently sexy sculpture jacob and the angel….a work that we all agreed would make an excellent cover for a Leonard album..then on up through chinatown to the anglican cathedral where some of us sat in for part of the choral evensong service…..after leaving the cathedral our party split into three groups…one group went shopping…one group went to the pub while the third group carried on to the catholic cathedral aka paddy's wigwam and then to st george’s hall……we all regrouped a couple of hours later in the cavern club where paula and her daughter megan plus megan’s boyfriend rob joined us for a couple of hours of beatle music….then it was over to the cavern pub to listen to a 30 minute drum solo hey ho……our new forum member linda who some may remember from our wonderful barmouth trip then joined our party for a meal ,drinks and laughter…followed by yet another very long night with the first goodbyes of the weekend…joe had to fly back home to galway early Sunday morning…some lame excuse about something called ‘work’…

sunday morning found us on the train to chester……a pleasant but very cold walk through the historic city centre then down to the river…followed by look around the shops and yet another visit to a cathedral where once again we enjoyed the choral evensong service….margaret then invited us over to her house where we met john slaving away over a hot stove….john and margaret soon had bowls of homemade soup and scouse on the table which went a long way to defrost our poor frozen bodies………after a very pleasant time sitting around in john and margaret’s discussing all manner of things both forum and non forum it was soon time to head back to liverpool…..our last night together was spent in the lion pub where we met a liverpool football fan who stripped off all his football paraphernalia that he was wearing in the form of a liverpool football club belt and buckle, followed by his prized red woolly hat and finally a liverpool football club shirt and presented them all to a very appreciative henning…..then lots of goodbyes and kisses with shouts of see ya in zagreb…see ya in krakow ….see ya in wetzlar…echoing thru the cold liverpool night air….

did I mention that the liverpool v tottenham game because of the bad weather was cancelled?….well it was..
…in all seriousness I do have to give henning his due….not once over the weekend did he complain about the game being cancelled…he acted with complete grace and charm despite his obvious disappointment

I have a many favourite moments of the weekend….one was when henning walked into margaret’s dining room and looked in sheer astonishment at two beautiful framed bob dylan signed paintings on the wall and uttered the immortal words….’oh my god he really can paint’ ….so thanks to Dave and everybody else for helping to make the weekend so enjoyable…… 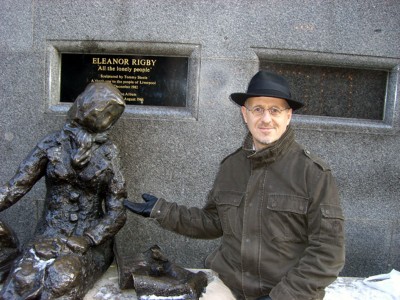 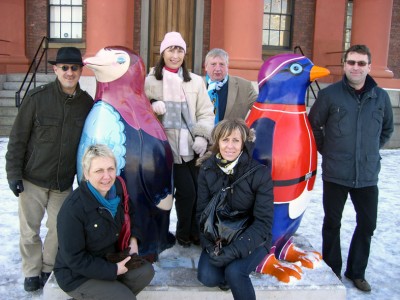 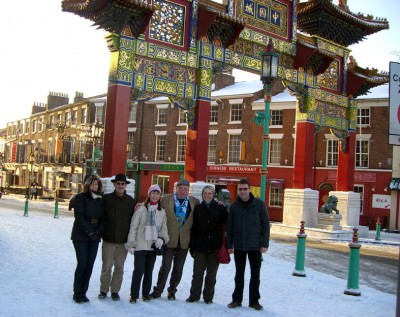 as i said in my previous post i only took a handful of photos over the weekend...where are wjibe and diane when you need them.... 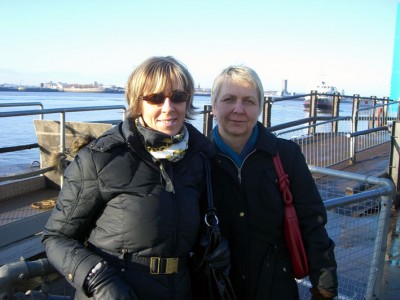 kerstin and elke with ferry approaching in background 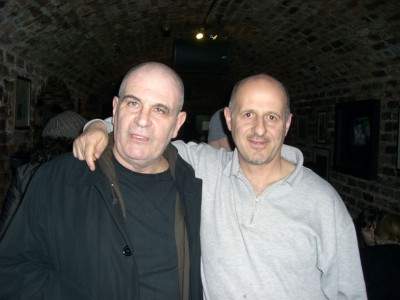 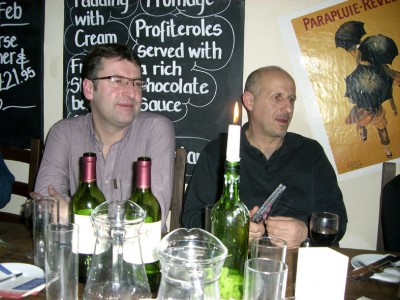 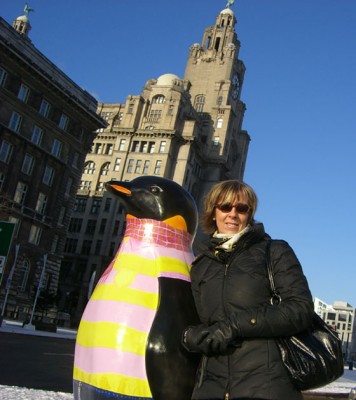 kerstin with penguin and liver birds in the background 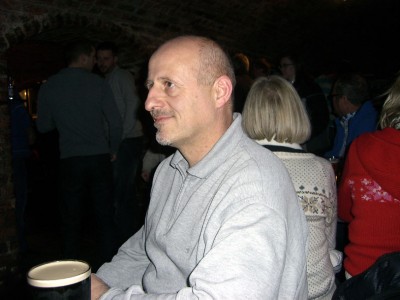 henning in a thoughtful mood over his pint of guinness 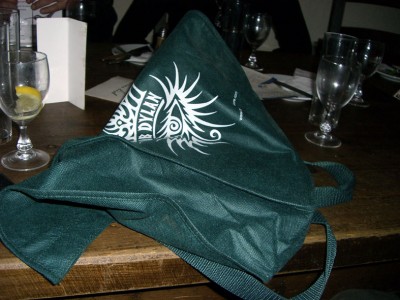 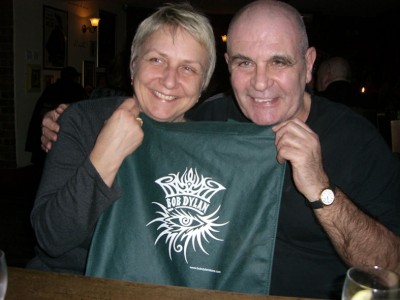 elke and i holding up my christmas present from finland 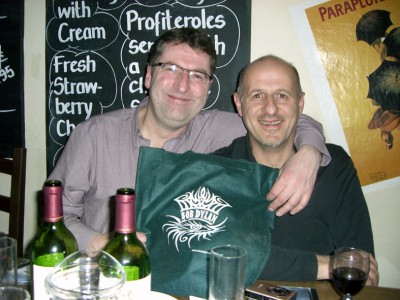 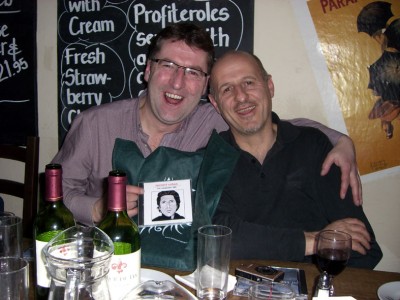 Thanks for the photos- seems like you managed to have a great time despite the weather.
I'm so sorry to have missed it all- damn ice and damn dog for needing walking on said ice. I really couldn't have hobbled very far last weekend.

Hope to meet you all again- possibly in Krakow?
Top

Thanks for the reports and the photos. It's great to see everyone enjoying themselves. I really wish I could have made it. Meet-ups are like buses -If you miss one there's always another due

liverpoolken wrote:
did I mention that the liverpool v tottenham game because of the bad weather was cancelled?….well it was..
…in all seriousness I do have to give henning his due….not once over the weekend did he complain about the game being cancelled…he acted with complete grace and charm despite his obvious disappointment

The Cavern Club on Saturday Jan 9:

The Cavern Pub on Saturday Jan 9:

Really sorry I missed this but I was pretty sick that week:-( It's great to see you all had a fine time, again. Very nice pics and videos.
Top

’oh my god he really can paint’

Halcyon Gallery presents an exclusive exhibition of Bob Dylan’s first paintings on canvas, based on drawings and sketches made while on the road during the period of 1989 - 1992. These paintings are the grand finale of The Drawn Blank Series and testament to his artistic progression: from drawings to works on paper and now finally to canvas. This exhibition provides a unique opportunity to see the first original masterpieces of a creative legend...