Perhaps it has something to do with the rich volcanic soils washed up on the Maylands Peninsula, around that gentle bend on the Swan River, or perhaps an inherited gene that scrambled to be recognised in a boy forced by circumstance to leave school at the age of 13yrs.

Whatever the inspiration, these days, 65 year old Robert Hitchcock is a world renowned sculptor, whose commissioned work is in such demand, he has no need of a secondary job to support his passion and talent. He is also an avid Leonard Cohen fan and is currently finishing a limited release of busts of the revered Canadian artist.

West Australians are probably unknowingly familiar with much of Robert’s work – it’s in places as diverse as the Alexander Library, towns such as Moora and Merredin, corporate offices and private collections all over the world. Here is a man who toured Australia with Rudolph Nureyev in the 1970s, in order to sculpt the great dancer. Robert tells a marvellous tale of Nureyev praising one of the busts in Melbourne and a week later, smashing it to pieces in front of the then Governor General, Sir John Kerr.

Anyone who has visited the SAS base at Swanbourne, will be familiar with his astounding statues and a walk through his studio is a revelation in terms of instantly recognisable local and international people as well as a plethora of works in various states of preparation. It is a remarkable place in an unassuming Morley side street, close to the Galleria Shopping complex.

We wander outside to look at my motorbike, agreeing it is in itself a living sculpture. “Almost died in the 1960s on mine, “ he said, “I was paralysed for a while, the right leg’s full of bolts and pins.” His is an astounding story, too long to relate here, yet his dream is not of fame for himself, he is passionate about Australia and in particular, the many achievers in the West, both famous and unknown.

He wants to do a series of sculptures of those who have contributed to society, ”Not sporting heroes as such,” he states, “The donors to medical research, the surgeons, the educators, the builders, the dynasty founders, the dreamers.” His enthusiasm is infectious and I found myself agreeing to help him contact some of those who are most surely worthy, for there is something about a sculpture that captures the soul and essence of the subject. Sculpture has a tactile, real presence, unachievable in painting and photographs.

For the Leonard Cohen fans (and I confess I've ordered one - in the cap), there will be three different busts, cast in bronze in two different sizes. Unfortunately there will only be 15 of each, all numbered, The large busts are priced at $8,500.00, the smaller at $5,500.00. (plus shipping). The good news is, they will be ready in two weeks, just in time for the Master’s visit to Perth.

I leave him on a quiet hot Sunday afternoon, standing quietly amongst his library of books on art, music, history and people. Robert Hitchcock and his studio are most assuredly one of Western Australia’s hidden treasures.
© Greg Ross 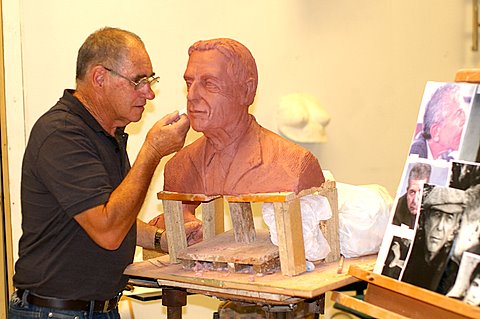 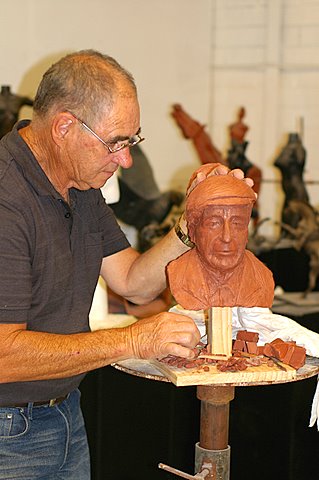 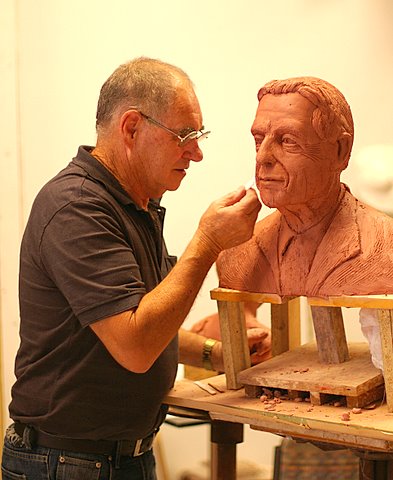 Doesn't look recognisable to me. Perhaps the sculptor should try to meet Leonard in the flesh the day after the 7 February concert in Perth. It is always dangerous to try to create a sculpture from photographs only. And to be successful, a bust would have to capture Leonard's impish humour.
“If you do have love it's a kind of wound, and if you don't have it it's worse.” - Leonard, July 1988
Top

I do see what you mean with a touch of the Windsor bloke, however in support of the sculptor, he was very reluctant to have the works photographed, as there was still a lot to be done to them, I've since been back to the studio and the likeness is quite stunning (there is a third bust as well). I love watching recognisable shape and form appear like magic out of clay and stone and wood. Anyhow, once they're cast, I'll take some more photos, of the finished product.
Cheers
PS: I think Everyone might enjoy this clip: http://www.stuff.co.nz/videoplayer/138174a14797.html
All Good Things
Greg
http://www.gregross.com.au/
Top

Greg Ross wrote:PS: I think Everyone might enjoy this clip: http://www.stuff.co.nz/videoplayer/138174a14797.html

I don't think the maker of this film has the slightest idea what happened in Tiannamen Square on 4 June 1989. Fireworks from the Olympics? I think not. 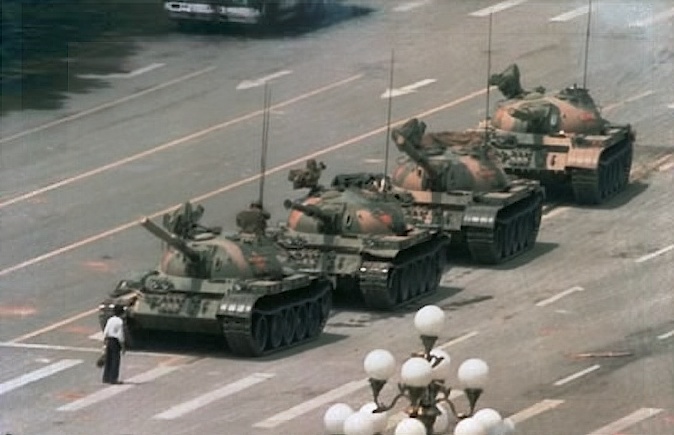 Things are obviously a little bleak over there, sorry to hear that (intuitively speaking) - I think LC has the right phrase - "There's a crack in everything, that's how the light gets in." Actually, he has another gorgeous line which sums up the dichotomy of differing views ..." but that don't make it junk."
Cheers
All Good Things
Greg
http://www.gregross.com.au/
Top

Thank you for directing me here, Ann. Certainly, Robert as the creator and knowing well the continuum of the process, knew that his own reluctance was warranted... yet, very generous to allow you your photos, Greg

. His finished product is stunning.

Years ago, my friend asked me to sit for a sculpture and, though dismayed by seeing it in progress, I was thrilled with the final piece... however, before it could get fired, she had to move from the space and, somehow in that process, it got lost

. I would have loved to have had it. You're so right on the presence that sculptures have... like having another person in the room.

An artist-sculptor gave me an amazing piece of a woman and it had not been fired. I held on to it for several years, and as I watched it begin to break down, I took it somewhere to have it cast in metal [don't recall which one... bronze or what?], and was never able to get it back. One excuse after another, with something like it broke or whatever. I never could believe that, but felt unable to do anything about it at the time. I'm glad to still at least have a photo of the artist with it. Sculptures move me.

Robert sounds amazing. So glad to see how his interest includes people who are noteworthy, albeit unfamous

. Such a pleasure for you to know him. Unfortunately, I could not even afford 10% of his lowest-priced version

, so I won't be contacting him to try to bargain a lesser rate... not that he would even consider it, but even if he would

Hey there Lizzie ... and everyone else.

I've got what I think will be pretty exciting news for everyone who is interested. There's been a lot of commentary and compliments about the bust of Leonard onn my piano (in the You Tube clips) and it seemed a lot of people were in the same situation as our gorgeous Lizzie, so I rang Rob (the sculptor) and asked him if there was any way he could do some cheaper busts especially for Forum members, (he's a Cohen fan just like the rest of us).

He's decided he can and we're going to sit down at his studio this coming Saturday and work out a strategy for everyone. Basically what he’s decided, is to offer probably three different busts, one of Leonard without a hat, another with the cap (as per my bust) and another with the Fedora.

They won’t be numbered, so it’s important to understand that they won’t increase in value as limited edition works of art, BUT, he’s going to sell them direct to Forum members at $300.00 US plus post and packaging, which he’s investigating at the moment, he feels it will probably be around another $75.00 - $80.00, which is one heck of a deal and suddenly makes it possible for a whole lot of people to have their own sculpture.

I’m going to video him working on the busts and talking to you all, then we’ll post it here, probably on Sunday and you can then contact him direct if you’d like to order something. It’s a pretty special thing to do and not what he normally does, but hey, he’s a good bloke and one of us.
All Good Things
Greg
http://www.gregross.com.au/
Top
Post Reply
8 posts • Page 1 of 1