Many months ago, when the dates for Dublin were announced on here, I posted saying I would be seeing Leonard a day after my twenty first birthday, and I know now that whatever age I live to, I will never receive such a gift as truly mesmerising and unforgettable as Monday night's show.


I went with my girlfriend, who's seventeen, but loves him just as much as I do. Our parents were fans of his long before we ever came to live, and now we've carried that torch, too. I hate to admit I adore certain things that my mother enjoys, but it's worse to lie to the heart.


I was sitting in the front row, just left of center, for those who were beside me and all around. I will not go into detail about the concert itself; words, though beautiful, just can't do justice to some things. This was an immensely special night, and one I'll never forget.


However, I'll mention a few things:

(1) - Away from the man's singing, his special words of the heart, and sheer charm, an aspect of his performance that I nearly found most enjoyable was his silence - when the band played, when the girls sang, he become a member of the crowd, lost in the beauty of the night. That was something special, alright.

(2) - Certain lines grab you. One especially did for me: Closing Time. That line "and I just don't care what happens next" really, to me, summed up the night. We all live with our private despairs, but music can lift us off into another dimension, free us of trouble's cuffs, make us smile. No one in the crowd, no one on stage, really cared what happened next. Beauty had taken hold, we were invincible.

(3) Each time he danced off stage, you could imagine him not stopping as he journeyed through the labyrinth of the backstage, and finding his way again, much to all our delight. Yet when it was time to say goodbye, he waved twice, and left the stage through slow steps. I watched him as fell behind the curtain, almost reluctant to put an end to such a wonderful night.


I hope my thoughts have not been too long for those reading, but I felt I had to put this down. I found Leonard's music at a tme when I needed him, and enjoy now more than ever now that I'm with someone I truly love. Who knows that the future holds, maybe we'll never see him again, but that image of him dancing off stage, of closing his eyes, lost in the delirium of the music, and the feeling of not caring what happens next are eternal.


P.S here are a few photos

Mark - beautiful and definitely not long

Thanks for sharing Mark, a beautiful story. I'm always amazed at how similar everybody's accounts of the concerts are. At my first gig last year I also immediately thought it is such a religious experience (like somebody else pointed out earlier). I also loved his silences and gracefulness throughout the whole night. It has a healing quality that people only understand if they've witnessed it for themselves. In fact, it reminds me a lot of the feeling I had when seeing the Dalai Lama a few years back (don't want to offend any practising buddhists, just trying to find a fitting comparison). I'm always struggling to find a superlative that fits the phenomenon that Leonard is, think we need to come up with a new word that describes the best of the best, better than all the rest. But some things just can't be put into words and maybe that's the way it should be. If you have that feeling in your heart, you just know.
I lit a thin green candle {in Barcelona} to make you jealous of me
Dublin 13th July 08 - Lucca 27th July 08 - Dublin 19th, 20th, 22nd, 23rd July 09 - Barcelona 21st Sept 09 http://lifeisafestival.wordpress.com/
Top

A review from State magazine -
"The last time this reviewer saw this much Leonard Cohen music, it was a pain in the arse, literally. The contrast between the old Point Depot that night during an often inspiring three and a half hour marathon tribute set (that resulted in a numb posterior) with the wonderful layout in the new O2 could not have been greater. Hard seats and dubious sight lines have been replaced by an awe-inspiring fully-seated comfortable amphitheatre with precision sound (perhaps not loud enough in the Mars seats) and a sense that finally, here is a purpose built venue where you can shell out top dollar and feel like it’s worth it.

It helps of course that in front of us is an artist who can lay claim to a lifetime’s songwriting catalogue comparable to that of Springsteen, Dylan, Young and Waits. And with Cohen the contradictions and contrasts could not be greater. The first half (act?) a slick, smooth performance (in contract to fellow Canadian Neil Young’s jagged, eclectric, forceful performance at the same venue) was underpinned by his wry sexual one liners, a spiritual songwriter with a lived in insight not bound by religious paranoia or repression. Whatever about his great band (more on them later), it’s Cohen’s soulful delivery and transcendental lyrics that steal the show. Even amongst his contemporaries it’s hard not to think that lyrically Cohen is the king, effortlessly weaving poetry into his stories and an unworldly command of the English language. And the band, well, bandurria player Javier Mas comes close to stealing the show a number of times, a humble yet graceful player, there’s no attempt to do anything except give life to Cohen’s incredible songs. At one point during his solo spot, the venue is his as he glides and plucks his away around a fretboard making a nylon sound that has us all (including Len) spellbound. The Webb sisters and Sharon Robinson provide exemplary (often astonishing) soulful backing but some of the arrangements have become bland in their slickness and the showboating from Dino Soldo around the saxophone solo’s (the one flaw in the show) is as discomforting and banal as Cohen is exciting and graceful.

When Cohen comes out after the break, he ditches the band for a pared down ‘Tower Of Song’ and tower it does, “I said to Hank Williams: how lonely does it get? Hank Williams hasn’t answered yet” sends a shiver up the spine. ‘Suzanne’ draws a huge intake of breath and ‘Hallalujah’ is simply astonishing, slaughtering the notion that any of the ‘Nobody’s Got Talent’ contestants will ever touch the heights of the great songwriters or are anything more than a temporary fix in a broken, vapid, ultimatley meaningless celebrity culture. ‘If It Be Your Will’ is another moment, Cohen leaving the spotlight before the Webb Sisters astonishingly take the song higher. ‘A Thousand Kisses Deep’ then resulted in weeping in the isles.

Seeing 10,000 people rise to their feet to applaud the most gracious performer on the planet, one cant help be moved that a mortal songwriter can inspire so much love from an audience. There’s a great moment going on in modern culture right now with Neil Young, Springsteen and Leonard Cohen offering more insight, spirituality and wisdom than any church made of stone ever could.That moment won’t last forever, revel in it whilst you can and if you havent caught Cohen yet, do so. "

Quite! What they call a "flaw", I wouldn't want to do without!

Lonesome Pine wrote:There’s a great moment going on in modern culture right now with Neil Young, Springsteen and Leonard Cohen offering more insight, spirituality and wisdom than any church made of stone ever could.That moment won’t last forever, revel in it whilst you can and if you havent caught Cohen yet, do so. "

Couldnt agree more with this,i saw all three in Dublin over the last few weeks and they were all outstanding,im too young to have caught them when the were young and supposedly at their peak but i honestly cant see how they could have ever been better then,all gave 110% and were among the best gigs ive ever seen,ive left other gigs by "legends" and felt it was great but i couldnt help thinking of what it must have been like back in the day(Waits,Bob..etc)i didnt get that with the above three,i just felt it was as good as it could possibly be at anytime.....the oldies are on fire at the moment putting bands half their age to shame!

Oh and i like seeing Dino giving it loads,why the hell not? a musician enjoying themselves is a rare enough site nowadays(ever seen Dylan and co.?

Lonesome Pine is referring to the Came So Far For Beauty Tribute concerts which took place at the Point in October 2006. Some great acts - Lou Reed, Nick Cave, the Handsome Family, Antony etc. but visibility lines and seating were far inferior to the O2.
Those who earnestly are lost
Are lost and lost again

Lonesome Pine is referring to the Came So Far For Beauty Tribute concerts which took place at the Point in October 2006. Some great acts - Lou Reed, Nick Cave, the Handsome Family, Antony etc. but visibility lines and seating were far inferior to the O2.


I was in Australia when that show was on in the Sydney Opera House(Jan 05 i think)lived up the road from it but it was too expensive for me at the time and i remember thinking it would be a bit depressing going there seeing other people singing his songs,would have really hammered home the fact that Leonards touring days were over and id never see him

Perhaps I should have pointed out that the author of the review in State magazine was Dave Roberts, I merely posted the review on this forum. I am not the author.
Top

For those who are not on Facebook here is a link to the photos on my Bebo page. Click on an image to enlarge....

These are a few of my photo's from Wed 22nd July.
Taken from Row F of the flat seating.
Kind Regards, Joan. 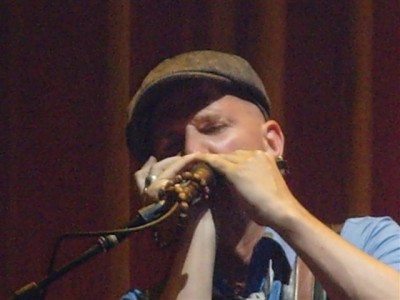 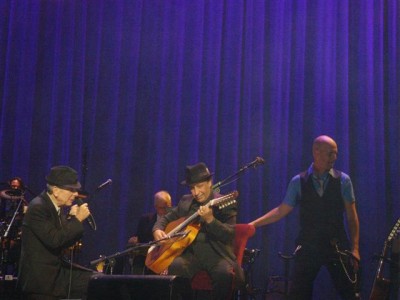 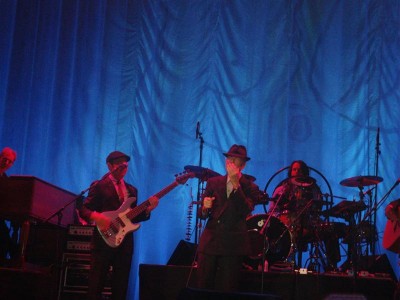