I know, I have a name made for misspelling, too...

IF the banana wasn't intended for Leonard, but for "the" monkey, the monkey has the plywood violin with him! The monkey's name is Fred; cf. here: viewtopic.php?f=35&t=14413
"You thought that it could never happen / to all the people that you became"...
Love Calls You By Your Name
Top

A few impressions from a visitor to your city, if I may:

* It was wonderful to meet so many people from the forum: Maarten, once again (sorry I didn't get to say hello to your parents again though), Midnight Choir, Nicholas, PE and so many others.

* I have never been in such a hot venue in my life! Don't they have air conditioning in that place? Leonard and the band were melting before our very eyes (and we weren't doing much better) .... My husband said he thought Leonard looked tired and near collapse at times. If he was I'm sure it was down to the intense heat and nothing else.

* As I've written elsewhere, I was very moved by the dedication of the show to Yasmine's memory. I enjoyed the CD that was played before the show started then I realised who it was after Leonard dedicated the show to her.

* What a wonderful atmosphere there was throughout the show, despite the heat. Everyone was there to enjoy the concert, not just to drink beer or have an evening out. (A welcome change from Berlin, where I was surrounded by talkers and people out to party). Was it my imagination or was the whole crowd singing along for some of the songs?

* I loved the spontaneous ovations that built momentum and echoed around the arena 2 or 3 times during the evening. I can't remember ever hearing the foot stamping at any previous shows, and I have been to rather a lot now.

* It was truly special hearing The Partisan being played to a Belgian audience. The crowd on Saturday night truly understood what the song was about and felt every word. Mesmerising!

I hope I'm wrong but I doubt if the Uk shows will be able to match Antwerp for atmosphere.

Indeed singing The Partisan (with some parts in French as you know) in the home city of Vlaams Blok is audacious... but the audience appreciated religiously.
I also noticed a few words in Dutch 2 songs later in Halleluyah !

Again a salut to Maarten.
Nice meeting you and your parents and the wonderful town of Antwerpen.
We (Hans and Daniella) met you when accidently sitting a table beside your family in the Time-Out.
Later again after the concert, when leaving the same place.
Thanks for the pictures you showed above.
Your enthusiasm and support for Leonard Cohen's performances are unmatched for a youngster like you.
Keep this open mind for the rest of your life.
It will benefit you for ever after.
If I were to wear a hat, I would take it of and bow to you.
Groeten aan je ouders en wens hen sterkte met het vinden van een nieuwe hobby.
Zal niet eenvoudig zijn.

The Antwerpen concert was amazing.
So long Marianne must have been sung along by at least half of the audience.
I am still replaying the concert time after time in my head.

Mr. Cohen I really think you have no clue as to how many lifes on this planet you have touched and influenced. There ain't no cure TO YOU !
I would gladly meet a formidable person like you again in a new 2010 tour.
But with all due respect, if you would choose to relax on some tropical island for the rest of your days, go ahead by all means. You deserve the best.

Thanks to all performers on- and backstage.

Any one got an idea at how to submit some one for the Noble Prize in literature?

Kind regards to all Cohenists
Top 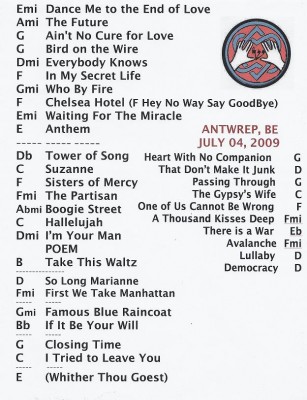 Ingrid wrote:
I posted more videos from Leonard on youtube, first time in Brugge as well as from Brussels. You find them when you surch under the following name " Leonard Cohen tainaingrid" and then you have all the videos. Some are quite good and some are a bit lessof quality . It's not easy with a small photocamera,but I did the best I could. With the final, " Whither thou Goest" we just had the chance to stand in front of the stage, great, great,great! Will he ever come back again? I hope so, he's so sublime,
Greetings, Ingrid

Hi Ingrid, Your "Whither Thou Goest" video is so wonderful and thank you for sharing it us! You can almost feel the heat emanating from the bodies of everyone. So special to see Roscoe with his son! Leonard seemed to introduce even more of the crew than usual.....even using Joey Carenza's whole name plus the "third"! The dedication to Yasmine was also a lovely thing to do. And, you even captured the banana incident at the start

! I wonder who threw it? I'm sure it was meant as a little gift for Fred who we hope to see a photo of very soon!

thank you maarten for your nice pics!
always fine one can rely on a good photographer!!!
Top

Well, I have just viewed Ingrid's YouTube once again and have a VERY important question! Loved the look on Leonard's face when he picked up the banana from the stage, BUT, although the video is a little shaky at the start.....was that by any chance FRED with Rosecoe's son?????? Perhaps it's just wishful thinking but the size and the colour sure looks like the back of our little Fred. Wendy said she had no sighting of Fred in Berlin or Antwerp but perhaps she might have missed him at the end. Help!

Diana,
I have just watched Ingrid's videos - good stuff.
I must say that during 'whither thou goest' the 'object' that looks like Fred (same colour/size etc) is, I think, the flower/s that are passed to Sharon Robinson. You can see them more clearly, in Sharon's left hand, a little later in the video.
However this made me wonder whether Fred/his minder still visited the forum...and sure enough 'The Monkey' last visited on 6 July?! ... so he's still around!
Dave
"Politics is the art of looking for trouble, finding it everywhere, diagnosing it incorrectly and applying the wrong remedies"~ Groucho Marx
Top

but perhaps they were drooping in the heat! Perhaps I was just getting my hopes up at seeing the little guy. There have been a couple of "off-stage" sightings. He is sometimes perched for a short time on equipment just off stage right.....and usually it seems that "someone" may be taking a photo of him. Yes, I do think Fred and his person (sad, isn't it...I'm referring to Fred like a real person!) do drop by! Hopefully we'll have some photos soon.

Thanks for the heads up on the flowers!
Diana
Top

Hi Everyone
My first contribution to the forum , I`m sure my offering is far from perfect and it`s all been said before.
I am in reality a practical and non - spiritual person in my fifties but LC still strikes a chord inside with his words and music , moving me close to tears at times and I even get moist eyes reading the forum.
Although I have been a follower for many years I didn`t think I would see the great man live.However my wife and I made it to Birmingham last year and followed up with Antwerp this year.
I thought Antwerp started a little flat but the second half was superb as the interaction between Leonard , the band and the audience seemed to grow and grow.
Contrary to other coments I didn`t see Leonard fatigued , rather he was energetic , enthusiastic and even impish at times ( not bad at 74 ).
Love LC , love the forum.
Kind Regards
Top

I loved the Antwerp show a lot, it was my second LC gig.
the first was the unforgetable intimate show in Brugge last year.
I never heard a band sound so good at the Sportpaleis.
It was nice to see younger (I'm 25) people at the venue.

I want to see the show again...

ps. Is there a recording (torrent) of this show?
Top
Post Reply
53 posts