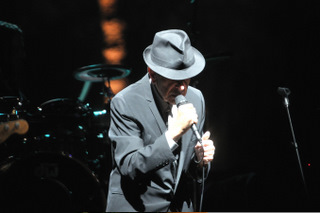 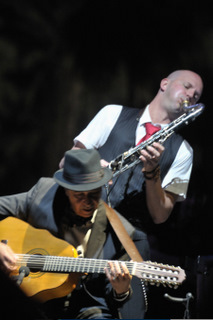 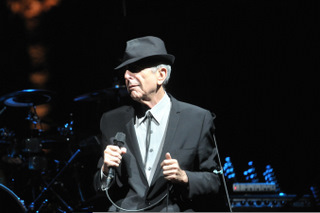 I really like the first one of Leonard, too, gbindman... I just love the lighting on so Many of these! You really captured Dino blowing his horn

I have been watching and waiting and looking in vain for Jazz411 to report back to us on Coachella!! I know she was going! C'mon out and tell us about it, Jazz...

~ Lizzy
"Be yourself. Everyone else is already taken."
~ Oscar Wilde
Top

Great photos - thank you! Love all of them, but my favorite is of Javier and Dino - fantastic composition!

Thanks for solving the 'blue ribbon' mystery for us!

Thank you for the compliments on the pictures. I was shooting for Goldenvoice (they run Coachella) and I had to shoot from the audience, because no photographers were allowed up by the stage. It was a challenge because there were many shots wih people's heads and hands in them...LOL. What I can say about the folks around me was that each one had an emotional story of what LC meant to them and why they were there. Most of the younger fans watching other groups had an attention span of about two minutes before the cell phone was put into use! But everyone at this show was totally into it, and we all appreciated seeing the joy of LC while he was performing (until Franz Ferdiand started that is...).
Gary 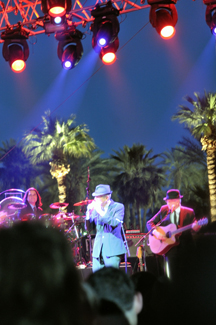 Another photo with such beautiful, vibrant colors. I hadn't even noticed you had the problem of having to shoot over peoples' heads and hands. Really does not take away from your photos, just seems to frame the subjects

You're right on that composition, Mary

. And such great news about the raptness of the younger ones watching Leonard. The older ones are all but a given... but the severely compromised attention spans of younger people in today's world... well, THAT is saying A LOT!

Thanks for sharing these... and do you happen to have any of those emotional stories you listened to in print anywhere?

You did a great job for your bosses. Compromised conditions and you prevailed.

Jazz Report on Coachella:
Okay Lizzie here you go ... it's only going up now because I left right after the Coachella Music Festival weekend for NYC and the Tribeca Int'l Film Festival. (I carried LC's old friend Hazel's video camera with me - and stayed with our mutual friend Kati in Manhattan. Hazel left her camera in Hydra last October - where I last saw her -and it was brought to my house by another Hydra friend who took it from Greece to San Francisco- but I digress...
Leonard was superb in Coachella. Our only regret about his performance was that it was too short - we had purchased the tickets for Coachella before his Nokia Center concerts were announced in L.A. Otherwise we would have gone there (much closer to where we live) and enjoyed 3 hours instead of just one and a half. The crowd was so responsive and enthusiastic - all joining in on the chorus of Halleluiah and demanding (respectfully) encore after encore... only problem was because I am short (5'1") and I had a hard time seeing him for some of the numbers - as it was standing room only - no seats except the grass.
But everyone was so in love with LC, I could stand and just enjoy the music I've known and sung over so many years and forgive the incessant picture takers who continued to block my view... it was a beautiful night. We (my partner and I) didn't really enjoy much of the other music however and without a doubt Leonard should have been on the main stage (where there was giant video monitors & screens) instead of Morrissey. Morrissey!! Holy cow - what a disappointment! He was like the anti-Cohen. I know he has a following (of mostly discontented disaffected wannabe musicians) - but hell, at 54 (almost as old as me myself!) that tortured and angry young man act is really OLD (and so is he!). My favorite anti-Cohen lyric of his: "close your eyes, picture someone you physically despise... then kiss me" - I'm not joking here folks, at one point he asked the audience "Can it get any worse?" and I turned to M. and said "Not as far as I'm concerned!" The only other things he actually said to those gathered to see him were: 1) "Can you stand to hear any more?" and 2) "the smell of burning animals is making me physically sick!" (there was barbecue stands next to the stage). When his last song was over the lights went out and boom he was gone - such an immediate contrast in every way to the lovely, gracious, talented, engaged, brilliant, sensitive, poetic LC we all know and love. Then came the headliner: Paul McCartney who was fine I guess but still just not as good as Leonard (not nearly). We left about half way through his set. And when it was all over and we walked to the parking lot a mile away - I turned to my partner and said "Okay, I finally accept it: we're OLD!"
Jazz
Top

And acceptance is grace

Well, it's about thyme, Jazz

. Alright, on several worthwhile missions and much pleasure created a much-quandaried delay, but here you are and I thoroughly enjoyed your mish-mash of a review

. Geez-oh-Pete... it looks like Morrissey came perilously close to getting ticketed for verbal pollution. Leonard simply out-classes them all. Oh, the grace... and the beauty.

I'm sorry that someone couldn't have hoisted you like Alexandra and the sails of the Ship of State... to see our beloved. But you sure had a premier attitude about it all

Thanks for weighing in and it's so wonderful to see you. I'm sorry you had to miss Nokia. Might you be trying to get to another somewhere along the line? It's just so worth it, Jazz.

I got to see LC and Mccartney play in the same night..i will never forget it...
seeing all the young faces completely in tune w LC was pure magic..
Bird on the wire brought a tear to my eye.
many young females cried during his set which was very touching..
Top

mnkyface wrote:Was just watching a "new" clip from Coachella that was just put on YouTube, I'm Your Man.
http://www.youtube.com/watch?v=h9aW78JqPBc
Seems like there is A LOT of sound leeching from another stage, especially during the last couple of minutes. Leonard even says something to Roscoe Beck immediately after the song (before even bowing) and he seems perturbed. Is this the infamous Franz Ferdinand set on the adjacent stage? If so, how annoying!

Wow! I just watched this - and that extraneous noise is terrible! Actually, in light of the fact that it was Leonard Cohen performing, I would say it was a sacrilege!

Now I understand the Sharon Robinson interview better - the mentions of the Cochella concert.


I saw the show twice back in April – once at the Nokia Theatre [in Los Angeles] and then a week later at the Coachella Festival [near Palm Springs]. The sense of reverence in the L.A. audience was palpable, whereas the Coachella crowd had more of a sense of discovery. Did you feel that?

Right. They don’t realize that a lot of Leonard’s work has become part of the cultural mainstream. But Coachella was a really … interesting show. It was great to be there, and great to be playing for that particular audience. It was actually kind of a weird show for us, but it was very well received, so that was nice.

You sound less than completely convinced. Were there problems?

Well, our show is not necessarily a festival show. [Cohen had to pare down his three-hour set list to fit Coachella’s 55-minute time limit, and his crew struggled to replicate a sound design usually so pristine that – as I noted in my review of the L.A. show – Cohen thanks engineer Mark Vreeken on a nightly basis.] We did a sound check the day before, but it didn’t make much difference because there were several acts before us, and what we heard back through the monitors at the start of the set was definitely not what we were expecting. We were OK once we got used to what we had to work with.

Anyway - it sounds like it was a great show in spite of the difficult and less than ideal circumstances - and any chance to see Leonard Cohen in a live performance is a blessing!

I love the pleading hand gesture from Roscoe Beck in the this video - at about 4:35 - after Leonard sings "I'd tear at your sheet, I’d say PLEASE …"

what we heard back through the monitors at the start of the set was definitely not what we were expecting. We were OK once we got used to what we had to work with.

Interesting too because this is one of the few concerts in which Leonard drops a line.
@3:55 here: http://www.youtube.com/watch?v=EHmcOIwDD_s

I swear he says "jeez" when he realizes what is happening to him. I think it's totally adorable the way he is looking at the girls, and they get him back on track. I actually love these little moments (I'm sure he doesn't!

I love the big smile that breaks out on Dino's face when the audience starts cheering for Leonard as he kneels before Javier and first starts to sing (at about 2:00).

Return to “The North American Tour 2009”