Gigs confirmed in Cologne on July 1 and Berlin on July 2:

Marianne Faithfull will also perform on July 2 in Berlin - what a coincidence (as even "long time friend" of Leonard): 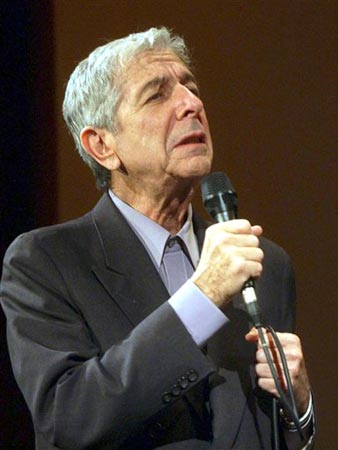 That would mean no break between the North Amwerican and the European tours? Crazy.
Top

That's what I also thought

I even saw Cohen last summer for my very first time in Lörrach, Germany. That was July 25. I even met him shortly (ok, not really "met", just said "hello" and shaked his hand

giving him a sunflower) after the soundcheck on the Lörrach market's place.

Then I saw him again in October in Zurich.

Really hope he also will do a gig (or even more) in Switzerland again! Do you think so?
Top

Great, great, great! I see you are even from Berlin!

Did you know about this thanks to my post or from your own way? (curious me

And I guess you were also in Lörrach as you mention 4 gigs last year. Right? And also in Zurich?
Top

What a nice surprise! I have my ticket too!
Yeah!
Top

Yes no need for travelling this time

Thanks a lot for posting this great news, the info just came in this minute via advertising from eventin. This would have been too late to get 3rd row tickets. I guess everyone will be running for them by now. When I bought mine there were still 1rst row tickets available, but at the sides of the stage, I think centre will be better. This is just perfect.

No, I have neither been to Lörrach nor to Zurich. I saw him in Amsterday, Berlin, Hamburg and London at the RAH.
Are you from Germany and will you go to any of the two shows?
1990s Berlin 2008:Amsterdam-Berlin-Hamburg-London RAH 2009:Berlin-Barcelona 2010:Odense-Berlin-Gent x3 -Wiesbaden-Marseille-Hannover-Las Vegas x2 2012:Gent x5 -Amsterdam x2 -Berlin-London-Verona-Toulon-Paris x2 -Barcelona 2013:Paris-Antwerp-Mannheim-Brussels-Rome-Lucca-Berlin-Lodz-Prague-Vienna-Pula-Odense-Zurich-Manchester-Leeds-London-Rotterdam
Top

I will see you there basecamp

I'll be in Berlin.

As I will be in Berlin anyway that day we should really meet (and I get an ice cream for this news - LOL). Joke, no, really...we should meet!

Marianne Faithfull isn't bad neither! Is the Citadelle a nice Festival? As being a hardcore Marianne Faithfull fan you comprehend me not going to HIS concert BUT I will see him again, that's for sure. THIS YEAR!!!

I really wanted to post this great news IMMEDIATELY HERE!!! as I wanted his real fans to get the best places! Happy then?

Ah you are also having the alert mail? Me, I received it 1 hour ago already, that's strange...they are obviously not been sent on same time, but I also know this from other newsletter registrations: some people get it in the morning, others in the afternoon...that's what I got so far. Does it depend which letter you name or family name begins or where you live or...?

Pretty happy to have informed you in order you get good places!!!

And yes, sure! Folks running to get tickets now...and you have it. GREAT!!!

BTW - ever seen these youtubes from the Lörrach gig - even from the soundcheck at about 4 p.m.?

many greetings from Basel

PS. I was in Munich on Tuesday to see Marc Almond (awesome!) and will be again in Munich on April 4 for Bob Dylan. Not travelling that much to Germany for concerts but for artists than do not perform in Switzerland (such as Marc Almond on this tour) or artists I am pretty much in such as Marianne and David Bowie (hopefully with a comeback soon!). Ok Dylan will come to Basel as well but I HATE SITTING PLACES!!! That's why I will go to Munich!
Last edited by faithfully on Thu Mar 12, 2009 5:39 pm, edited 1 time in total.
Top

Well, I just checked my mails, saw that newsletter from eventim and believe it or not, at first I openend the forum to see, if it's already been posted here instead of openening the eventim site right away! I guess just that selfless (and stupid) reaction was responsible for my luck

Edit: So we could already see each other at the Dylan concert in Munich

And I missed the soundcheck in Lörrach... train delay...

Is this definitely legit? Jarkko??

I wonder why http://www.leonardcohenfiles.com does not mention these dates!

It's eventim, I trust them.
Top

The schedule for summer 2009 has not been confirmed, and is not yet official - however Eventim was the first one to start also last year (although the first Berlin date didn't happen), so we have no reason to doubt this. I don't post any schedule on The Files before confirmation from the tour management.
1988, 1993: Helsinki||2008: Manchester|Oslo|London O2|Berlin|Helsinki|London RAH|| 2009: New York Beacon|Berlin|Venice|Barcelona|Las Vegas|San José||2010: Salzburg|Helsinki|Gent|Bratislava|Las Vegas|| 2012: Gent|Helsinki|Verona|| 2013: New York|Pula|Oslo|||
Top
Post Reply
182 posts