Dominique and I've found another unauthorized album listed by Amazon UK and Amazon France:
"Once More for Marianne", to be released on October 14.

2 CD set with 25 songs recorded at the Montreux Casino on June 25, 1976, including the song "Do I Have To Dance All Night" which was released only on vinyl single in France and The Netherlands.

This must be another unauthorized bootleg, recorded from the radio broadcast. Pretty shameless use of Marianne’s death in the title.
I'm trying to find more information.

SUPERB 1976 PERFORMANCE FROM COHEN WHILE ON HIS NEW SKINS TOUR This magisterial concert by the inimitable Canadian singer-songwriter and poet, Leonard Cohen, was broadcast live from Montreux, Switzerland, towards the end of his 55-date European tour of 1976. By this stage in his career, the 41-year old Cohen had released four studio albums, debuting with the outstanding Songs Of Leonard Cohen for CBS Records in 1967. Six of that superb record s best songs are presented this evening: Hey, That s No Way to Say Goodbye, One Of Us Cannot Be Wrong, Sisters Of Mercy, The Stranger Song and So Long, Marianne. The latter, in particular, is a spell-binding performance, a gorgeous homage to Cohen s lover and muse Marianne Ihlen (1935-2016), and a song which many fans consider was given its most entrancing performance at this very show. Cohen s 1969 sophomore album, the stark Songs From A Room , supplies seven songs to the set, including the classic and probably best known cut from the entire Cohen canon, Bird On The Wire, which is also given the singular honour of being performed twice, and is accompanied by You Know Who I Am, The Partisan (Cohen s moving adaptation of the wartime French resistance anthem Le Chant Des Partisans), the bleak Story Of Isaac, The Butcher, Lady Midnight and Tonight Will Be Fine. The similarly uncompromising 1971 album Songs of Love and Hate contributes the lively Diamonds in the Mine, and Famous Blue Raincoat (later adapted by another of Cohen s ex-backing singers, Jennifer Warnes, on her own 1987 album of Cohen covers Famous Blue Raincoat ). Oddly in a unique moment, the haunting Joan Of Arc (the penultimate performance of the evening) is abruptly abandoned by Cohen who calls a halt just as it s reaching its conclusion. Half-a-dozen further songs promote Leonard s then most recent album, the comparatively lush New Skin for the Old Ceremony . Undoubted highlights are his paean to a lover from the past, Janice Joplin, on Chelsea Hotel #2, the chilling roll-call of Who By Fire, I Tried to Leave You, Lover, Lover, Lover and the plaintive Is This What You Wanted. There are two songs performed too which do not originate on studio albums; the rare Do I have To Dance All Night was only otherwise issued as a 45rpm single in Europe, in a live version recorded earlier on this same tour in Paris. Finally there is Store Room, a 1967 song that remained resolutely non-album until being added as a bonus to the 2007 reissue of his debut.

Dominique found also the cover of this release: 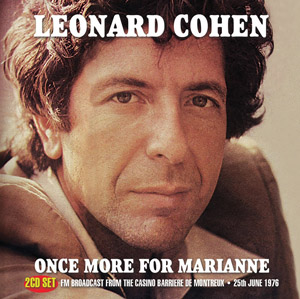