Quite frankly, this Chelsea song took me by surprise. For one thing I did not know that it was all about Janis Joplin and Leonard fooling around on an unmade bed at the hotel.

I was enlightened only here.

So what do we actually have about Janis and Leonard?

C'mon. Spill the bean here in this thread.

I remember now from an interview in an excellent documentary called "The Song of Leonard Cohen" by Harry Rasky - thanks once again, Margaret, for sending it to me! - that Leonard was asked about the meaning of the line "I don't mean to suggest that I loved you the best" - whether that was the general way he felt about all the wonderful women he had had a relationship with so far. Leonard replied that no, it wasn't, he had just intended to indicate in a way that he knew Janis, that hey had met from time to time, but that he didn't want to make it look from hindsight that he had been part of her "inner" circle or a very close friend, and that that was all he wanted to indicate... Hope this is an accurate paraphrase!
"You thought that it could never happen / to all the people that you became"...
Love Calls You By Your Name
Top

And does that mean that he had sex with her?

It's like .... having sex with a woman and then bragging that to his buddies openly. I would think that it was only a simple, imaginary composition of poetry, like my "arching my back" poetry.

I think the song tells you all you need to know about Leonard and Janis Joplin's liason, and I would imagine it's all true. I believe that I first heard Leonard reveal that the song was about Janis, at his July 1976 concerts in London. I remember my own initial surprise when I heard that the song was about her. In later concerts, Leonard said that he felt he had been indiscreet, and if there was any way to apologise to a ghost, then he would like to do so.

In his preamble to the song, he mythologizes their meeting. From memory , he says words to the effect of: "I used to ride the elevators in that hotel all night long". Then, when he meets Janis (again from memory) he says to her "are you looking for someone?" She replies "I'm looking for Kris Kristofferson". Leonard then says "little lady - you're in luck... I am Kristofferson!". He goes on to say "...I was looking for Brigitte Bardot". I take these sayings as metaphorical, but true in the sense that neither were each other's ideal. Leonard then says "but through a process of elimination we fell into each other's arms, Those were generous times" (which I would imagine is entirely true).

I don't think much else has ever been said about Leonard and Janis, and I suspect they may have only had a few brief encounters in the Chelsea Hotel. Personally, I'm glad that Leonard confessed the song was about her. It brings to life the meeting of two people we may never have suspected knew each other, and it also reveals something about their fantasies and insecurities, which make both of them become more real in the mind of the listener.

In 1970 I was such a fan of Janis' (who I saw in concert three times) that my Mother actually called me the day she died to make sure I was okay and offer her condolences - so we've hit a nerve here albeit an old one. I believe Leonard wrote the song as a tribute to Janis Joplin. And he was not alone. He was aware of these two - also from premiere singer/songwriters who were likewise her friends:

EPITAPH: BLACK AND BLUE
By Kris Krostofferson
On "The Silver Tongue Devil and I"
Her close friends have gathered.
Lord, ain't it a shame
Grieving together
Sharing the blame.
But when she was dying
Lord, we let her down.
There's no use cryin'
It can't help her now.
The party's all over
Drink up and go home.
It's too late to love her
And leave her alone.
Just say she was someone
Lord, so far from home
Whose life was so lonesome
She died all alone
Who dreamed pretty dreams
That never came true
Lord, why was she born
So black and blue?
Oh, why was she born
So black and blue?
As a matter of fact, Kristofferson (according to an interview he once gave) was at Baez' house in Monterey, CA visiting when they received the news of Joplin's demise. In the good (and not so good) old days of "sex, drugs, and rock and roll" I believe all of the above were involved...
Jazz
Top

I was touched reading both of your postings, John and Jazz [coming to it, upon seeing your name, Jazz].

In the Quiet Morning was written by Joan's sister, Mimi Farina....it originally appeared on "Take Heart", a 1971 album by Mimi and her partner at the time, Tom Jans....Joan's version is on "Come From the Shadows" - released in '72, this album also includes her version of "The Partisan"....it's not unusual for Joan to be credited for songs she has done - Phil Ochs sometimes referred to There But For Fortune as a song he picked up from Joan....
Top

Thanks for the update/correction, Eskimo - I knew of Mimi Farina and was a fan of her first husband's book: "Been Down So Long It Looks Like Up To Me" (by Richard Farina & Thomas Pynchon) - BTW Brice Marden (American master minimalist artist) who owns four houses on Hydra and is friendly with LC, did the lighting for Monterey Pop Festival back in the day - and was married to Joan's older sister with whom he has a son. He also was involved once with Joplin. It was his house we stayed at last Fall on Hydra... such a small circle, no?
Jazz
Top

I know this seems like a disconnect with what John E. posted, but deep down in the vague recesses of a senior memory, I recall a playbill with pictures of Janis and Leonard for a date together in NYC in that era Not sure where I saw it. 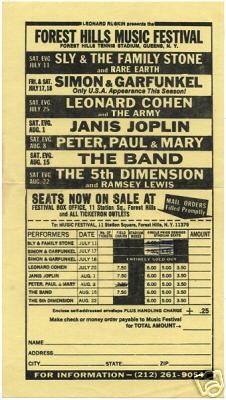 You may well be right about pictures of Leonard and Janis on a date in NYC. My post was pure speculation, based on the fact that I've never read anything about them as an item apart from the casual affair at the Chelsea Hotel. The lives of the emerging Sixties greats were obviously extremely hectic and often drug-fuelled during the peak of the "free-love" years (circa 1966-7). I can't imagine that many artists had time for anything except the briefest of flings with their contemporaries - including Leonard. We know that during this period he was also separating from Marianne, became infatuated with Nico and was moving towards his relationships with Joni Mitchell and Suzanne Elrod.

All the best, John E
Top

Thanks for redeeming my memory!

It's long and it repeats itself, but it tells the whole story, basically. The Wiesbaden speech is priceless (doesn't say much about the song, though).
Top

Something puzzling. We read on the Forum that Leonard's room at the Chelsea Hotel was 234, yet he says he lived on the ground floor......probably the same but a curious numbering system.

I am very struck by the fact that he rode the elevator as a way of meeting people----(living as he did on the ground floor) Riding for several nights before he had the courage to connect with Janis There is such a level of darkness/desparation here, and yet Leonard never makes that reference. I guess songs, not interviews are the way of describing these feelings of lonliness

Birdsong, by the Grateful Dead, is also about Janis.
Top
Post Reply
31 posts