What a delightful surprise: I was recently informed about this little tribute concert happening at a winery on the outskirts of Melbourne shortly, as per link below.

The icing on the cake is that it is being performed by a couple of local Greek musicians.

Sadly, I won't be able to attend, as I will be at the other end of the country, in Cairns.

Hey Andrew, You don't have to miss out completely

Here's a link and some videos from the show -

I know some of this is already on the forum but it's still an interesting link about Aussies George Johnston and Charmian Clift and their relationship to Leonard on Hydra:
http://www.leonardcohenonhydra.com/hydra-story.htm

and as an aside.....I studied George's "My Brother Jack" at high school. I remember now that Leonard suggested the title for that book.
It doesn't have to be perfect, it just has to B4real ~ me
Attitude is a self-fulfilling prophecy ~ me ...... The magic of art is the truth of its lies ~ me ...... Only left-handers are in their right mind!
Top

Thanks Bev... I had already viewed some of the that winery performance, but the Hydra (Johnston/Clift) article has some fresh information in it and it was great to view that film excerpt!

By the way, I'm sure at one time in Queensland 'My Brother Jack' was banned in schools (perhaps in the Bjelke or an earlier conservative era)?

My pleasure Andrew, glad you liked it!

I thought I’d add this Promotional video from the night:
http://www.youtube.com/watch?v=V8AgUXwWCVA

While they were singing the excerpt from So Long Marianne it made me “larf” to hear the word “laugh” pronounced as “larf” by two Aussie Greek boys!


Andrew (Darby) wrote:By the way, I'm sure at one time in Queensland 'My Brother Jack' was banned in schools (perhaps in the Bjelke or an earlier conservative era)?

Andrew, now that made me think! You are right, I remember the controversy about the book after it was first published. I studied it years later when completing my final year after leaving high school earlier.
It doesn't have to be perfect, it just has to B4real ~ me
Attitude is a self-fulfilling prophecy ~ me ...... The magic of art is the truth of its lies ~ me ...... Only left-handers are in their right mind!
Top

I have no idea why, but this site, http://www.leonardcohenonhydra.com, is blocked here in Russia.
Not just unavailable, but blocked, prohibited.
Roman aka Hermitage Prisoner
Top

That's really weird Roman, there's nothing covert or undesirable in the link

The following photos and info are everything which is included in that link:

EDIT: All the direct image links to the photos appear to be unstable so I've replaced them with uploaded attachment versions.

Through stories and songs this show tells of Leonard Cohen's arrival on the Greek island of Hydra in 1960. It tells of his life with Marianne and friendship with the charismatic Australian writers George Johnston and Charmian Clift who also lived on Hydra.
It was on Hydra that Leonard Cohen gave his first ever concert and then towards the end of the 60s emerged as a singer/songwriter.

'Who By Fire' (link provided above)

Two photos of the audience - 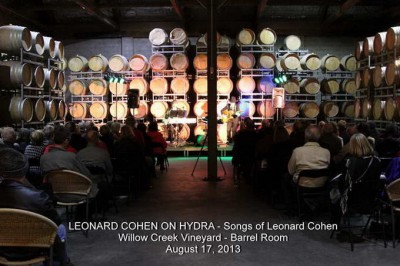 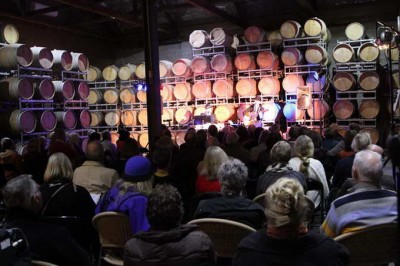 There were some local and overseas links which are posted here below just as a list.
All should be accessible by copying straight into your browser without adding all those links. But if you have problems, let me know.

Areti Ketime
It doesn't have to be perfect, it just has to B4real ~ me
Attitude is a self-fulfilling prophecy ~ me ...... The magic of art is the truth of its lies ~ me ...... Only left-handers are in their right mind!
Top

There will be another performance of this show on the 13th of April at Amici Trattoria in Camberwell.(Melbourne)
http://www.leonardcohenonhydra.com.au/n ... n-13-april
Top

Thanks for the heads-up on this, Murray

- I'll have to consider this one, I reckon.

P.S. It's a shame the venue isn't a Greek restaurant!

I’m not long home from this re-run tribute concert featuring two very talented local Greek performers, Chris Fatouros on guitar and vocals, along with Spiros Falieros on keyboards and vocals.

This was such a nice little concert that lasted just over an hour and a half and which was attended by say 50 plus people. Chris is a well presented, confident and enthusiastic young man, with a very pleasant voice, very clear diction, and who is an adept guitarist to boot. Spiros, who is a bit older than Chris, was perhaps eclipsed to some degree by his younger partner, in terms of performance focus, but nevertheless did some enjoyable keyboard work, as well as the more subdued back-up vocals. Notwithstanding this, they worked very well together and complemented each other admirably in the more important respects.

Most of the songs were preceded by a pithy little intro by Chris, of a biographical nature about Leonard and relating to the particular song about to be performed. (I think he had read Sylvie Simmons biography

). As might be expected, there was also a strong connection made by Chris about the significant friendship Leonard had with the Aussie writing couple, George Johnston and Charmian Clift, who took him under their wing when he was the “new boy on the block” on Hydra.

Overall, this was a most enjoyable evening, not forgetting that it was a bonus to catch up with a small group of folk who had last met up at the local Leonard concerts here this past November/December, namely: Tracey (blonde madonna) and her husband Jim; Jenny and her friend Janet.

Following the show, the five of us then dined together at another Italian eatery down the road. So to sum up, I really enjoyed this fairly low-key “feel good” event and I believe a fine time was had by all.

Wow! Thanks for such a glowing review.
We had a great time too and it was awesome to have such a lovely audience in attendance

After such a successful night, the current idea is to run the show at Amici again very soon.
I'll be sure to keep you posted when the plans become more concrete.

I'm looking forward to speaking with you again soon.

Hi Chris, thanks for that comment - I didn't expect you to pop up here, but welcome to the Forum!

I will look out for more information from you about your show. Moreover, I may even suggest to you, or facilitate, another performance by you at some point, but with perhaps a Greek restaurant in mind and/or a venue where a few photos of Hydra and Leonard (of which I have several) could be featured on the walls.

Well you can thank the power of Google Analytics for me popping up here, when we were promoting this show just passed, I was monitoring where the traffic to the website had been coming from and there were quite a few people coming via the link in a previous post in this topic.

We are looking for a bigger venue for performances soon to come, though the venue must meet a few requirements, if you have any specific ideas I would love to hear them.

We did initially have the thought of having a multimedia component to the show incorporating photos of leonard on hydra. We looked into using some of the photos from the life magazine shoot but the cost of licensing was extremely prohibitive. It is possible that we may have access to some other photos and this may become a component of the show down the track. I would be interested to see what photos you have.

I noticed that the site admin is from Espoo in Finland, I have been there a number times now as that is where my wife comes from. So if you ever have a gathering in Finland, chances are that I could make it there.
I have been to Hydra once several years ago, but only for a few hours on a day cruise, so I didn't get to see too much. I did however make some time to walk around the corner and go for a swim. Recently when looking through the life magazine photos of Leonard on Hydra I saw a photo of Leonard swimming in exactly the same spot.

Talk with you again soon.