I thought I had posted the banter in this song earlier, but it has disappeared!

Start: "Thanks a lot friends. Take your time getting to your place, there's no hurry. We have no place to go and I'm so happy you stayed.
I'm going to fire up this little old machine here. It actually qualifies as an antique, it's 50 years old. It has a warm sound, it may remind you of a gentler time. It won't rise to the sophistication of your digital experience, but it does the trick."
After keyboard solo: "I know that's just an act of compassion. Just 'cause I got all the notes right, you're ready to express this gesture of kindness to the elderly. I appreciate it friends."
End: "Don't stop, please. Just a few more Do Do Dum Dums. Because when you stop I'll be plunged back into a confrontation with the audience, with all that abundant opportunity for humiliation. Just 2 or 3 more. Thank you so much dear friends."

Thank you Dean for your reply to my post. Very reassuring.
Top

I had four hours sleep last night and now I’m finally home with at last some time to put pen to paper, so to speak.

I didn’t want to write this report. To do so is an acknowledgement that this was my final LC concert. I know no one can see into the future, but for me personally I feel that it was THE final concert. To quote someone, “It’s over, it ain’t going any further.”

But a wonderful by-product of going to so many concerts all over Australia has been the great people I have met in doing so. To put it simply, LC friends are like no other in the world. Kind, generous, thoughtful and a joy to know, no matter what your nationality.

I decided at the beginning of this concert that I wouldn’t take any photos. I wanted to just absorb this last opportunity without any distraction. As has already been stated we all held up AlanM’s LC vinyl record covers. But before the show started I was talking to one of the camera crew who I knew previously about what we were going to do. He said he would video us holding up the albums but we would have to do it after each set and encore for it to be shown on the big screen. He is one of the official cameramen filming the LC Australian Tour concerts (but not in NZ). He also stated that both he and his colleagues were invited up on stage with the rest of the UHTC at the end of the concert. I replied that seeing he was doing a favour for me I would return the kindness and take a photo of him on stage. When the time came my camera wouldn’t work so I asked the person sitting next to me to take some photos of him for me. Thank you for doing so! She is sending them to AlanM and he is forwarding them to me to send on to him. It will be interesting for him to see himself on stage and from the other side of the camera!

The other things I normally report on have already been stated so I won’t repeat them. Thanks Alan for your great videos/words/photos (even if I did take one of them

A few more personal highlights for me. Return acknowledgements from Alex, Mitch and Javier who were in direct view of my front row seat.

One last thing - I wish all those attending the NZ shows as much enjoyment as I have had over the last month. And I suppose a nice way of looking at it all is that the end is just the beginning!
It doesn't have to be perfect, it just has to B4real ~ me
Attitude is a self-fulfilling prophecy ~ me ...... The magic of art is the truth of its lies ~ me ...... Only left-handers are in their right mind!
Top

Bev,I just wanted to let you know how much I enjoyed following your fantastic Leonard Cohen Australian tour adventure.
I probably followed this last leg of the tour more closely than I have lately because of the wonderful and joyous reports you have posted. The accounts of each individual show and the photos almost (almost) made me feel like I was there too. I am glad you had such a great time. Hopefully this journey has made flying for you a bit more tolerable and maybe we will see you at one of the future events.

AlanM wrote:
Going Home seems to be in a log jam at the moment. If it doesn't finish, I'll delete it and reload.

It's working perfectly now. And it's fabulous! Thank you so much for that, Alan, & for all your gorgeous videos, photos, & reports!!

Thank you also to everyone who posted & kept us in touch with the Australian tour - due to all of your generous efforts, it has been a joy to behold, & allowed me to feel much closer, albeit from the other side of the world.

Bev: congratulations on your Great Journey!! I'm so glad you made it to so many concerts, met up with so many friends, & had such a wonderful time. And thank you for your very dedicated mixed-media reporting on each & every Great Event. We all know that bittersweet intensity of emotion when the potential "last" one comes around. I don't think one can possibly deny the sadness associated with that possibility, & I like what you wrote about the end being a beginning; sometimes I try to deal with it by contemplating the idea that time doesn't really exist they way we perceive it, & everything is really happening all at once in one eternal now, & therefore, we can revisit any given event at any "time" - but that doesn't always work. . . so I hereby raise a glass to endless fountains of eternal beginnings!
Top

Bev, Alan, Dean you are great! Thank you for all your photos, reports and all the emotions that are almost very personal. And this is the most beautiful and precious. You are our awesome connectors with a good, joyful and reflective world. World of Leonard... whom we miss, even if we are still at the stage during a concert. Someone already wrote here that BY DINT OF YOU, Dear, we can be present there. It is the honest truth!

Bev said an end of the route was only a beginning. And this way let stay.
Start of beauty, nobility and love. In and around us. It are my wishes for everyone, which together with LC - man of genius - are creating the world.

Marsha, Rachel and Beata,
I am so very pleased you all came along with me on my wonderful adventure! Thanks so much for your kind words! Because I truly appreciated those of you “up above” who had posted reports, photos, videos, etc from the tours in Europe and Nth America, I wanted to give back something to everyone about the “down under” tour. I hope in my way I have.

On my odyssey I have been on 14 different air flights and I will say that my fear of flying is still there but I’m learning to deal with it.

You know, Einstein believed that there is no true division between past and future, there is rather a single existence. If that is in fact true then maybe our endings are truly our potential beginnings!

And thanks to J who sat next to me and Alan who passed them on to me, here are some photos of the band and crew on stage.
The last moments of the Australian tour -

I combined two photos into a complete panorama 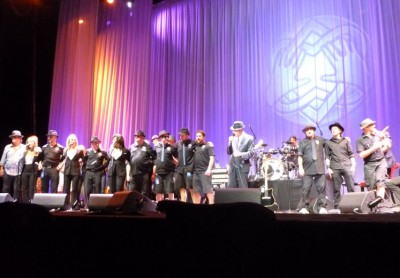 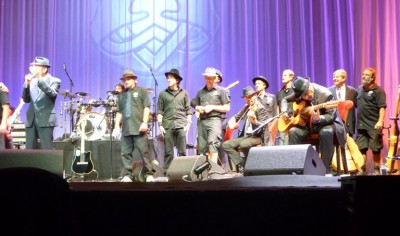 The crowd at the Adelaide Ent Centre gave LC a dazzling reception.
He held the audience in the palm of his hand.
To all who missed this humble genius-our hearts bleed for you!
"My arms open wide" he says...and ours for you-"Our Man".
Kindest regards -Yvonne, Jim & Lee-Ann:
Top 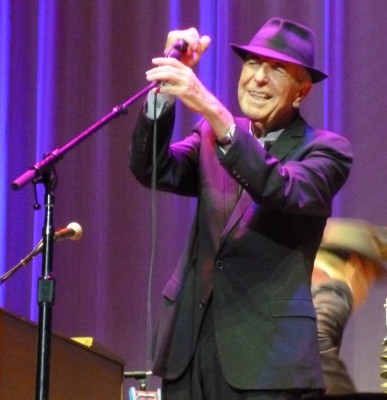 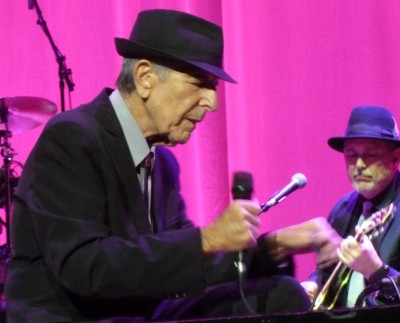 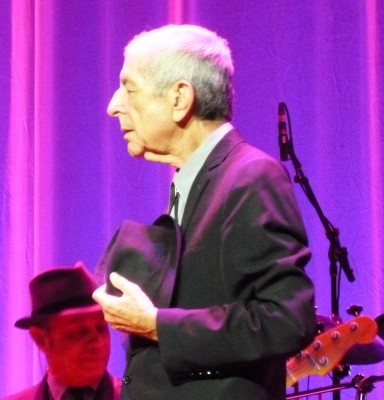 More photos of the Adelaide concert taken by my friend Julie who was also in the front row. 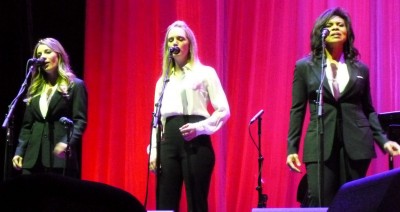 Some more from Julie. 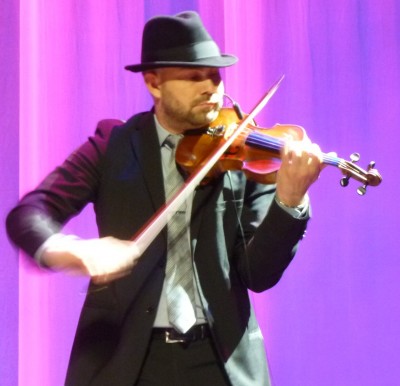 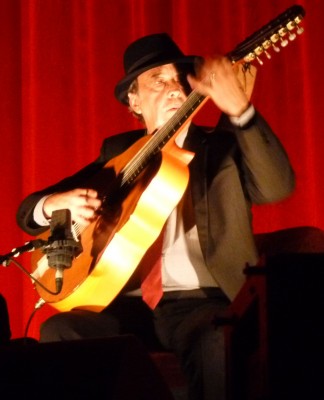 Javier "Who By Fire" 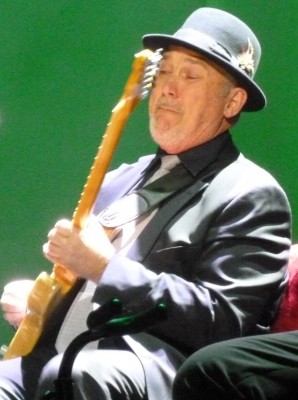 That's all from Julie, folks.

Dance Me To The End Of Love
https://www.youtube.com/watch?v=eEhpQNmuuyk
Top 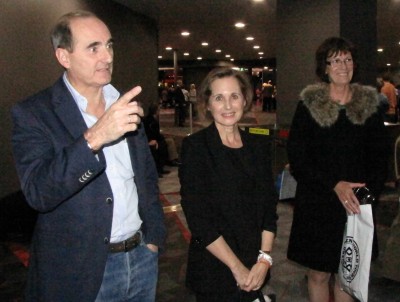 Just found this photo of our new friends from France, at the Adelaide Entertainment Centre.