The venue is Adelaide Entertainment Center (AEC), an indoor arena used for sporting and entertainment events.
It opened in July 1991.
The dome-like structure, “The Orb,” is illuminated with different colourings and patterns using LED lighting.
Maximum capacity is 12,000.
Website - http://www.theaec.net/HomeEvents.aspx

Adelaide is a coastal city and the capital city of South Australia. hannahfallowfield - Cannot even believe I am going to see this great man tonight. Even more happy I'm going with my dad who introduced me to him while I was in nappies to help put me to sleep. Leonard, we're coming for you! #leonardcohen #hallelujah
Top


@foodbling - Off to Radelaide for the day. Leonard Cohen gig tonight should be good

Old St Jonny Potts ‏@fastercamels - A lot of people think rap started in New York with Grandmaster Flash et al. but Canadian Leonard Cohen was rhyming as far back as 1974

@glasnOZt - Such choices in entertainment in Adelaide tonight. Leonard Cohen on one side of town and Bon Jovi on t'other

@fayg29 - Leonard Cohen's final Australian concert tonite in Adelaide. Saw him twice in past 5 days but wish I was there to see him and band again.

@deathinvogue - I know he's old enough to be my grandfather, but Leonard Cohen has a really sexy voice. #confused 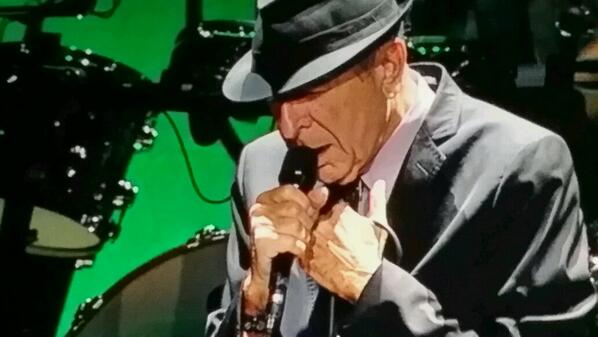 @PDarbyshire - How sublimely brilliant is Mr Leonard Cohen and THAT band of his??? Heaven! 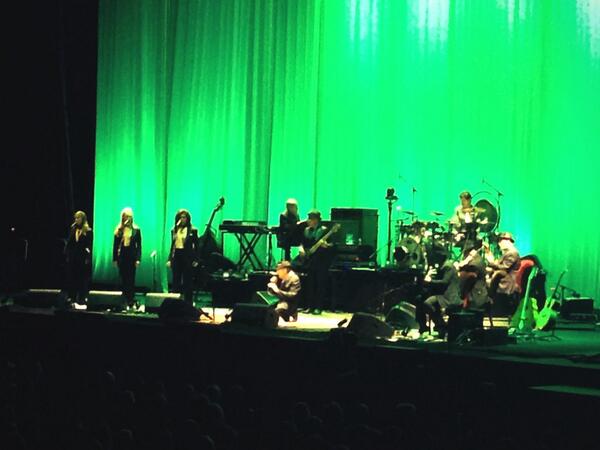 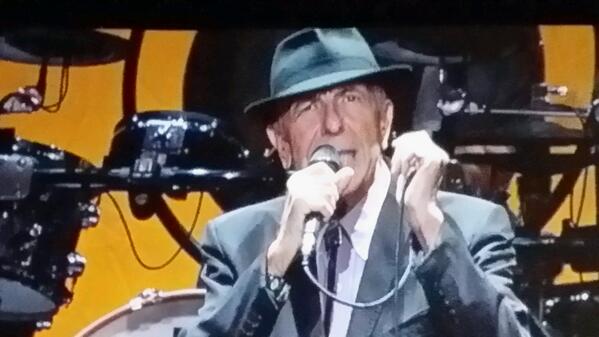 @fullbodypajamas - The only footage/photo I managed to get of Leonard Cohen tonight before my phone ran out of space! Was an amazing show. #thefuture http://instagram.com/p/hyHwfBDMbv/#

‏@fullbodypajamas - Once again Leonard Cohen did about a million encores and it was a fantastic show. Love you Leonard

marcusadelaide - LeonardCohen kneeling at the power of his own lyrics. #music #realmusic #gig #concert #livemusic #Adelaide

Just back from a great show at the Adelaide Entertainment Centre. Same set list as the other Aus tour show I caught (Sydney Opera House).

In a nice touch, Leonard invited the tour crew up on stage for the last song (Save The Last Dance For Me). A hugely enthusiastic response from the Adelaide crowd was a nice way to round out the Aus tour.

There were several forum folks at the show so I expect there will be lots of great stories -- and hopefully videos -- posted here soon.

Now the tour rolls onwards to its grand finale in NZ.

One thing I noticed was missing tonight was the drum solo during Darkness, while Leonard chants. It didn't happen.
Also Rafael was introduced early in the intro to Lover, Lover, Lover. During his solo in I Tried To Leave You, he missed the drumstick after he tossed it in the air.

Our group had 6 members together in the front row, and we took the album covers of my vinyl discs, and waved them at the band and Leonard a number of times.
Others of our group said we featured on the video screens, but those involved were too busy waving to notice the screens. The general consensus is that both LC and Sharon did see them.
Oddly and surprisingly, Leonard made no mention at any stage of the audience supporting his music over the years.
Ah well, 15 seconds of fame. Hopefully someone has videoed the screens while we were displayed and will post it. 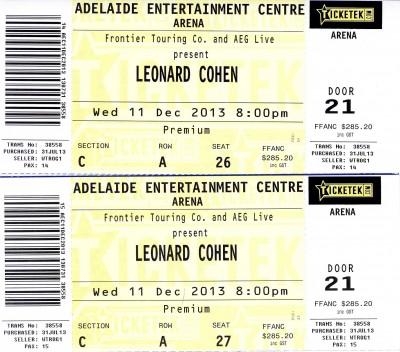 I have some videos (including "cajones" in Going Home) but I don't know when I will be able to post them. I have to rise early to get Bev to the airport in the morning.

Set 1
Dance Me To The End Of Love
The Future
Bird On The Wire
Everybody Knows
Who By Fire
Darkness
Amen
Come Healing
Lover, Lover, Lover
Anthem

I Tried To Leave You
Save The Last Dance For Me 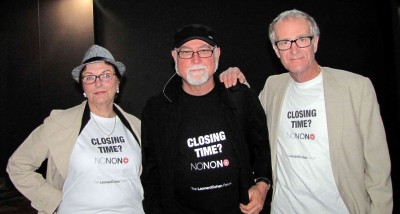 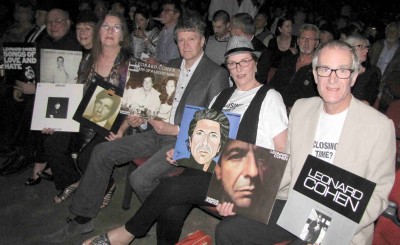 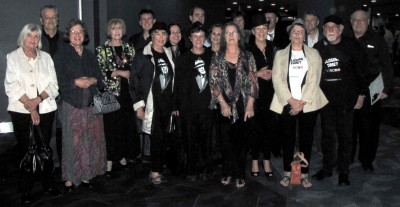 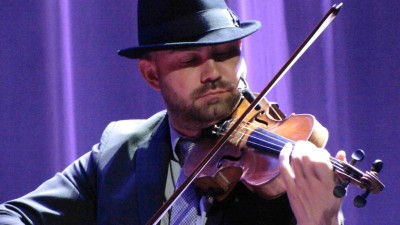 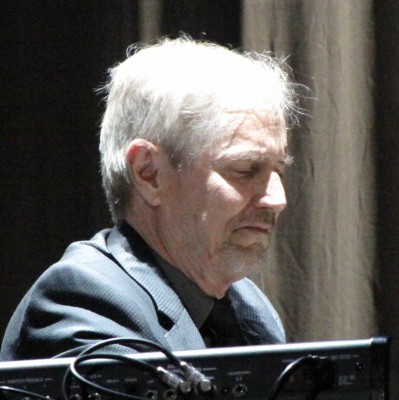 Neil controlling the Hammond B3 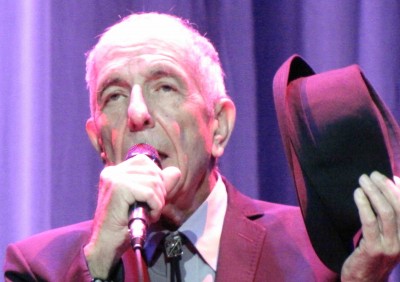 "I'll wear an old man's mask for you"

I have started to upload "Going Home" with the "cojones" reference.
It is 2:30am and I am going to bed.
Previous upload froze.
Now available at http://youtu.be/EWbpaasHMyA

I love the photos
I have been a Leonard Cohen fan for 28 years feel free to email me if you wish to keep in touch!
Top

Thank you posters for putting those of us eagerly waiting for our Cohen fix before your need for sleep. I also love the photos. BUT. My heart sank when I saw the photo of Leonard "I'll wear an old man's mask for you". Is he not well or was it just one of those unfortunate frozen moments?
Top

sereneava wrote:Thank you posters for putting those of us eagerly waiting for our Cohen fix before your need for sleep. I also love the photos. BUT. My heart sank when I saw the photo of Leonard "I'll wear an old man's mask for you". Is he not well or was it just one of those unfortunate frozen moments?

I think it's just an unfortunate mid-expression shot ... I thought generally he looked pretty spritely and energetic. Mind you, when he was talking about how long the band had been on the road he sounded really REALLY like he was looking forward to getting back home: "we're winding down our tour in Australia. We're kinda broken and we've been on the road for a long time. It's a sad story friends. We're longing pathetically for our own beds and baths. But we're damn sorry to leave this country."

Going Home seems to be in a log jam at the moment. If it doesn't finish, I'll delete it and reload.

Last night's concert at the Adelaide Entertainment Centre marked the end of Leonard's 2013 Australian tour ... and the end of the road for several folks who have been busily hopping onto and off of trains, buses and sundry other forms of transport to trek around this enormous country to follow the band's progress. For my own part it's been a short "journey" (only two concerts) but for several other forum members it has been a much larger commitment. Thankfully all of the Aussie forum travellers -- at least all that I know -- were able to make it to the show here in Adelaide, making that concert both a celebratory send-off for the UHTC and a celebration of many people's travels. In both cases it seems that the long and dusty trails have proven wearying -- Leonard commented as much on behalf of the band, and the weary sleep-deprived faces worn by some of the forum-folk by the end of last night spoke of similar.

So ... how was the Adelaide concert? In most respects I found the experience of the Adelaide concert to be very much on a par with my only other 2013 concert (the Sydney Opera House). Because I already wrote a lengthy (maybe TOO lengthy?) review of that earlier show, I won't repeat those same observations. All-in-all though, it was yet another excellent performance: Leonard and the band were all in fine form. The Adelaide audience was quiet receptive -- a little more reticent than the Opera House audience at the start, but much more vocal by the time that the encores came around.

The performance itself seemed quite similar to the show from last week -- the set list was identical and, although there were the usual variations in solos and the like, the musical element didn't really differ much at all. Given that this band has been on the road touring for so long, it's clear that they are in many ways a "well-oiled machine" which has, over time, evolved a remarkably polished and professional performance. That is most definitely a good thing ... and us Australians should feel grateful to have received such a reliable and well-honed set of songs. But, human nature being the greedy thing that it is, I can't help but wish that perhaps that we had caught the band at a point on the tour where there was a little more variation in the set-list and some more experimentation with the songs and arrangements. We fans can't truly ever be satisfied, can we?

The one big difference between the Opera House show and the one at the Adelaide Entertainment Centre was the size and sound of the venue. The Opera House -- by the standards of modern "enormo-drome" venues is a small, intimate environment with excellent acoustics and beautifully tiered stall seating. The Entertainment Centre is ... well it's just another one of those concrete boxes which doubles as a concert and sporting venue. I have always found that sound quality in those kinds of venues varies wildly depending on where you are sitting, with reflected sounds sometimes making for a muddier-than-desirable listening experience. Last night's show bore out that observation ... and only went to reinforce my appreciation for venues like the Opera House which have been architected for concert sound. That isn't to say that the Entertainment Centre was bad; the UHTC engineers did a pretty good job at still delivering a clear and listenable sound, but it was no Opera House.

Before the concert, AlanM had arranged for group of forum folks to meet up for a drink at the venue. Most of us had also gathered together for a (traditionally Aussie) barbeque at Alan's house on Tuesday night ... so most people already knew one another. There were a couple of extra folks who had flown in from Melbourne just for the concert and a delightful couple from France who had been driving around Australia taking in concerts as they went (what a holiday!). Six or seven folks all had adjacent front-row seat and as a way of giving a signature "wave" Alan had brought along a collection of covers from his Vinyl LPs which the front-row crew could wave around at Leonard and the band. This actually worked out as a very visible "stunt" ... since not only did those on stage get a good view of Alan and crew frantically waving LP covers but so too did the entire audience, thanks to the video cameramen picking them out when filming the audience reaction at the end of each and every set. Although not part of Alan's stunt, there was also another person in the front row frantically waving a placard at Leonard -- Helena, Leonard's "number 1 fan". I had completely forgotten, but I had seen Helena (another Adelaide local) on both the 2009 and 2010 tours, never far from her signature laminated sign -- a red heart, which he proudly waved above her head at the end of about half of Leonard's songs. It was great to see her at work again!

In terms of other notable happenings, I didn't see too much ... just a handful of things:
Good luck to Leonard and the UHTC as they head off to New Zealand and the final four shows of the world tour!