The day is almost upon us 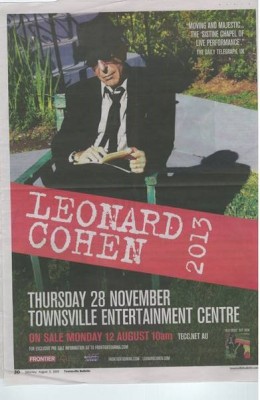 Townsville is located on the northeastern coast of Queensland, Australia – in the “dry tropics” region of Queensland.
The venue - the Townsville Entertainment and Convention Centre - is an indoor, multi-purpose sports arena, situated on Townsville’s waterfront.
In concert mode, the capacity is approximately 4,130.


@JohnDaicopoulos - Ready for Old Ideas from Leonard Cohen in Townsville tonight. A voice, poetry and music that brings me back to Montreal

@MaryWho4810 - Who will be hearing Leonard Cohen live in #Townsville tonight?

@ALPHAMAMA_says - Finally made it to Townsville yo!!! Going to see Leonard Cohen tonight. Holy shitballs!

@BatemanDan - Triple encore from #Leonard Cohen in Townsville and still going. This is why he's one of best live acts in the world.

@tabbzomaji - Tonight in Townsville I got to witness the incredible poet and songwriter Leonard Cohen, I’m inspired, he had so much charisma being in his late 70s.

@JohnDaicopoulos - Wow. Never leave a Leonard Cohen concert after the first or second encore, or the third, or fourth, maybe start to think of it after the fifth, but wait just in case. Thanks for a great night Leonard.

‏@LeightonESmith - Well I'm pleased that I was able to take one decent non-blurry photograph of the Leonard Cohen gig so enjoy that.... http://fb.me/2jjmnN50k

@JohnDaicopoulos - There are musicians, and there are artists, and then there's Leonard Cohen. Thanks for coming to Townsville. The honour was ours.

@PRCrystalClear - Leonard Cohen performing last night for 3.5 hours was amazing. What do you want to have achieved when you're 78? fb.me/1G5dflWvS

I haven't seen any Townsville Bulletin or like reviews yet, as they probably won't surface until tomorrow, but I thought in the meantime I would post some eloquent and interesting (FB excerpted) comments by my 35 year old nephew Leighton, whose twitter photo is also posted above, and who was there with my sister, Anne:


Well I'm pleased that I was able to take one decent non-blurry photograph of the Leonard Cohen﻿ gig so enjoy that. Sucked in to all the rookie Townsville punters who walked out when he said good night (for the first time) and missed out on 3 encores (30 min) worth of material. Even though this isn't the style of music I'd ordinarily gravitate towards, I have to make one thing clear from the outset: I am in awe of this man. 79 years old and still killing it. He assembled a veritable A-Team of 9 musicians to support him (sourced from around the world) who were dripping with both talent and technical skill. It was a joy to watch consummate professionals go about their business for 3 hours delivering a treasure trove of classics. I was watching all the instruments in action... accordian, harp, violin, spanish guitars, organs, keyboards, upright bass, .. even a gong... everything was deployed with enviable dexterity. Song highlights for me were concert bookend songs 'Dance me to the end of love' and 'Save the last dance for me' as well as 'Bird on a wire' and the timeless classic 'Hallelujah'. I honestly I can't say that I've seen a stage showered with roses like it was tonight. The oldies were loving it!

Today is travel day for the UHTC and me. Another aeroplane, city, and concert. If I could just get my Babylon candle to function all this travelling would be so much easier! Townsville was an enjoyable concert for a variety of reasons. The concert itself, being conveniently next door to my hotel, meeting other forum friends and so many band members and UHTC crew. Last night after the show met Sharon in the elevator. An unexpected and pleasurable encounter.

Once again, I had an absolute dead centre front seat. I’ve been really spoilt at the last 3 concerts! The stage seemed a little further back but I think lower than Cairns and the total width was smaller. The arc the band usually forms took up the whole area so no one was looking at them as one vertical line or behind them. Leonard and band received a standing ovation before they started, as has been the case in all Aussie concerts. To me the show seemed to start off slowly then gradually gained momentum. I suppose that’s how it goes with all the concerts; I just hadn’t noticed it til this one. The crowd was respectfully vocal and attentive with the occasional outburst until the encores when it all seemed to be let loose on stage and in the audience. Mind you, the woman sitting next to me was very animated all night and sometimes vocal; she was obviously having the time of her life!

I’ve finally figured out what was wrong with my camera. I suspected it could be not using a flash and it proved to be the case. When it was all happening during the encores I decided I could get away with a few shots on flash and here are a couple, actually the first one with no flash and the second one was - 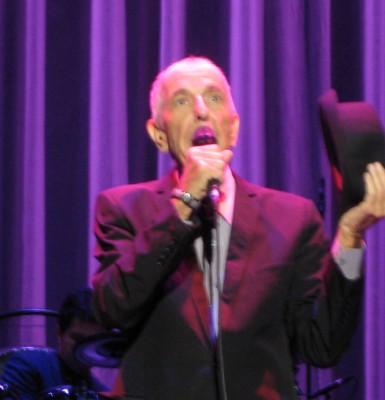 It was lovely meeting antipodean heart and her husband! She said she recognized me from my avatar on the forum. I suspect they may now be going to the Hill Winery near Geelong. At the beginning of the encores she came down to the front with a bunch of roses and very kindly gave me some to throw on the stage. The gesture by all the rose-throwers was appreciated by LC and the band, except maybe the last one I threw trying to make sure it landed near his feet. Well, I didn’t know I was that good at javelin throwing albeit a bit inaccurate – my previous one fell short! If he hadn’t taken evasive action it may have speared him near the right hip! But it was a thornless rose end first! Leonard picked one up and sung with it for a while. 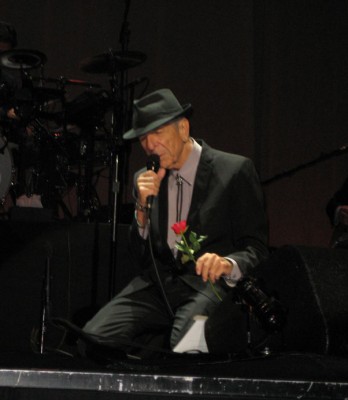 “I see you there with a rose in your (hand)”

The audience started clapping at what they thought was the end of Tower Of Song so Leonard didn’t go on with any monologue. He sang the original words to Going Home this time. We were privileged to get the complete third encore listed on the stage set list which is below. I think that’s only the 4th time I’ve Got A Little Secret has been sung anywhere. I was sure he would use the lines of “I bought a ticket for the tropics” seeing that’s where he was but instead he said, “I bought a ticket to Townsville” – definitely more appropriate in the circumstances! Unfortunately, I’ve ruined the recording with my spoken pre-emption of the original word!

On the way to the airport this morning I was talking to the taxi driver about the concert and he stated the morning paper he had showed a piece on it. He said I could tear it out literally and I did! Here’s the review –

"a piece that was torn from the morning (paper)" 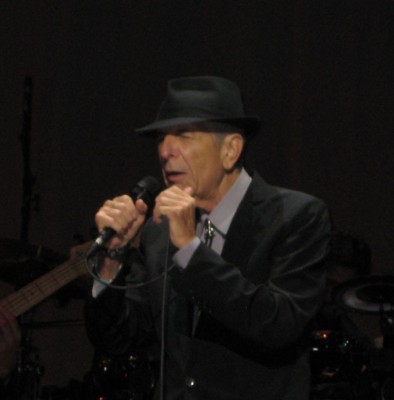 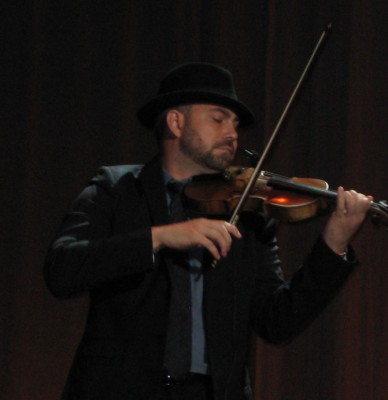 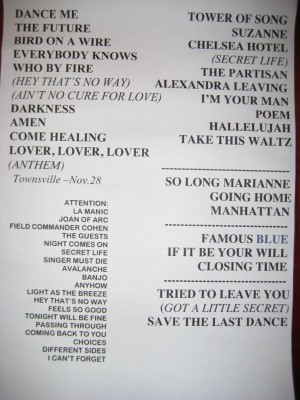 Now, I need some food and sleep to be functioning for tomorrow night in Brisbane.
It doesn't have to be perfect, it just has to B4real ~ me
Attitude is a self-fulfilling prophecy ~ me ...... The magic of art is the truth of its lies ~ me ...... Only left-handers are in their right mind!
Top

Dear Bev, your stories are colorful and interesting. Distinguished by the fact that there is in them much of your emotions and experiences. I read all, with each city where you were. For me here is so much new words from Leonard . I'm grateful for it. Thank you for all reports.

Thank you Beata,
Glad you are enjoying my adventure with me. I had a wonderful time in Townsville 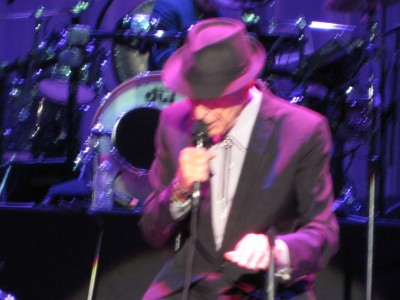 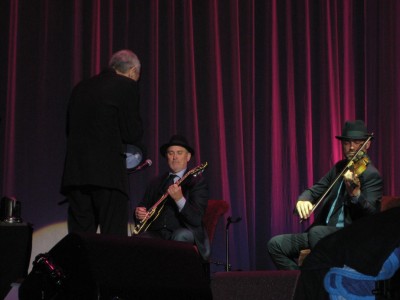 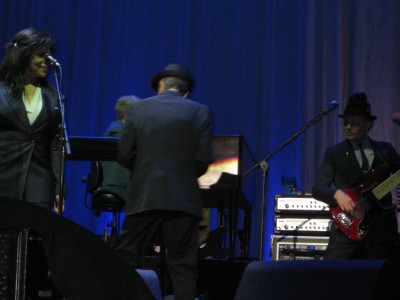