Hello Down Under. It looks like the rain and electrical storms ended and the skies cleared in time for the show!

The venue - an outdoor amphitheatre located at Bimbadgen Winery, Hunter Valley, in New South Wales
The event is called “A Day On The Green” - a series of outdoor summer concerts held in major wine-growing regions around Australia and New Zealand. An artist who requires no introduction, Leonard Cohen is arguably the greatest singer songwriter of modern times. Leonard Cohen's five a day on the green concerts in 2009 are still fondly remembered as amongst the greatest they have ever staged, and his 2010 performance at the iconic and beautiful Hanging Rock earned him the Helpmann Award for Best International Contemporary Concert and overwhelming acclaim.

Leonard Cohen returns to the spectacular surrounds of Bimbadgen Winery in the Hunter Valley this November.

A Day On The Green is known for the good food, great wine and fantastic concerts with music you love. A day out with friends or a weekend away from home.

Don't miss your chance to miss the living legend perform at Bimbadgen Winery this November.

@Sherbam - @Bimbadgen what's the verdict on Leonard Cohen with this electrical storm? Will the show go ahead?

@ADayOnTheGreen - Leonard Cohen Bimbadgen Winery is going ahead. Conditions on site are wet but safe. The venue itself has missed the worst of the storm activity in the area this morning. Please come prepared with appropriate footwear and good quality rain coats. 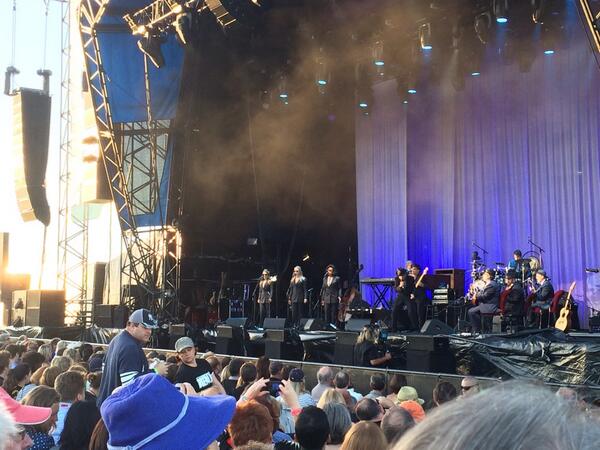 ‏@chelsea_hunter - Being woo-ed. Falling in love with life. Leonard Cohen. (He skips, you know.) #DayOnTheGreen @… http://instagram.com/p/hDgtwwKDbl/

@ciaranmccool - - `Finishing behind the bar and catching a bit of Leonard Cohen performing! #onthegreen http://instagram.com/p/hDnmAyiDog/

@chelsea_hunter - If you can't learn something from a Leonard Cohen lyric, you've given up on learning. Such gentle wisdom in his words. #ADayOnTheGreen… http://instagram.com/p/hDpmR7qDVH/

@CathyShay - Leonard Cohen was amazing. What an experience! And NO rain or bad weather

@baterfly - Sublime Leonard Cohen concert. So privileged to have been part of ringing the bell that still can ring again.

Well - now we know one song on the set list

Save The Last Dance For Me
http://www.youtube.com/watch?v=qU3LKbfjQSU
Top

What an amazing night. When it looked like the concert would be cancelled due to the storms, the stars came out, in the sky and on the stage. Leonard sang "I tried to leave you", but it looked like that was the last thing he wanted to do to the entralled audience.
The Partisan
http://youtu.be/unjPs30iwaM
Sydney & Bowral 2009. Lissadell Sligo July 2010 (what a night!). Sydney & Hanging Rock November 2010. Bimbadgen Winery, Hunter Valley, Nov 2013. Sydney Opera House, Dec 2013.
Top

Leonard seemed to enjoy the reception he received.

In Sydney the week before he had a standing ovation before he sang a note. Just applause and a lot of whistling at Bimbadgen, but they were not letting him go easily.

Set list I think same as Sydney but with additional songs in the encores - I Tried To Leave You and Save The Last Dance. Not a body there that didn't enjoy the show.

The weather was perfect for the concert, though the ground was very wet and boggy in places. Nobody cared too much about that. Some random FB comments
>>How incredible was last night.

>> The weather, which looked set to ruin this evening, played nice. As soon as we arrived it cleared and we even had to try and block the sun... no rain at all. And then after listening to the fabulous Adalita and serene Archie Roach we had the extreme pleasure of kneeling at the altar of Leonard Cohen!!!!

Well, we didn't actually kneel, we left that to him as it would appear he has better knees than any of us! Just over 3 hours of sublime entertainment with only a small break. Every song you can imagine, his band a remarkable tour de force! It was the kind of concert that gave you goosebumps and brought you (me) to tears on more than one occasion. I felt so privileged to be part of this experience. I am still overwhelmed and entranced.


From a renowned Leonard 'resister' - >>a truly great concert. Thanks Len you give all us old blokes faith in the future

From another slight resister >>Leonard, better than I expected, a consummate performer. He is like fine wine, improving with maturity; couldn't get the smile off my face, even queuing for the bus back to the carpark. Even Bruce Springsteen tragic,(partner), rated him AAA+
Top

Hi.
Many thanks for your Pictures; many thanks for your comments (all of you, who have wrote something about the Concerts down under,,,
We soooo happy, for you, that you can be in another Leonard-Cohen-Concert!
There's is actually nothing else, where we woukd rather be, really, but we are enyoing your Fotos, Textes:
Go to the Concert, you'll never will regret a Night with LC and the UHTC!
For us, it was a outstanding Year with LC and the UHTC, now it's your turn...
And a Openair brings a very Special, intimate Feeling... even when it rains a little bit....

Thanks for sharing the Fotos and your Emotions with us!
Enjoy the Concerts and give them a big Hand from us!
Uwe + Susanne, Switzerland
Top

Some nice pictures and I'm glad the sky cleared for you all in the end.
the art of longing’s over and it’s never coming back

Thanks - If I believed in such things I might think it was some divine intervention...

Thanks Lindy,
nice pictures and Report. Glad you have the chance to enjoy the concerts in your country.
Remembering our meeting in Verona best wishes from Berlin, Christel
Top

Verona was so special and getting to meet so many from the Forum was a real treat. Now maybe next Oz tour some visitors?

(Yes I am in a greedy mood). Now Charley mentioned a new CD that I think was new songs, so that, and a new concert release would be just fine by me to.
Top

Finally have some time to write this report. Got in late from the concert and have been travelling all day yesterday since 4:30am and now finally in Cairns .... and guess what? It’s raining of course! Thunderstorms predicted this afternoon .... seems to be following me! I was so hoping Leonard and the crew’s first look at this beautiful place would be with its normal brilliant sunshine. I told Leif B if he thought Pula was hot, wait until you get to Cairns! He replied with “I’ll bring my space suit!” I’ll look out for that!

Anyway back to the Bimbadgen Winery concert. You know, it just keeps getting better! It was a truly unique experience in more ways than one. Storms with thunder and lightning and heavy rain all the way to the venue. The bus lost its demister function and we had to travel part of the way with the door open for the driver to see the road. It seemed there was every chance the concert may be cancelled. But miraculously the sky cleared and except for some lingering dark clouds (which eventually disappeared) over the valley the sun shone brilliantly. I think it was divine intervention and even Leonard said so. He stated at the start of the concert as the UHTC was travelling to the venue on their bus they were thinking that it wasn't looking good. He said that G-d must be smiling on us. I can’t remember the exact words (recorder malfunction) but it was something along those lines. 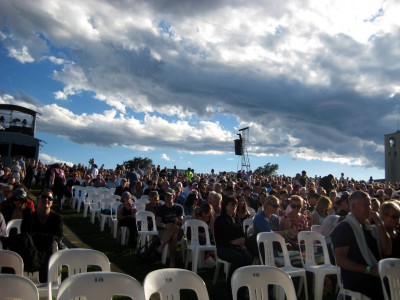 There’s nothing like an Aussie sky after a storm. I could see the band watching the shifting sky and the night come on. Roscoe kept his shades on until after Anthem.

Once the concert started at 7:05pm you could tell we were in for a special night. Leonard seemed so relaxed and fed off the energy of the vocal audience. There was also a bit of European flavour in as much as everyone was singing along in unison and loud to quite a few songs – something Aussie folks don’t usually do. Maybe some of them had a glass or two of the local vineyard vintages. Even so, I think we were treated to an extra song because of the atmosphere.

I should say that I had an absolutely perfect centre front row seat and close to the stage. The front row was the only one not sitting in the mud; we had a raised platform – most welcomed. Before the show started I spoke to Mickey Sullivan about the tour plus he very kindly said he would save a (slightly water damaged) set list for me and he was true to his word. Thank you Mickey! I’ll see you tomorrow night and hopefully with the same result. 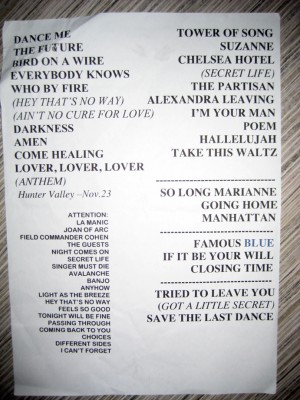 I wore a T-shirt I designed with symbols meaning I love UHTC’s violin. Being so close Alex saw it, and seemed to get the message because he pointed, gestured and smiled. Mission accomplished! 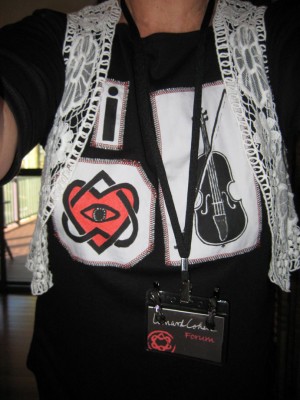 Leonard on two occasions referred to “here tonight” - in the Partisan and Hallelujah. I think “here tonight” was obviously on his mind ‘here tonight!’
He hasn’t done that so far on the tour in Oz until now.

After Take This Waltz Leonard says: “I’d like to thank this Australian crew; we could never have put this show together without them”. So nice to hear him say that.

After Closing Time I held up one finger and said loudly and repeatedly chanted “one more, one more.....” A lot of people around me joined in then I Tried To Leave You was sung. Again the same pleading gesture and cry and we were rewarded with Save The Last Dance For Me. Such a vocal crowd and I have to say I certainly played my part in it. It was a most enjoyable concert and at such close quarters, it seemed reciprocal from the other side of the stage as well.

It’s funny you know, because I’m going to so many concerts in such a short space of time I was hoping the set list would change a bit but once the concert starts is just doesn't seem to matter. Even so, I still would like to hear some of the songs on the stage set list sung like Avalanche, Joan Of Arc, Hey That’s No Way To Say Goodbye, or Night Comes On. Unfortunately, The Window or The Traitor aren't even listed there at all. I would have thought seeing now there is a virtuoso violinist, those songs would be given an airing, especially The Window. But there are still quite a few concerts to go and I’m always hopeful. Let’s see what happens tomorrow night.
Last edited by B4real on Mon Nov 25, 2013 1:11 am, edited 1 time in total.
It doesn't have to be perfect, it just has to B4real ~ me
Attitude is a self-fulfilling prophecy ~ me ...... The magic of art is the truth of its lies ~ me ...... Only left-handers are in their right mind!
Top

Photos taken in order of the concert: 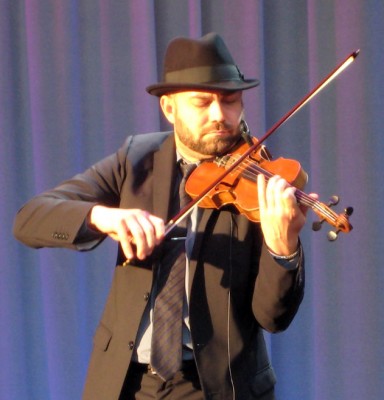 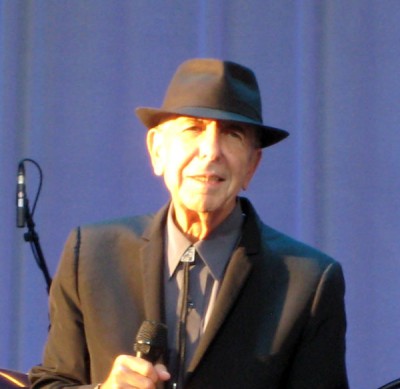 I swear he's looking directly at me! 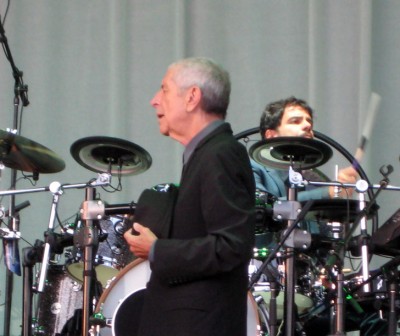 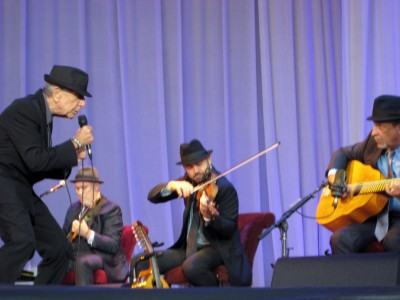 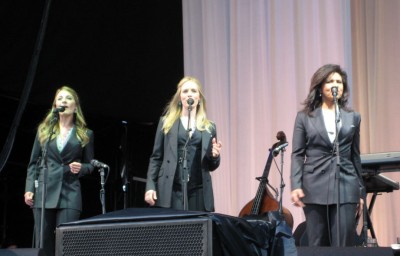 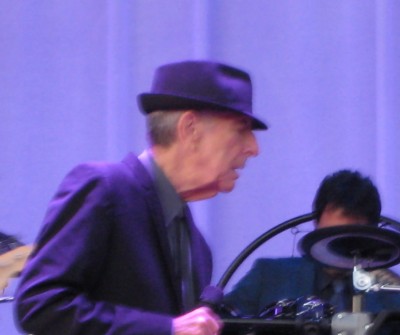 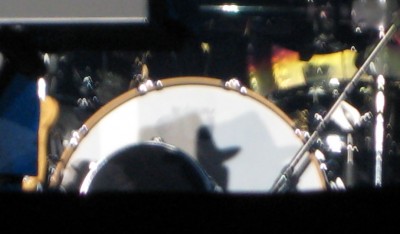 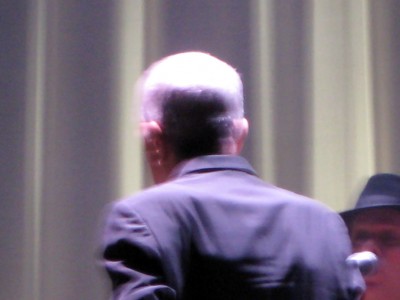 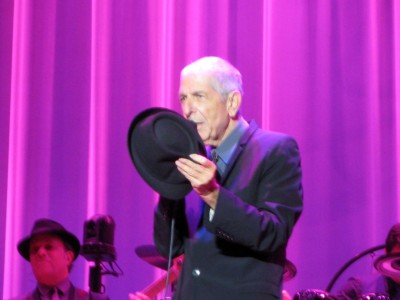 It doesn't have to be perfect, it just has to B4real ~ me
Attitude is a self-fulfilling prophecy ~ me ...... The magic of art is the truth of its lies ~ me ...... Only left-handers are in their right mind!
Top
Post Reply
35 posts