The venue is O2 Arena, a multi-purpose indoor arena on the Greenwich Peninsula in London, England - the second-largest arena in the UK (after the Manchester Arena). It opened in June, 2007. Seating capacity for concerts is up to 20,000. 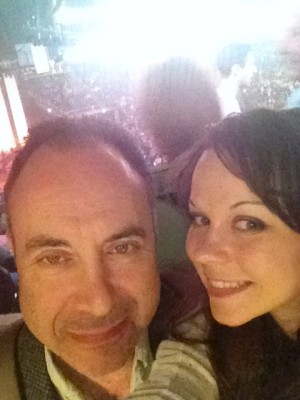 Did we enjoy it?

Straight after Yom Kippur, I found Who By Fire especially moving. Similarly, hearing him sing about the Gates of Mercy.

He was more sprightly than the last couple of times I have seen him. I though he was in very good form and he seemed so happy. I'm sorry we didn't meet any other fans we knew, although delighted our stalker was nowhere to be seen


@MrRobertTimothy - All my moments of being a misunderstood teenager are coming home, listening to Leonard Cohen... pic.twitter.com/RLBt7oy4qh
https://pbs.twimg.com/media/BUOyb8MIIAA-fu7.jpg

@sarafbw - O2- amazing first set from Leonard Cohen and band. Lyrics the same but his incredible voice is even more moving. Second set in 10 minutes

‏@flacoarevalo1 - "we are so blessed to be alive at the same time as Leonard Cohen."

@charlie_burton - Leonard Cohen at the O2: "I'm not going to hang up my gloves just yet, but I can see the hook." pic.twitter.com/LllmqVglst
https://pbs.twimg.com/media/BUOraEyIIAAkBM2.jpg

@chazza04 - At Leonard Cohen. Amazing. There have been tears.
https://pbs.twimg.com/media/BUOq2xrCAAARhf5.jpg

@BlockFHatter - Just in the interval at Leonard Cohen at the O2. What an amazing experience quality musicians and the great man himself.

@amoozbouche - Some old guy called Leonard Cohen is performing a bunch of Alexandra Burke songs at the O2 tonight.

@andrewsoar - Still on form... Still with a spring in his step Leonard Cohen live at o2 » brill bday present!!!

@HarvGoldsmith - At Leonard Cohen concert. The height of Cool! Best sound ever at 02

@AlannahCryer - Such a joy and honour to see Leonard Cohen in concert once more. Always sublime; utter gentleman.

@bronactitley - The #leonardcohen concert at the o2 is absolutely wonderful. But it's getting v late now &One Direction still haven't come on. #confused

@olparker1 - Leonard Cohen magnificent. My daughter the youngest here by 30 years. And by 30 miles the coolest. We’re having a time.

@simonegerton - #leonardcohen - first gig I've EVER seen where the sound's not too loud! Hooray for that!

@matt_sendorek - @DavidVick5 Welcome! I'm at the most expensive evening concert I've ever bought tickets for - but it's quality #leonardcohen

@BigAppleHotDogs - At #leonardcohen concert. Thx 2 @BabesaboutTown I've loved him since a kid. I had no idea he was so charismatic, tho! #pureclass

@sueontour07 - We're all in love with Leonard Cohen @ O2arena tonight. What a man, accompanied by brilliant musicians and backing singers. Perfect!

@IMakeGoodTea - Leonard Cohen at the O2 arena was astonishing. What a gent.

@BenedictFarse - I saw Leonard Cohen tonight. 78 yrs old and exquisite. We all have to up our game. X

@jupiterconjunct - Leonard Cohen is a legend

"I'm not quite ready to hang my boxing gloves, but I know where the hook is.." #LeonardCohen #London

An experience beyond words. #leonardcohen #london

I thought this was the best version of Take This Waltz I have heard in many years. Conversely, I found the way he sang Hallelujah a little inferior to other performances I have seen. I didnt like the way he cut the word "hallelujah" quite as short as he did. Of course this is a very very minor complaint. Did you think famous blue raincoat also sounded rushed? I guess as the curfew was approaching time became precious. A shame closing time was cut short...but that has never been a favourite of mine so I wasnt so upset.

Obviously there are the usual personal disappointments at songs that were omitted: sisters of mercy and anthem were suprisingly missing. And I was hoping for night comes on, but alas it was not to be.

The musicianship I witnessed tonight will never in my live be equalled or bettered. Every single member of that band is breathtaking

Overall it was a truly wondrous experience of the usual exceptional standard.

Farewell Leonard, I feel this will be the last time we meet.
Top

@bradwebbmusic - Watching my sisters singing with Leonard Cohen at the 02. PROUD. http://instagram.com/p/eS16VxiMvd/

Well, that went by quickly... Leonard was in a great mood. Lots of interaction between him and the band. The new song was fantastic. A nice long exchange during The Tower of Song. Lots of weird unnecessary pushing during the stage rush before the encore. A rather abrupt ending. Sunday, O2, curfew. Enough said. Overall, a truly wonderful night. Please don't hang those boxing gloves, Leonard. Forget about the hook.
Top

I think this is London video -

Against all odds, it was an excellent evening at the O2. I wouldn't have gone to this venue again by choice, but Frances Clynes (who came over from Ireland) kindly gave me a ticket. I also managed to fight off a bad cold, just in time. Fortunately the tube trains were running okay, and we arrived at the venue at about 6.30pm. I briefly cast an eye across the merchandise, but found it all rather tacky. Actually, the "extended friends" T-Shirt with Roshi etc. on the front is quite novel, but I wouldn't want to wear one, or for that matter pay 25 quid for it! Getting any sort of drink at the O2 is of course virtually impossible, but we managed to survive without one (the break of course was spent queuing for the loo). That said, I wish that O2 would at least make it easier to purchase a bottle of water. Seated five rows back in A2, we were probably surrounded by Forum members. However the only ones that I met were Sue Merlyn and Paula. Jim Devlin came and said "hi", and I was able to wave and greet Julie Felix as she walked past. Other meetings and greetings were fleeting, though it seemed that virtually every astrologer I know who’s into Leonard was situated somewhere in A2.

Having been to Brighton, I knew roughly what the set-list would be like and felt less disappointed by what was missing. It was good to have “In My Secret Life” and the recited “1000 Kisses Deep” back. It was also good to hear “I’ve got a Little Secret” for the first time (I’ve avoided listening to it online, so as to keep the surprise element). As a blues, it’s similar to “The Darkness”, but the lyrics are very good. The “Old Ideas “ songs have grown on me in their live versions, and I enjoy them more each time I hear them (“Amen” included). I also appreciated “Lover, Lover, Lover” more this time. Although it’s no replacement for “Anthem” I guess it means a lot to Leonard at this point, since it’s now more explicitly a dialogue between our hero and God. In fact, it's amazing how strong all of the songs still sound live, and how Leonard is still able to give them his all. Outstanding songs for me were "Bird On The Wire", "“Take This Waltz” and Sharon Robinson’s show-stopper “Alexandra Leaving”. Actually, I think the end of the set could do with a bit of re-structuring, as the audience rushed into the aisles from "Marianne" onwards, and from then on were standing up.

Leonard was on great form, and in excellent voice. I liked his saying about not quite being ready to hang up his boxing gloves but that he knew where the hook was! One guy in the audience shouted out “Thank you for a lifetime of beautiful music” and, after a band-member clarified the message, Leonard expressed his gratitude. At another point, when the audience got a bit vocal, he used one of his old lines “Would you please appoint a spokesman”. The band were all up to scratch musically, and I focused more closely on some of the musical passages, this time. I liked the team work at times between Javier Mas and the violinist and guitarist. The Webb Sisters looked and sounded as beautiful as ever, and I loved their contribution to “Come Healing”. It was also great that the audience remained silent for “If It Be Your Will” even though they were standing-up, by then. Personally, I'm hoping that Leonard will return at least one more time. It would be a great achievement to tour a new album at 80.

It's difficult to know what to write, having just watched a musical legend take an entire arena full of people in London on a musical apotheosis.

Experiencing Leonard Cohen tonight at the O2 Arena was transformative. Any other adjectives seem cliched.

He started the show by warning that his touring days may be numbered; "I'm not yet ready to hang my hat but I sure can see the peg." To be fair, the dude is 78 years old.

Hence, I feel a little bit of a fraud writing in judgement of Leonard Cohen because who am I to adjudicate? I've only known him since I was young and that was in the late 90s.

I had an old fashioned childhood; no reality TV or Rihanna but instead red wine stolen from my parents' drinks cabinet and Leonard Cohen on a forgotten LP.

When I was 17 I used to stay at my friend Nicholas's house in Cape Town. He would smoke cigarettes, I would drink shitty wine from a plastic cup and we would listen to 'adult' music, pretending we were Know-It-Alls dispatched from our jobs at the LRB. Leonard Cohen, Tori Amos and the standard Rodriguez were the standard.

And then tonight, sitting in the O2 and listening to 'Bird On A Wire' or 'So Long, Marianne' plus so many others; all of those memories come storming back.

Leonard Cohen on stage is singular. It's not just the voice but the backing vocalists and the band. And the choice of songs. And the experience of watching an old master at work. He tilts on stage like some contorted legend from a Tim Burton movie.

His music means something to me, as a spotty youth, and it means as much to the thousands tonight who packed the O2 arena. Someone far more eloquent than me will describe the concert in detail and explain why it was mattered.

All I can do is a share a few snaps I grabbed on the iPhone.


Leonard Cohen performing at the o2 Arena in London

It doesn't matter which you heard
Roman aka Hermitage Prisoner
Top

the holy or the cut-short hallelujah.
Top

Thanks for your excellent review, John! I'm always interested to read other peoples' views of a concert I attended. To be honest, I didn't enjoy this one as much as Birmingham last weekend - to me Leonard seemed less energetic and passionate last night, which is not to say that I didn't thoroughly enjoy every minute of course!

I thought the guy who called out said "meaningful music" rather than "beautiful music"...... did anyone else get that?

I have to say that the sound at O2 was brilliant - way better than NEC last week - but that could have been due to the fact that we were sitting in the middle of the auditorium last night whereas we were on the front row right next to the speakers last week. It was also nice to experience some laid-back security after the NEC fiasco.