The atmosphere was GREAT although there was 45 minutes delay in the beginning of the concert.

The feelings were happier than in Pula and it was lovely to notice Leonard can still surprise the audience while he finished the perfect concert by singing (did I forget, do I remember...) "I can't forget"!! That was really inspiring!

Thanks for the smiling band and also thanks for the Swedish Globen arena: the acustics, air condition, all organizations were better than in many other venues! We Finnish people have a GOOD neighbour country!!

We missed Waiting for the Miracle... Pictures later...

Ben Carrick ‏@bcarrick01 4- Sometimes the greats are not as great live as you hoped...not Leonard Cohen. A class act tonight, vintage in all the best ways! 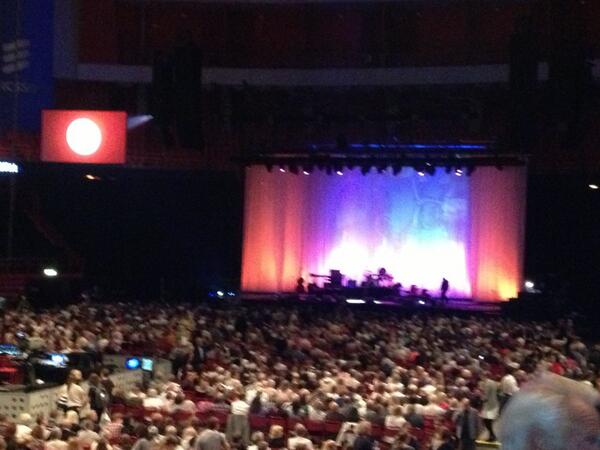 Päivi from Finland wrote:The feelings were happier than in Pula and it was lovely to notice Leonard can still surprise the audience while he finished the perfect concert by singing (did I forget, do I remember...) "I can't forget"!! That was really inspiring!

Ah perfection! I thought he can't do anything cooler with a setlist than ending the first set with the new Lover Lover Lover.

So, did LC put his blessing over the chords of I Can't Forget, instead of reciting some poem in the end of this song?
Roman aka Hermitage Prisoner
Top

Did the concert open with "Dance Me" as it normally does? I'm guessing it was not "Bird On a Blue Raincoat" as one Tweeter announced...

HelenOE wrote:Did the concert open with "Dance Me" as it normally does? I'm guessing it was not "Bird On a Blue Raincoat" as one Tweeter announced...

Here's a pic of the setlist I got from the stage guys:

(but as someone pointed out, he finished with "I Can't Forget")

It was my second time seeing Leonard live (first was Helsinki last year) and he was, of course, magnificent. The venue was really nice too, though there was some strange kid of echo sometimes.

P.S. In case the awesome lady who was sitting next to me (front row, seat 51 I think) comes on this board, here's a shoutout to you

update: here's one video http://youtu.be/y5LfeHhRcsk (Going Home), the rest will be on the same channel sometime soon

Video uploaded by Per Kassman

Leonard Cohen will soon turn 79 years but is impressively bright and is on a world tour in the name of love. Thursday evening, he, his musicians and choirs shoes a stopover in Stockholm and played for a nearly packed Globe.

Before Leonard Cohen and the band came out on stage appeared the icon of their tour, World Tour 2013, on two large screens on either side of the stage. The symbol of the tour is two hearts entwined.

[/img]
lc_logga Two hearts in the symbol on the stage covered a large curtain back wall. The curtain was lit in warm red color.

Quarter past eight came the band and choirs shoes in and then came Leonard Cohen injoggande dressed in suit and hat. He sits forever squatting on the floor and sing "Dance Me to the End of Love." Moreover sang Leonard Cohen songs many squatting - it's probably not many who will soon turn 80, which is so soft in the body. I guess that's his many years as a Buddhist monk who left their mark. Until the break nine fifteen concert goes totally in love. Leonard Cohen's dark voice, violin beautiful tones, choirs cow soft voices and the fantastically skilled and attuned musicians creates an enchanting whole.

- It was a few years since we were last here, he said. We do not know when we can come back, but we know that we tonight will give everything we have.

They did. They played in two rounds and the last song faded out shortly after 23:30. During the first round until the break he offered including "Repend," "Birds on a Wire" (where the guitarist had to show off his dexterity), and "The Darkness". After the break it was time for all the big hits that everyone loves as "Suzanne," "Chelsea Hotel," "I'm Your Man", "Hallelujah", "Take this Walts" and "Sisters of Mercy". He is a great artist and will also offer the entire concert his fellow musicians and choirs shoes at a moment in the spotlight. In several of the songs get his musicians and singers carry the songs with violin solos, guitar solos and lots of songs.

Encore was there several times, including "So Long Marianne," "Closing Time" and "First we take Manhattan" - when the entire crowd became euphoric and sang and swayed with.

23:34 End concert. With his humble professionalism, subtle humor and warmth gave Leonard Cohen and his musicians really everything.

Most people seem to miss the point about why he is 'squatting'.
Is it the secret nobody wants to mention?

Who By Fire
http://www.youtube.com/watch?v=v2_5bdGIOV0
Top

I just posted the setlist in the Setlists thread, copied below for ease of reference. I can't believe that no one (apart from Leif) has mentioned the wonderful surprise addition of Night Comes On after Sisters of Mercy. First time this year I believe.

'Night comes on' is one of my all time favorites...I did hear it once in 2012. How wonderful for all those at the concert in Stockholm.
I love when Leonard sings 'Lover, Lover, Lover' and how cool he sang 'I can't forget'...this is getting exciting.
Thanks for all the news about the concert folks.
Leslie

Rodin wrote:Most people seem to miss the point about why he is 'squatting'.
Is it the secret nobody wants to mention?

There are no secrets! If You mean his health condition You make a huge mistake!!
Leonard is so well that he is able to move very flexibly and sing at the same time!! Try yourself and get out of breath! Leonard is 'squatting' because of making huge art and fully concentrating in singing!

Breathless, unfit men You can find from supermarkets!
Päivi from Finland

Hi Ksenia, you are the awsome lady, thank you for being my neighbor in this marvelous concert. It was really a pleasure talking with you.

Many comments have been made already, and I found it just a great atmosphere, the red chairs of the "Globe", the real good mood of Leonard and the band. For me it was the "grooviest" concert ever - if I may say so. Haven t seen them happier and in a better shape for a long time. I was so happy to hear "the night comes on". The strange sound experience I can confirm, but maybe it was because we set there at the very right wing and had to turn our heads to see what is going on stage and so were nearly parallel to the loudspeakers.
It was a great, great, wonderful evening and I am looking forward to some videos, might post some pictures later on myself.
Sylvia
Top
Post Reply
19 posts