Thank You Leonard, Roscoe and the band for keeping us alive!!

Yes! A 1000 kisses deep, la manic and save the last dance... and so many others: lover lover lover, sisters of mercy, going home,...
Everybody looked in good shape and humour. He makes it look so easy but it isnt: delivering such a performance...

Save the last dance

If it be your will

After a well slept night still same opinion: perfect! LC looked even younger than in September! And his sense of humour is fantastic.
That could be seen especially in the first part of the concert. 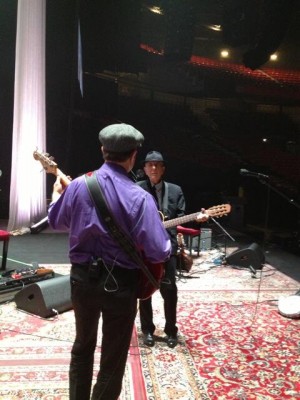 Just got home from Brussels, brilliant night, loved it. Excellent concert, as always. Thanks to all the band and 'behind the scenes' crew. Looking forward to Brighton now.......!
An observation - Mr C changed one of the words in Anthem (which is one of my all time favourites) from 'The dove is never free to the dove is always free'. Was there a particular reason for this - am I maybe missing something significant? Just curious.
Top

sueandtony wrote:Just got home from Brussels, brilliant night, loved it. Excellent concert, as always. Thanks to all the band and 'behind the scenes' crew. Looking forward to Brighton now.......!
An observation - Mr C changed one of the words in Anthem (which is one of my all time favourites) from 'The dove is never free to the dove is always free'. Was there a particular reason for this - am I maybe missing something significant? Just curious.

I noticed the same change in Mannheim and was also wondering whether this was intended or not. It seems as if it is.

Brussels last night my fifth time to see Leonard......a fantastic show, he just seems to get better with age. The sound was perfect from the start (i was centre front row seat) and Leonard's singing and the musicianship from the band were simply stunning. In particular his rendition of bird on the wire was incredible...i also enjoyed La Manic very much, it was my first time of hearing same and although i havent a word of French, it sounded most beautiful! Also from having seen his current rendition of lover lover lover on youtube which i must admit to having had mixed feelings about, when you actually see and hear it live i have to say it sounds great.
The only negative about the night for me was despite the fact that Leonard looked in great form and was very obviously enjoying himself, i felt that he did very little talking to the audience compared to other shows i have attended....i have always enjoyed immensely when he chats and jokes with the crowd but i felt that was markedly sparse last night......maybe he avoided doing so because of a percieved need to say the same thing in french and english would diminish the spontaniety somewhat?....anyway that is only a minor quibble and last night just left me looking forward even more to the three more shows i have tickets for this summer. 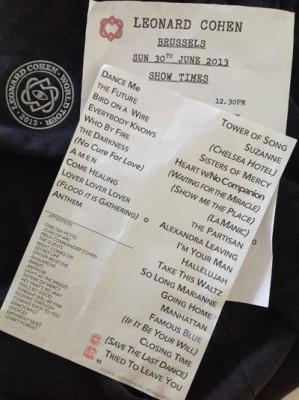 The morning after the concert i visited the ' grand place ' in central Brussels which was being prepared for an open air performance.What a perfect location that might have been for a leonard concert !

The Forest national arena seemed to me to be quite an ugly venue , even by the usual architectural standards for these places .The usually perfect sound was compromised by a ' sibilant echo' , at least where i was sitting . The start was 15 minutes later than the advertised time , and it's a puzzle that this seems to happen so often.

Having said that another great concert .Some wonderful performances - for example i think ' sisters of mercy ' was sublime and gains
so much from the violin.The Partisan , missing in north america, is powerfully back with a subtle change to the arrangement ,Sharon , Hattie and Charlie singing with Leonard from the start . The new arrangement of 'Lover Lover Lover' continues to impress- the webb sisters doing a good job on the chorus . It was great to hear 'la manic' and also to recognise it and know a little about the song and its writer - unlike in Montreal when i had no idea what it was , just that the Quebec crowd loved it .I also noticed the interesting lyric change in Anthem (from 'never free to ' always free')

The Brussels audience were enthusiastic , giving a few extended ovations ( and always nice to see Leonard appreciate these, an appreciation which i think is still felt deeply ). They were so enthusiastic that the volume of applause almost drowned out Leonard's various closing remarks (in French and English )! Very generous encores too : nice to have 'i tried to leave you' and 'last dance'- the latter inclusion seeming a last minute decision.
Someone in the balcolny shouted out something at the start of 'if it be you will'. It sounded slightly aggressive but i didn't understand what the shout was (anyone understand it ?)

The young woman sitting next to me had tears in her eyes for many songs and a big smile on her face at other times. That's how it should be at a Leonard concert.
I was in the 12th row for most of the concert , but nice to be 'allowed' to the front for the encores!

Looking forward to my remaining 4 concerts in Europe (all front row thanks to our wonderful presales).... Fortunately in my case not too compromised by the 'unfortunate' rescheduling .

Here is some video of the end of the concert