Well - it's Sunday, April 28th - and there is a show tonight - and it looks like we need a Concert Report thread.
Tonight will be the last show of Leonard Cohen's most remarkable 2013 North American tour.
This show was originally scheduled for March 9, 2013 and, like the Winnipeg show, it was rescheduled due to a flu outbreak.

Leonard Cohen’s upcoming performance at the Brandt Centre has been postponed to April 28.
Photograph by: AFP , AFP/Getty Images

REGINA — Reginans who have been waiting patiently to see Leonard Cohen at the Brandt Centre will have to wait a little bit longer.

Cohen, who was scheduled to perform at the Brandt Centre on Saturday, has postponed the show after he and his band were hit by a flu bug. The 78-year-old Canadian icon has rescheduled the show to April 28.

The event promoter spoke for Cohen in a media release: “In addition to his concern for the health and well-being of his musicians, Mr. Cohen wants to ensure the fans are given nothing less than the highest standard concert experience he has consistently delivered to audiences for more than 300 concerts over the past five years.”

All tickets for the originally scheduled concert will be honoured at the April 28 show. Refunds will be available at the original point of purchase

The venue is Brandt Centre, an indoor, multi-purpose arena that hosts sports events and concerts. It opened in 1977 and the capacity for concerts is approximately 7,129.

Based on pictures - it's outside appearance does not appear really imposing. I think you have to get into to it - to appreciate.

Of interest, the Brandt Centre was the venue used to host the 2013 Juno Awards - exactly one week ago today - at which Leonard Cohen was the recipient of two of the highest honors - "Artist of the Year" and "Songwriter of the Year."
Last edited by sturgess66 on Mon Apr 29, 2013 8:43 am, edited 2 times in total.
Top Travel Day and We’re Back in Regina It isn't even 7:45 in Regina, but the photos are already coming in on Instagram via Twitter: here are a few:

@SheilaColesCBC - The stage is set for a great night with the Bard of Canada Leonard Cohen! https://pbs.twimg.com/media/BI-wi1uCMAEc_Av.jpg 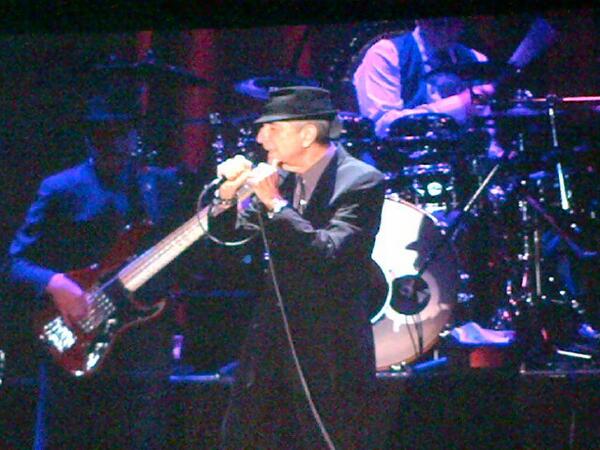 @RalphGoodale - Double JUNO winner last week, Leonard Cohen opens his concert in Regina tonight with Dance Me to the End of Love pic.twitter.com/V4Wc3MrYYu 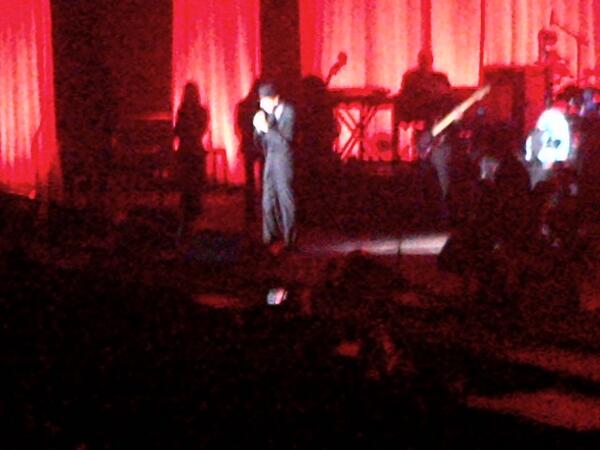 @MalcolmFrench - "I hope this isn't the farewell tour ... But we'll give you everything we've got." #LeonardCohen pic.twitter.com/wuJrPqY1EQ 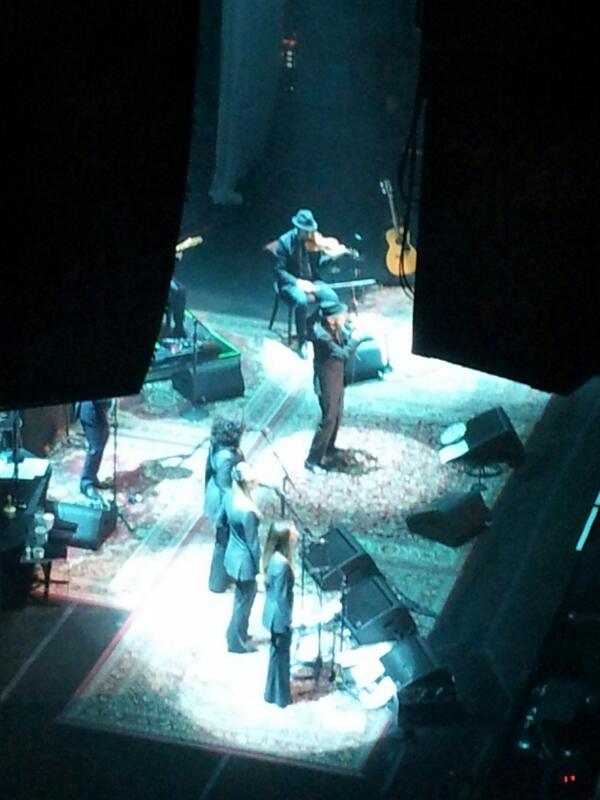 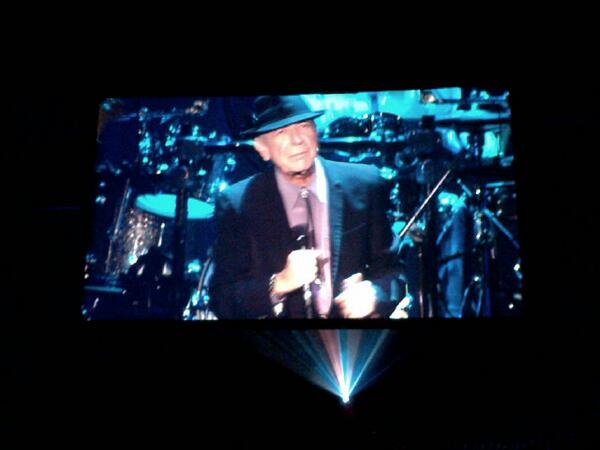 @JasonBrouwers - "I hope this isn't a farewell tour, but in a sense we are all on a farewell tour" - Leonard Cohen https://pbs.twimg.com/media/BI_JOYCCQAAo1dz.jpg 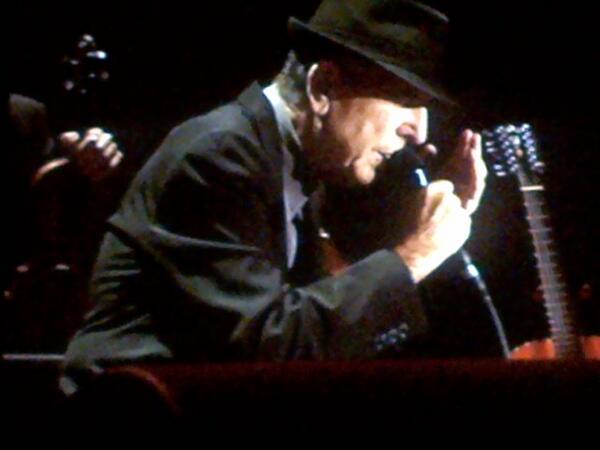 @RalphGoodale - There ain't no cure for Love - Cdn music icon and poet Leonard Cohen in Regina. What a talent! pic.twitter.com/H7dJanguFF

@DeanRugland - The passion Leonard Cohen sings with is incredible

@BJellybean - I’m floored by Leonard Cohen. I’ve already cried twice. This man is the living embodiment of class and poetry 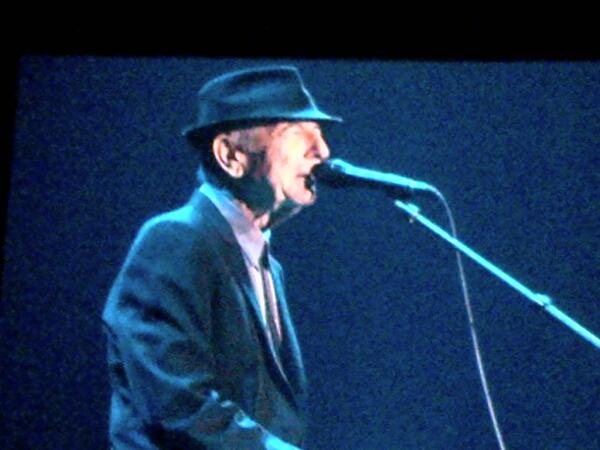 @MalcolmFrench - Ironically, I can see better on the screen, but I'm still drawn to watch the stage. Tower of Song. #LeonardCohen #yqr pic.twitter.com/6huZinObbW 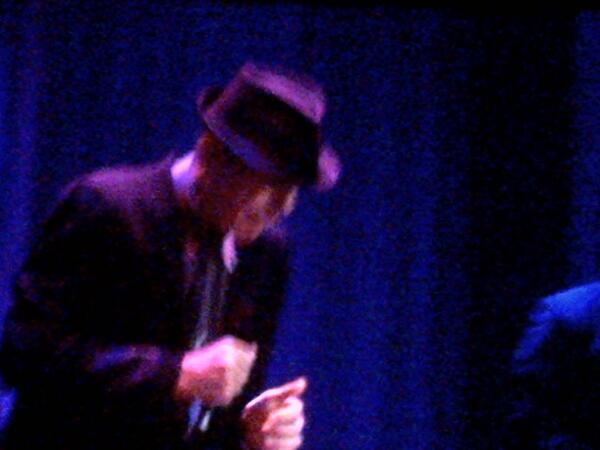 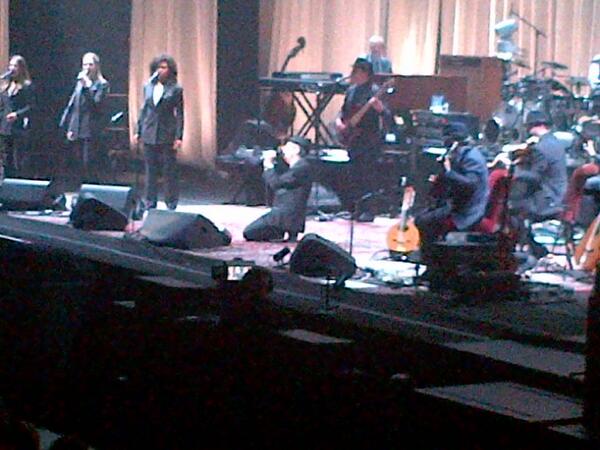 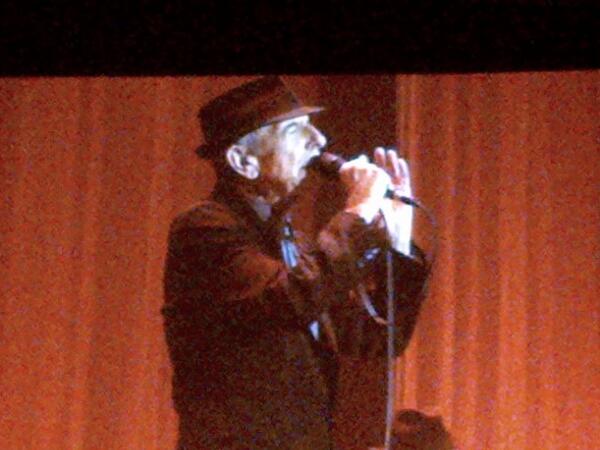 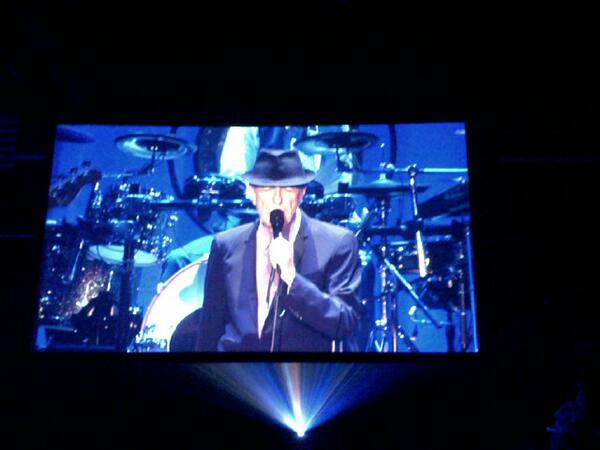 @RalphGoodale - @SheilaColesCBC - Leonard Cohen said he wld give tonite all he had. Now near midnite, close to 4 hrs of excellence pic.twitter.com/cVjcLwDga6

@AlexDocking - No he is not done yet. Finished 'closing time' then said 'if you have to go fine. We are doing a couple more songs.. #fantastic

‏@CorinneCJohnson - He is still playing. This is a wow concert. #leonardcohen

@AlexDocking - Classy finish to a near 4 hour spectacular. Full crew up on stage, for "save the last dance for me" #leonardcohen #spectacular

‏@derfries - I'd sell my soul for Leonard Cohen's voice. Who am I kidding, I'd do it for his bolo tie.

@AlexDocking - For the record from my earlier typo. Intermission was 20 mins. Show went 8:15 to almost midnight otherwise. #leonardcohen #fantastic

@kendrapottage - I swear,the most talented musicians in the world are in #leonardcohen 's band. Wowza! What a show!! One of the best shows I've ever been to!

@DeanRugland - Wow most amazing concert ever -3 encores of 3 songs each what energy. Thank you #LeonardCohen

@GordBarnes - A fabulous concert this evening in #Regina. Thank you Leonard Cohen and to your band members!!! #yqr

@_ThePaddy_ - I love Leonard Cohen so so so much

@brendanolenick - Maaaan, Leonard Cohen you're the classiest man around.

@trinahollinger - Leonard Cohen. What a phenomenal artist and soul.

@ahorseahorse - Thanks #leonardcohen for coming to #Regina. It was beautiful

Posted by The Webb Sisters at their Facebook site -
https://www.facebook.com/thewebbsisters

Thank you, Linda, for doing an amazing job of capturing a great night of tweets. When you read them all together and scroll through the photos from a variety of POVs, it gives an incredible sense of the excitement and energy of the concert.
We are so blessed to be around for this.
Top

Hope there were some forum members there who can post the setlist so we don't have to rely on the dreaded setlist.fm ........

I do love it when forum members are at a concert and post their impressions... It gives a different more personal flavor.
I do have to say when there is a concert where no forum members post (which is a rarity) it is nice to have the tweets to get the feeling of joy and enthusiasm of that particular night. Thank you Linda for posting them as otherwise we may not hear a word about that evening. They are short and full of a lot in those few words.
Newspaper articles give some indication but its not the same. There are also tweets on 'Old Ideas World Reporting' and newspaper articles that are precious.

Video uploaded by Debbie Mihalicz - Thanks!

@HeerJeet13m
I've flirted with Leonard Cohen revisions (thanks to @MissStaceyMay but having seen him perform last night am now in awe of the man.

Sooooooo amazing! My life has been changed forever! Class act!

‏@JJ_Ramone1h
Happy Monday, ladies and gents! I think it's safe to say that nothing will top Leonard Cohen this week. What an incredible show.

@DBartolf1
I'm glad I picked up a #leonardcohen t-shirt last night. Now I have something to wear to the #cannibalcorpse / #napalmdeath show in May.

‏@DBartolf1
#leonardcohen was in fine form last night. He played so many parts: Lothario was a given, but also vulcan, gangster, b-boy, sprite, zenster

‏@DBartolf1
... passive-aggressive self-deprecating insult comic and so much more. #leonardcohen even channeled #laurenceoliver as The Entertainer.

Helen - thanks for the "late/last editions" or "early next morning" tweets - good ones!

... At the very end, during Save the Last Dance, Leonard called us all on stage and we did our little steps, watching you, Regina, watching us, and our last rug-cut of Canada, last in North America; thanks for coming.

Hope we get video!
Top Regina, We Love You


Leonard Cohen Was Well Worth The Wait

REGINA -- While fans of the incomparable Leonard Cohen may have had to wait since early March for his rescheduled concert, the revered Canadian icon gave folks their money’s worth and then some on Sunday evening.

Performing for over three hours, the 78-year old singer/songwriter and poet laureate embarked on a lyrical journey with a vigour that outlasted many in the audience.

Taking the stage at precisely 8:15 p.m. and dressed in a suit and trademark black fedora, Cohen earnestly apologized for the “inconvenience” of previously postponing the show due the flu outbreak he and the band encountered.

Opening with Dance Me to the End of Love, the Montreal-born artist demonstrated an unexpected quirkiness, dropping to his knees while singing the lyrics. Surprisingly, this was one of Cohen’s go-to moves during many of the songs, while slowly stalking the stage through others.

Joining Cohen, on the elegantly simple staging, were his magnificent band and three accompanying singers. While the Brandt Centre often becomes a wall of sound during many rock and pop concerts, the old stadium sounded transcendent with every movement shining through as intended. The aural spectrum was spectacular as every instrument could be heard perfectly with nary a note sounding muddled.

While the legendary vocalist was the main attraction, and deservedly so, his band was absolutely sublime with a talent level that rivals any touring today. Javier Mas, 12-string guitarist, who also plays the bandurria (similar to a Spanish mandolin), was beyond impressive with his finger work and precision. Truthfully, Mas and violinist Alexandru Bublitchi would have been worth the cost of admission alone.

Cohen’s accompanying singers were also superb, with longtime collaborator Sharon Robinson taking lead vocals on Alexandra Leaving, and the Webb Sisters (Hattie and Charley) performing If It Be Your Will while also assisting with duties on the harp, clarinet, and guitar.

Known for his sardonic and self-deprecating humour, the near octogenarian quipped, “I hope this isn’t a farewell tour, but in a sense we’re all on a farewell tour. I promise you tonight that we’ll give you everything we’ve got.”

Later after a 20-minute intermission, upon returning to the stage, he once again teased the crowd thanking them for not going home.

If there was one complaint, it was a minor one, as the lengthy show became too much for many in the crowd who left after Hallelujah, or after the first or second encores. While it’s odd to complain about too much value in today’s concert industry, a start time an hour earlier may have been more appropriate considering a long work week beckoning for most and the show finishing mere minutes before midnight.

In perspective, without the prescience of knowing if we’ll be blessed to see Mr. Cohen again in Regina in the future, it’s a small price to pay.

Heck, if a 78-year old man can stay up that late to perform for us, who’s to complain about being a little tired the next day at work.