The venue, Moncton Coliseum is a multi-purpose facility that hosts sporting events, concerts and trade shows. It opened in 1973.
Seating capacity is approximately 6,500.
Leonard Cohen last played in Moncton on May 23, 2008 at the Capital Theatre.

It's not too late, and if I were you, I'd click on the Harbour Station website, or the Moncton Coliseum link, and grab a couple of the last tickets for the Leonard Cohen concerts this week. He's playing Saint John tonight (Monday, Apr. 15) and Moncton Wednesday. Seriously, you won't regret it in the least. I've rarely heard such uniform praise from concert-goers, reviewers, and previous non-believers, of all ages, all over the world. And even you lucky few who got to see him five years back on his first comeback tour, when he played the far more intimate Fredericton Playhouse and Capitol Theatre in Moncton, will want to consider that the show has changed, with new songs from his latest disc, and an even longer running time. Cohen played Saturday night in Halifax, and as expected, the reviews are all strong. Here's what my friend Meghan Scott had to say: "At the spry young age of 78, Cohen delivered almost 4 hours of hits at the Metro Centre on Saturday night with only one short break. In the spirit of his humility and the utmost grace, he spent much of the evening singing on his knees, but kept the mood light, joking about his age. As he literally skipped back on stage for all three of his encores, his boyish grin suggested he might not be ready to retire just yet. We hope to see you again soon Leonard."

Almost four hours. Three encores composed of seven songs, a total of thirty numbers altogether. This is Springsteen-length. Heck, it's more than Springsteen most nights. True, Bruce is still sliding on his knees and running much of the time, and Cohen's on his knees, but we're talking a very full evening. To top it all off, his latest, Old Ideas, either topped, or was near the top of almost every list of the best albums of 2012. He's doing six numbers from it in his live show, and most veteran bands, have trouble fitting one or two new songs into a set list, without annoying the audience. 78, and the guy's got it made as a performer.

I think the most amazing thing I felt at the Cohen concert I attended last tour was the admiration from the audience, and how it was reflected back by Cohen. Having spoken to him in the past, he is genuinely humble and deeply appreciative of the love from the crowd. There is a sense of peace over the whole show, a spell that unites the crowd and the musicians, something very rare in these hectic times. I know I'm repeating myself from several other posts, but I don't believe I've ever seen a better concert. I mean, what else would be better on a Monday night? Oh, I think there's a Friends rerun on...

What a nice and uplifting article

Hope everyone who's going has a great time.
Top

A little video from Joey - from Moncton, New Brunswick. Here is an early pic of the theater from Instagram:

The show has begun:


JayMuir ‏@JayMuir 2m
Cohen has the best-dressed stagehands in the biz. All wearing 3-piece black suits and fedoras. Boss. #leonardcohen

JayMuir ‏@JayMuir 8m
Forget your perfect offering. There is a crack, a crack, in everything. That's how the light gets in. #leonardcohen

Here's a great pic from Leif: 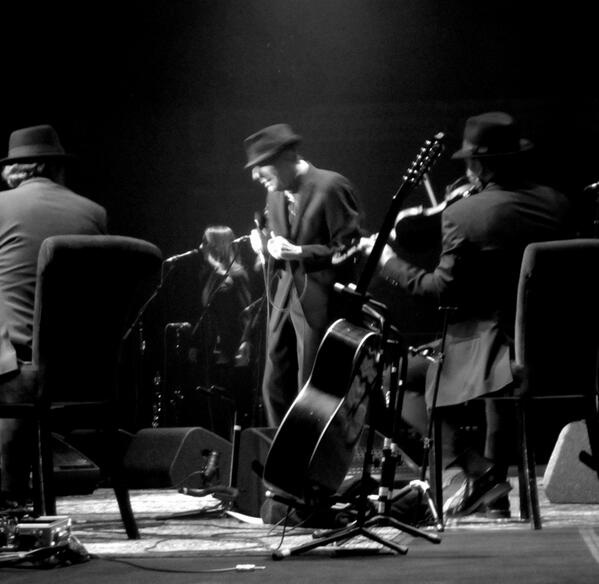 Another spectacular concert. La Manic was played. No poem recital, though. Ended with Tried to Leave You. I have had the tremendous good fortune to attend several LC concerts in the past five years, and I think that these Maritime shows will prove to be some of the most memorable for me. As expected, the musicianship was superb; if anything, it just gets better. Part of what makes these Maritime shows stand out for me is the joyful atmosphere in the audiences--people here seem to be very much into the music, and are very enthusiastic in showing their appreciation for Leonard and the band. (Actually, tonight, two young women sitting behind me literally squealed in excitement when Leonard first walked on the stage!)
Top

There probably are reports/reviews of these shows in the media - but probably will not be posted. The main newspaper "Telegraph-Journal" that serves for the province of New Brunswick charges a hefty fee for online subscription.

In advance of more recaps from forum members (thanks Ronaldson) - here a few more comments from "out there"- live, as it happened - or post show -


@kellyemeren - When Leonard Cohen lets his backup singer take over for a song, he doesn't leave the stage for a break; he stands with head bowed, hat off.

@TeamD_Jerri Forgot my phone to snag a pic but the Leonard Cohen concert was INCREDIBLE! He played for almost 4 hours! #bucketlistitem-massivelycompleted

@woolnapsack - Did I mention that #leonardcohen SKIPPED off the stage twice last night? As if I needed to love him more.

Well - the CBC has posted a review - no subscription charge -

I imagine everyone who attends a Leonard Cohen concert feels lucky. There's a sense of amazement in the audience, that this 78-year old can perform such an inspired show night after night, defying his age, even his body, with spry moves and unflagging energy. Plus, the legendary wit and charm has only been amplified by the decades. Perhaps the edge of his younger days has gone, the danger in his coal-black stare replaced by a twinkle and a raft of self-deprecating jokes. Many of his songs, especially the later ones, play on supposed faults. He plays them for laughs in concert, whether it's his "gift of a golden voice", or the recent "lazy bastard living in a suit" from Going Home on his new album, Old Ideas. The jokes, spoken or sung, the singing from his knees, the skipping and dancing, it's all part of the show, and his new millenium transition from merchant of gloom to Beloved Entertainer. A friend of mine (okay, a cousin) put it well on Facebook: "It's just as much a show of cordialness as a show of musical talent." Known for his graciousness in person, Cohen extends that now to the huge crowds, thanking all profusely, and practically refusing to leave the stage or wait for an extended call for an encore, saying "I know it's a school night, but we've come all this way, and who knows when we'll see each other again, so we thought we'd play a few more songs for you." Notice the "we" there, it's never about just Cohen on stage. Few go as far to acknowledge and feature the band as he, not only giving several introductions, but stepping aside for solos from all, even handing his vocal trio of Sharon Robinson and the Webb Sisters the lead on two numbers. And when introducing the band at the end of the first set, he also took the time to name the five key members of his road crew, possibly the first time the head rigger has ever been honoured on stage.

For many, this crack band was an equal highlight in the nearly-four hour show, both in its subtle backing and the restrained but tremendous solos. The group has changed a bit from his initial tour five years ago that came to Moncton, and the addition of violinist Alexandru Bublitchi and 12-string bandurria player Javier Mas has made for more expressive instrumental moments. For those of us who saw the last Cohen shows in this province, the very opening dates of this 5-year extended run, there was some trepidation that the switch from intimate, soft-seat venues of under a thousand seats to the cold hockey arenas would be a much less personable experience. But somehow the show actually felt warmer, the band more personable, Cohen friendlier. It's probable that after five years they've got this down to a fine art. Certainly there were none of the nerves of the opening night Fredericton show I was at back in 2008, and near the end of the night I realized that we'd witnessed a flawless show, not a note out of place. That is, until the drummer missed catching his brush after he tossed it in the air during his encore solo on the very last song.

There were plenty of touches and acknowledgements of the area. Cohen referred to beginning his tour here five years before, and prefaced several of the songs with introductions in perfect French, for the Acadian audience. Plus he sang a cover song, La Manic, by Québécois singer/songwriter Georges Dor, which he had first performed back in November in Montreal. Again, the lengths he goes to connect with, to give to, and to respect audience and his co-workers is not just impressive, it's inspirational. I guess that's the whole story really, that inspiration. We want to be like him at his age, in such grand health and humour, and such an interesting person. We want to see the joy that's out there, find the crack in the darkness where the light gets in, and have a few sexy stories to tell later on in life. It makes us happy that Leonard Cohen has been alive in our time.

Ronaldson wrote:Another spectacular concert. La Manic was played. No poem recital, though. Ended with Tried to Leave You. I have had the tremendous good fortune to attend several LC concerts in the past five years, and I think that these Maritime shows will prove to be some of the most memorable for me. As expected, the musicianship was superb; if anything, it just gets better. Part of what makes these Maritime shows stand out for me is the joyful atmosphere in the audiences--people here seem to be very much into the music, and are very enthusiastic in showing their appreciation for Leonard and the band. (Actually, tonight, two young women sitting behind me literally squealed in excitement when Leonard first walked on the stage!)

Totally agree - there was a great warmth and playfulness about these maritime concerts :
Will be hard to beat

It is interesting how tastes differ, I first heard La Manic in Kingston, and quickly came to like the music quite a bit. I do not speak Fench, so could not understand the lyrics; however, it did seem at certain points that too many words were being cramped into certain lines/verses (this is not as noticeable if one listens to the George Dor version). I do hope that Leonard finds the time to complete his English version of this song which he evidently has been working on for years.

I love "Le Manic" I wish he would record it on one of his next CD's.
Top
Post Reply
23 posts