The venue, the Halifax Metro Centre - a/k/a the "MC" - is an indoor multi-purpose sports arena that is also used for concerts. It opened in 1978, and is located in downtown Halifax, at the foot of Citadel Hill.
Seating capacity for concerts is up to 13, 000.
Leonard Cohen last played in Halifax in 2008.

Leonard Cohen is making good on the promise of his song Coming Back to You and returning to Halifax this spring.

On Saturday, April 13, Canada’s esteemed poet of song plays in Nova Scotia for the first time since a string of sold-out shows at the Rebecca Cohn Auditorium in 2008. This time around he’s performing a single night at the Halifax Metro Centre, one of four East Coast shows on the second leg of his Old Ideas World Tour.

Tickets for the concert go on sale on Friday, Jan. 18 at 10 a.m., along with shows at Harbour Station in Saint John on April 15, Moncton Coliseum on April 17 and Mile One Centre in St. John’s on April 20. Ticket price and availability details have not been released yet, but fans are advised to keep tabs on the tour page of Cohen’s website, http://www.leonardcohen.com and the Halifax Metro Centre box office site, http://www.ticketatlantic.com.

The 78-year-old Montreal-born singer-songwriter is currently touring following the release of 2012’s Old Ideas, his first new studio recording since Dear Heather in 2004. Receiving widespread acclaim, the album was featured on several end-of-year best-of lists, making it to No. 13 on Rolling Stone’s top 50 records of 2012, and a best album of the year nod from Uncut Magazine.

So - I'm walking up Spring Garden Road and decide to go to the Halifax Folk Music Centre on Brunswick Street. I walk in and the owner is pointing at guitars, ouds, bandurrias, etc. and speaking with this handsome older man. Another worker comes over and says to me "can I help you". I simply reply, "has he played anything yet?". The clerk looks at me and answers "No", moreso as if to say, "Why?". I said do you know who that is? "No", he replied. "Just Wait", I said.

Soon the man said "that one, and that one" and took off his jacket. He tuned the first guitar and began playing. The clerk then asked me who is that? "Javier Mas, from Barcelona", I told him. After listening for about 5 minutes I quietly shouted "Who By Fire". Javier looked at me, smiled and asked "are you a musician?", he asked. "No", I said, not wanting to go there with him. He was very friendly and speaks wonderful English.

After another 10 minutes of listening I felt it best to go. "Senor Mas, adios", I said - "Si, hasta manana", he replied, obviously understanding why we are both in Halifax today. This is getting off to a good start.
Top

One of the best stories I've heard about the tour, Steve. I love how you handled it.
Marie
Speaking Cohen
Top


Shannon‏@slynng131h
Met #leonardcohen today in Halifax. What a great experience! I've loved his music all of my life 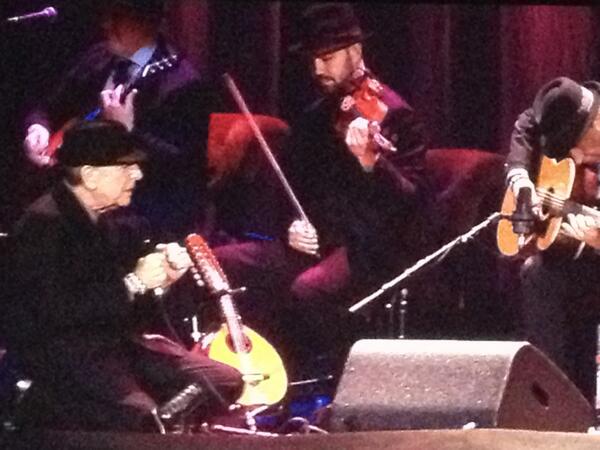 @DonMillsCRA - Leonard Cohen one of the coolest guys in world even in his seventies. A real inspiration.
Leonard Cohen, Canadian icon, at the Metro Ctr still fantastic after all these years. Will we see him ever again in Halifax? Sure hope so.

@nevillegilfoy - #Leonard Cohen and #webbsisters are utterly sublime. Words do not suffice

@HalifaxRenee - Leonard Cohen. Holy shit. You are the man. No wait, you are my man!

@bonstewart - Leonard Cohen just did a Gangnam Style gallop off the stage at intermission. mad joy.

@SvidlerPeter - LEONARD COHEN JUST GANGAM STYLE'D OFF STAGE. I have a new idol

‏@beckrbee - #leonardcohen this is the most amazing concert I have ever been too! The music is superb. Cohen is a fantastic entertainer.

@carolynraycbc - At the Leonard Cohen concert with @cassiehwilliams. Totally awesome. Cohen is rocking it.

‏@Tony_Tracy - .@SaraEhrhardt The show has been amazing so far. Not sure how #LeonardCohen can outdo his first set tonight! That voice! {@esooze swoons}

‏@scooke_herald - Two hours after it started, Leonard Cohen is just starting the second half of his Metro Centre show with Tower of Song & Suzanne. Epic!

@CH_RemoZaccagna - I'm ashamed that as a #Montreal native it's taken me this long to see Leonard Cohen in concert. @CH_RemoZaccagna - After the type of week it was in #Halifax, a Leonard Cohen concert is what is needed to soothe the soul & fill one's heart with love & hope.

@BravoGervais - #LeonardCohen runs back on for an encore! #Icon #Halifax crowd ballistic!

@skylark_lite - Crowd will not let Leonard Cohen leave the stage!

@brianaird - Just back from Leonard Cohen concert. His opening words, "we're going to give all we've got". Great words to start every day.

@ajlburke - So Leonard Cohen is a class act with a voice like fine bourbon in a velvet glove. Also: really really funny.

Tonight's show was masterful. Cohen is one of my literary heroes and it was an extreme honour to share a room with him this evening and so many people who love music, who love poetry and true artistry. I am overwhelmed and so soothed in my spirit from it all. Leonard Cohen is an artist in the truest sense of the word. It was a pleasure to take it in.
Top

I hope the bourbon in the velvet glove is still in the bottle, otherwise it's an awful waste of bourbon.


I saw Leonard Cohen for the first time in concert tonight. Transcendence. It's okay if I wake up dead tomorrow. Life's meaning: fulfilled.

39m
Never have I seen one place filled with so much dignity. #LeonardCohen

For a 38 year old, Leonard Cohen has A LOT of energy

Video uploaded by “joeshrubbery” - Thanks!

Heart with No Companion AND Save The Last Dance!

Leonard Cohen opens his show on the stage of the Metro Centre on Saturday night in Halifax. (TED PRITCHARD / Staff)

With a spring in his step, the Coolest Canadian Alive skipped onto the stage of the Halifax Metro Centre, and within seconds he was kneeling at the altar of romance.

Leonard Cohen bowed down before acoustic guitarist Javier Mas, plucking the nylon strings like a Barcelona balladeer on Dance Me to the End of Love, setting the tone for a show designed to reach through the heart and grasp at the soul.

There aren’t many 78-year-olds that can pack the Metro Centre, and while I’m sure many in attendance missed the intimacy of his multi-night stand at the Rebecca Cohn Auditorium nearly five years ago, Cohen did his best to make up for it with his focused performance, crystal clear sound and wry banter.

“Thank you for your very warm welcome when we came onto the stage, we deeply appreciate it,” he said, referring to the standing ovation that greeted his arrival onstage, before gesturing up to the nosebleed seats.

“Thank you for climbing to those heights.”

Cohen had his own heights to scale as well, with Sherpas in the form of his finely tuned six-piece band and the spirit-soothing backup vocals of longtime collaborator Sharon Robinson and the Webb Sisters.

It turned out to be a heckuva climb, nearly 30 songs high, with tunes slightly tweaked to suit the extra wrinkles in the singer’s familiar growl. Bird on a Wire is transformed into a Stax-style soul ballad, driven by Neil Larsen’s vintage Hammond B3, while the pointed wisdom of Everybody Knows remains relatively untouched in its arrangement.

But then there’s the masterful restructuring of Who By Fire, starting with Mas on the laud, a kind of a pear-shaped baritone 12-string.

The song proved to be a perfect lead-in to the Montreal bard’s thoughts about mortality on the Old Ideas Tour, named after his latest acclaimed release.

“There is one hazard in my hotel room; it’s in the bathroom, and it’s the magnifying mirror. If you’re over the age of 11, you’re best not to look into it,” grinned Cohen, who noted this mirror on the wall had a voice that wasn’t prepared to do his bidding.

“Lighten up, Cohen. How long are you going to pout? What increments must be changed in the cosmos to adjust the intensity of your struggle?”

Cohen didn’t have an answer, responding instead with a pair of new tunes from Old Ideas, Amen and Come Healing, ballads for those in search of spiritual repair, soaked in gospel hope manifested by the perfect harmonies of Robinson and the Webbs and Alexandru Bublitchi’s spectal, soaring violin.

Cohen is perfectly capable of lightening up, though, swaying seductively to Beck’s old-school disco rhythm for First We Take Manhattan and adopting a jaunty country beat for Heart With no Companion.

Of course, he was a country fan in his earliest days, later acknowledging his debt to Hank Williams in the second set opener Tower of Song, where he earned cheers of agreement from the crowd when he purred, “I was born with the gift of a golden voice.”

Unfortunately, press time loomed just as Cohen passed the halfway point, using that golden voice to deliver his first signature tune, Suzanne, with a pure arrangement tinged with melancholy and nostalgia for a perfect moment, captured in the amber of memory.

Now this show would be the same, the notes lingering in the air in our minds, after a magical night presided over by a master of song with few equals. He has built a mighty tower, but unlike Babel, his will stand for years to come.

3rd Encore
I Tried to Leave You