The venue, Copps Coliseum in Hamilton, is an entertainment and sports arena that opened in 1983.
The concert capacity is 19,000.
The City of Hamilton is located on the west tip of Lake Ontario. And I would suspect that a lot of Torontonians may be attending this show - since Toronto is only about 45 miles from Hamilton.

We really shouldn’t have to give you any reasons as to why this is a must-see show, but in case you do need convincing, how about the fact that this man is a musical legend? Or that a Leonard Cohen show is a historic/iconic show?

With a successful career spanning decades (and decades!), this Rock and Roll Hall of Fame inductee is part of a rare club of musicians who actually manage to consistently produce influential songs that make a difference in the musical landscape, rather than putting out a couple of hit singles and following that up with an extremely successful career in drug abuse, law breaking and court appearances.

The singer-songwriter/poet/novelist is on his Old Ideas World Tour at the moment, supporting last year’s hit album of the same name, and although we’re still pissed about the fact that he’s bypassing us and going from Hamilton straight to Halifax, we can’t be too upset; it may be time for a road trip anyways. After all, being mad at a musical genius is kinda hard.

Looking forward To Tomorrow very much! Leonard has a long hisTory of greaT shows in The Hammer!!!!!

Roscoe,Mitch & Alex having a little jam session before tonights show.

Looking at Twitter, there are a lot of excited people at Copps waiting for the show to start. And it sounds like it was a rainy day in Hamilton.

@cbhammer - My brother, Lee, my Mum and Rik just had some guy give them front row seats at Leonard Cohen! #messagefromgod !!!! https://twitter.com/cbhammer/status/321 ... 61/photo/1

@zoranbee - Rain-soaked in Hamilton, waiting for Leonard Cohen to come on stage.

@arvelomcquaig Going to Hamilton on the GO train for the first time for a Leonard Cohen concert. Hamilton so far seems like Transylvania, it's so gloomy

@buddhaontheroad If it has to be raining, at least there's Leonard Cohen.

@cosmiccrimes - I have a date tonight with Leonard Cohen. Now where's my waterproof mascara? 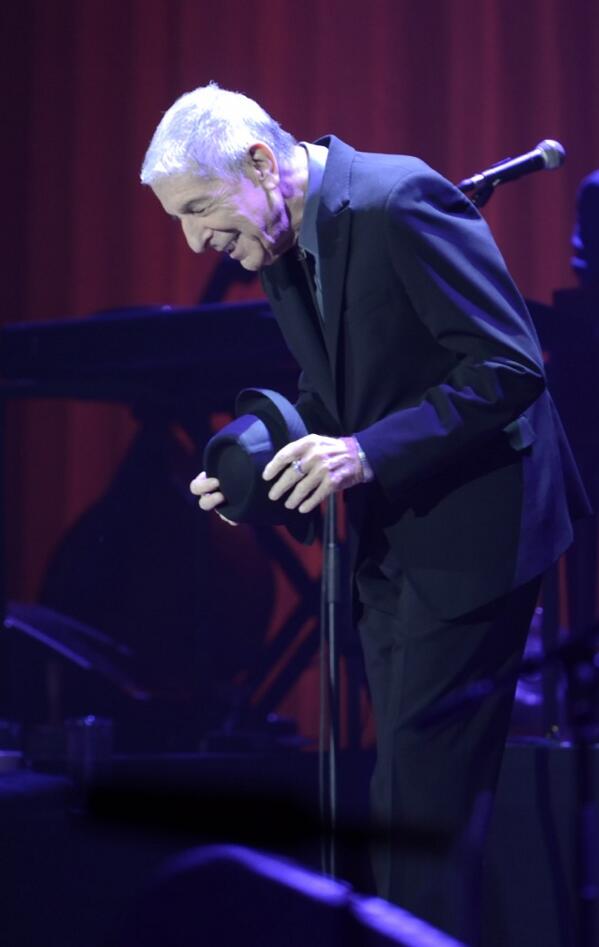 @pameladclark - Leonard Cohen is too perfect to be human. I refuse to believe he has ever done anything ugly or undignified in his life. @iambillymoon - #LeonardCohen is the one of the few men that will ever pull off a fedora.

@Too_Crowded - Leonard Cohen has spent more time on his knees than a hooker at Barton and Main St. #hamont #copps

@pointandwrite - This #leonardcohen concert has maybe the best indoor sound I've ever heard at a concert. #hamont

@alarson96 Save the last dance for me. #Leonard Cohen at Hamilton Place was AWESOME! Thank you Leonard!

@NatashaBangay - LEONARD COHEN WAS AMAZING. Best live performance I have ever seen! Great time with my dad ♥ pic.twitter.com/9DwfWHeIYJ https://pbs.twimg.com/media/BHd2daECEAA4Dy1.jpg

@hilary_johnston - Leonard Cohen played for 3.5 hours and I missed my train home, totally worth it. Amazing show.

@sam_berrie - Thanks Leonard Cohen for the 6 encores, I had no intention of going home to bed anyways ..... #justkidding #gettobed 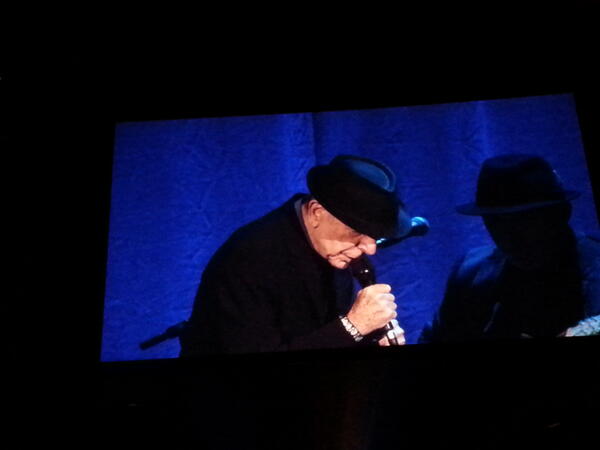 Dancing to the end of love … Leonard Cohen at Copps

Leonard Cohen, 78, brought his Old Ideas World to Copps Coliseum on Tuesday night, much to the delight of some 7,000 fans.
John Rennison/The Hamilton Spectator

Leonard Cohen brought his seemingly never-ending Old Ideas World to Copps Coliseum on Tuesday night, much to the delight of some 7,000 fans.

At 78, the Montreal-born poet showed no sign of slowing down, opening what was expected to be a three-hour performance with his 1984 anthem, Dance Me To The End Of Love.

“I hope this is not a farewell tour,” Cohen said after the opening number. “I don’t know when we’ll meet again but I promise you tonight we’ll give you everything we’ve got.”

Backed by a stellar nine-piece ensemble that included Sharon Robinson and the Webb Sisters on backing vocals, Cohen bowed humbly to the audience before meandering through hallowed songs like Bird On The Wire, Ain’t No Cure For Love, First We Take Manhattan, Who By Fire, The Future and Everybody Knows before taking a short intermission.

It was Cohen’s fourth performance in Hamilton since 2008 when he performed back-to-back concerts at Hamilton Place. Cohen, who is nominated for Artist of the Year and Songwriter of the Year at the Juno Awards in Regina on April 21, returned to Hamilton the following year to perform before a much larger crowd at Copps.

Graham Rockingham will file a complete review after the concert.

sturgess66 wrote:"I hope this is not a farewell tour,” Cohen said after the opening number.

I think it's safe to say we hope too. But this hint at his intentions is very heartening.
Top

From Joey - see the link for more - the photoset -
http://leonardcohen.tumblr.com/ Cohen at Copps
Dancing to the end of love …

The fact that Leonard Cohen is nominated for the Artist of the Year Juno alongside Justin Bieber demonstrates just how ludicrous awards’ shows can be.

The comparison between the 78-year-old poet and the 19-year-old pop star may seem laughable, but it’s got to be made. The folks who run the Juno Awards, which will be broadcast live from Regina on April 21, actually have these two “artists” nominated in the same category.

It’s The Bard vs. The Biebs (as well as Carly Rae Jepsen, Johnny Reid and Deadmau5).

As the 7,000 or so people who attended his remarkable concert at Copps Coliseum discovered Tuesday night – if they didn’t know already – Cohen is the true artist. Not just “artist of the year,” but artist for all of time.

Cohen trotted out on stage at 8:10 p.m. and literally skipped off it at 11:40, three-and-a-half hours later. He and his exceptionally talented nine-member backing ensemble performed 29 songs, including three sets of encores.

The first standing ovation began before he even had a chance to start his opening anthem, Dance Me To The End Of Love. There were several more to follow, as Cohen delved deep into his expansive repertoire of life, death, love, sex and the whole damn thing.

“I hope this is not a farewell tour,” Cohen said after the opening number. “I don’t know when we’ll meet again, but I promise that tonight we’ll give you everything we’ve got.”

He breezed through hallowed classics like Bird On A Wire, Ain’t No Cure For Love, First We Take Manhattan, Tower Of Song, I’m Your Man, So Long Marianne, Suzanne, Famous Blue Raincoat and the revered Hallelujah.

Just to prove that he’s still got plenty more songs in him, Cohen weaved in a half dozen entries from his latest CD, Old Ideas. The new material stood shoulder to shoulder with his better known work, especially Anyhow, a jazz-inspired song of not-so-deep regret, and Darkness, a bluesy howl that mines the black hole of depression.

Cohen’s sub-baritone delivery captured the essence of his poetry with stunning clarity, often from a kneeling position as if in prayer to an unseen muse.

Five years of rigorous touring has polished his stage show to a state of perfection. The stage patter is sometimes a bit too familiar and the set-lists are perhaps overly structured, but none of that really matters. Cohen’s graceful wit, unrehearsed humility easily wins over any audience. The man oozes old-school charm, even doffing his fedora and holding it to his chest when his three backing singers – The Webb Sisters and Sharon Robinson – took their solos.

Sure, Bieber can dance up a storm. But Cohen dances with his words. His songs are throbbing, unrelenting bites of both beauty and disfigurement.

To call Bieber an “artist” stretches the meaning of the word. He is a teen idol, teamed up with all the hit-making machinery the music business can offer.

Cohen is in a different class than the other nominated “artists.” Hopefully, the Juno voters have figured that out and, when the winner is announced April 21 for artist of the year, it will be The Bard accepting the award and not The Biebs.

I Tried To Leave

Thanks for posting the review by Graham Rockingham from the Spec, Linda.
I really loved this line:

Cohen dances with his words. His songs are throbbing, unrelenting bites of both beauty and disfigurement.

astranger wrote:I can't help but think that this 2013 tour has a fire to it that the 2012 tour did not. Simply incredible. It is an energy that is hard to describe, aside from the incredible talents of Leonard and the band. It just gets better.

Video uploaded by "ideology isforlosers" - Thanks!

If It Be Your Will
http://www.youtube.com/watch?v=DkhUO8rbc8w