Roscoe Beck is Leonard Cohen's musical director and bass player. Cohen is in a tier of musicians that no longer needs to do interviews, and Beck is next in the chain of command. We spoke with him about their upcoming show at the Oakdale (and two shows at Radio City Music Hall). The pair has been working together since 1979, a time when Beck happened to be in L.A. auditioning along with his band Passenger to be Joni Mitchell's backing band, when he was tapped by Cohen to record the song "The Smokey Life" for what eventually became the album Recent Songs.

"I drove over to the studio and walked in and there was [producer] Henry Lewy and Leonard, only, and my stuff," says Beck. "Leonard showed me a new song he had on the acoustic guitar, and I sat down with my bass and we played the song, just the two of us. The session went very well and at the end of it Leonard said, 'Let's do this again.'"

When Cohen was informed that Beck had an entire band with him, he brought them all in to work on the record and then to tour throughout 1979 and 1980. The guitar player from Passenger, Mitch Watkins, also remains in the band today.

At 78 years old, Cohen has managed to retain the full strength of his legendary live performances, and his recent shows have been lasting between three and four hours.

"Leonard is just amazing that way," says Beck. "He saves his energy throughout the day. He doesn't schedule a lot. Obviously, he doesn't do interviews. He rests up for the show, really. Sometimes he takes a nap between soundcheck and the show. Each night he says, 'Tonight we'll give you all we've got,' and that really is his ethic in approaching the concert. He wants every concert to be the best it can possibly be, and I love him for that. It's really a joy to work with someone who cares so much about his show, about the presentation and about the audience."

Though Cohen's voice has remained powerful and emotive as he's grown older, it has also dropped about two whole octaves, from high tenor (or maybe even alto) range into basso profondo. For Beck, this has meant performing without bass amplification on stage — just through a single in-ear monitor in his right ear, so as not to battle with Cohen for low-end frequencies. In his left ear, Beck takes instructions from Cohen and can hear what's going on in the room.

Many of the rooms on this tour, The Old Ideas World Tour, have been quite large indeed, including Madison Square Garden, Barclays Center in Brooklyn and Wembley Arena in London. Relatively speaking, the Oakdale show will be intimate, with a capacity under 5,000.

"Theaters just sound better," says Beck. "It's always a joy to play a theater. The challenge with an arena is generally an acoustical one. They weren't designed for music, they were designed for sporting events, generally, so there wasn't much care or attention given to the acoustics of the room. That's something we have to overcome, which I think we do very well actually. We keep the stage volume very, very low so there are no echoes of things rolling of the stage that the mixer has to deal with. If someone whispers on stage, you can hear it."

The setlist Tuesday will span Cohen's career, and while subtle differences exist from show to show, those who choose to attend will surely hear the big hits, like "Bird on a Wire," "Suzanne," "Everybody Knows" and, of course, the inescapable yet always stunning "Hallelujah."

"They're all favorites," says Beck. "Leonard's catalog is amazing. I've known him 34 years now and I never cease to be astounded by his writing. I would have many favorites. But if you were to ask me what's the most poignant moment of the show, it has to be doing 'Hallelujah' because there's nothing quite like playing that song with the man who wrote it. I sing backgrounds on that song along with the three female background singers we have, and I just consider it an honor. And of course, it always has the biggest effect on the audience."

The Oakdale Theatre - or "Toyota Presents Oakdale Theatre" has gone through many name changes and originally started as an open air theatre, a/k/a a tent, for summer stock performances in the 1950's. It is presently owned by Live Nation - seating capacity is 5000.

Any word yet as to who is playing bass tonight? Was anyone at the soundcheck?
Top

Steve - I don't know the answer - show starts soon though ...

Joey has become very creative with these posters - Steve Wilcox wrote:Any word yet as to who is playing bass tonight? Was anyone at the soundcheck?

Roscoe Beck will be playing again. Or is he playing already? Don't know if the concert has started already...

That is wonderful news. Thanks, Maarten.
The concert has started. Only one tweet so far, from someone saying that Leonard Cohen was 35 feet in front of her.
Top

Yes, it's great news. Roscoe let me know on FaceBook privately a couple of hours ago, but I only checked now... 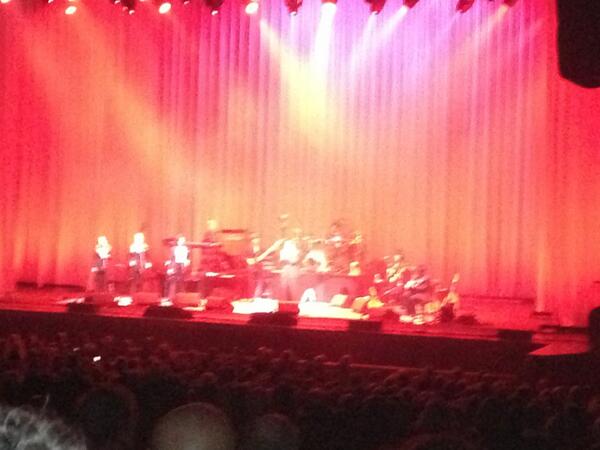 Based on an earlier tweet - I know this person is at the show tonight.
Welcome back Roscoe!

‏@ElizabethFricke - First we take Manhattan then we take Berlin #leonardcohen

SOOOOO glad to have Roscoe feeling well enough to perform. They are 'whole' again

Beautiful concert in CT last night.
Here's one of the videos I recorded.
Have a couple more but I haven't been to sleep yet. Will post them later today

dari wrote:Beautiful concert in CT last night.
Here's one of the videos I recorded.
Have a couple more but I haven't been to sleep yet. Will post them later today

Terrific video Dari - thanks!
And looking forward to seeing "everything you've got"

And so glad to see Roscoe is back!
MaryEmma
Top
Post Reply
32 posts