No reviews yet, but here are Joey's photos from Miami, to start the thread. It’s the Heat & the Humidity It’s a sit around and shoot the breeze kind of day today in camp. The thick humid air bakes in the flavor. And here are some of the tweets from the concert. Realized too late that they go in backwards chronological order! 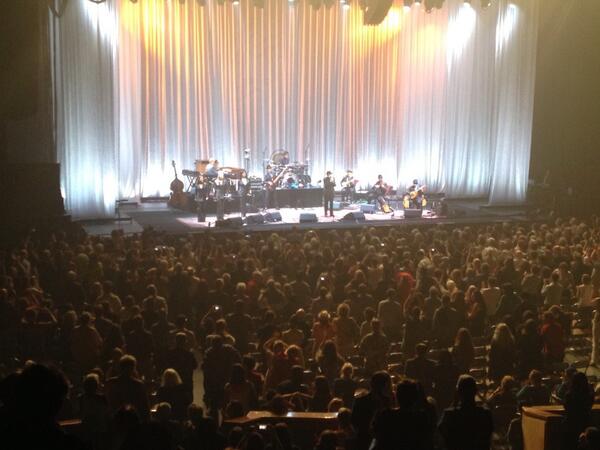 Kate ‏@efemmera 17h
"I struggle to get up in the morng, I look in the mirror, and I say, 'Cohen, can't you lighten up for chrissakes?'" -Leonard Cohen in #Miami

Gwen Filosa ‏@KeyWestGwen 18h
MIAMI- Sharon Robinson is singing "Alexandra Leaving." Leonard Cohen is giving her the spotlight. All is right in the world. 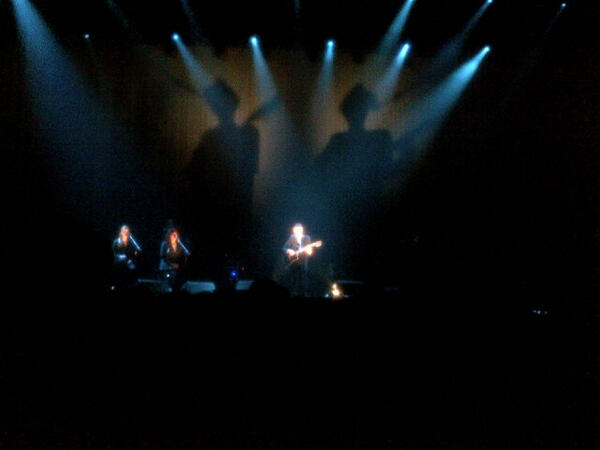 Joan Cochran ‏@WordsByJoan 19h
At leonard cohen concert in miami with old hippies and poets. Some things get better with age.

Stephanie Owitz Stephanie Owitz ‏@stephanieowitz 19h
Couldn't be any happier ... Because I am at the Leonard Cohen concert in Miami! Still in love after all these years !

Gwen Filosa ‏@KeyWestGwen 20h
Leonard Cohen in Miami: "I look in the mirror and say, 'When are you going to lighten up, Cohen?" Intro to "There ain't no cure for love."

And what a show it was! I wasn't sure what to expect from this Miami crowd. There had been virtually no chatter on the forum about Miami so I wasn't sure if this was a popular destination or not. Since this is my stomping ground, I was so hoping that the local flora and fauna-poets and hippies- and other assorted South Floridians would be up to par with some of the other venues I have attended. As it turned out, the Miami audience was super. Leonard and company started about 15 minutes past 8. I'm not sure, but I believe it was because there had just been a bit of bad weather and many people found themselves stuck in traffic. For a long time! They opened with Dance Me to the End of Love, of course and went on to give us 3 hours and 15 minutes of pure perfection.

)so my experience is limited, but it seemed like the whole band was in high spirits. Leonard said he plans on taking up smoking again in 2 years and then proceeded with a detailed scenario of how his first cigarette would arrive -- very funny- and then segued into his stage version of 'Anyhow'. During the recitation of 'A Thousand Kisses Deep', the audience held their collective breath and listened with reverence to every syllable. I could listen to that poem in his voice a thousand times and never tire of it. He continued his antics with Tower of Song.

I don't have the brain power to keep track of the set list, but I can say they played Lover, Lover, Lover - one of my favorites, Closing Time- My husband's very favorite, Famous Blue Raincoat..........and on and on.

Sharon got a well deserved standing ovation for 'Alexandra Leaving', as did the Webb Sisters for 'If it be Your Will'. All in all it was perfect.
By the end of the second set everyone in our row, we had front row girls side (again

) we were all swaying in time, clapping and softly singing along with the chorus. As the first encore began, the aisles filled with people standing-lots of young people-applauding and just enjoying every song. As Leonard left the stage after the final encore, he stopped for an extra moment or two,gazed into the audience and with a really beautiful smile he tipped his hat and seemed to say an extra 'Thank you' to a very enthusiastic crowd.

So, there you go. My first official concert review. All from the heart. (and just a bit disjointed--I know)
Barbara
we are so lightly here
it is in love that we are born--in love we disappear Thank you for the sweet review, Hydrogal.
Very dear friends of ours, who went with us to LC's concerts in Montreal, San Jose and Vegas, were at the Miami concert last night.
Wish I could have been there with them. I'll forward them the link to this thread.
Top And - a video uploaded by plisplaiet - Thanks!
It's not complete - but it's sweet -

Another nice video - uploaded by "hea ther" - Thanks!

And another partial video by plisplaiet
Thanks!

Article in MiamiNewTimes - and a set list. [There are a lot of photographs throughout - click on link to view]
http://blogs.miaminewtimes.com/crossfad ... 0_2013.php

Circa 2004, though, fate intervened. (Or rather, a personal manager did, ripping him off to the tune of approximately $9 million over a period of years.)

And that's essentially how the Canadian Jewish Buddhist bard in a suit was forced to work the tour circuit on a full-time basis again.

Of course, Cohen, a formerly reclusive figure, might have preferred to spend his unknown number of remaining years on this strange spinning rock, sitting in peace atop a California mountain with loved ones, friends, and his own flawed self while contemplating love, death, and other Old Ideas.

But he also relishes the stage life, playing up his puckish artistic persona as a poet, prophet, and pervert for the benefit of fanatics, fellow fighters, and the gods -- not to mention himself.

So, last night in Miami at about a quarter-hour past the advertised "8 p.m. sharp show time," the theater went dark. And still. And silent. And then it erupted into a standing ovation as Cohen jogged out, clad in his signature late-life uniform of gray dress shirt, black tie, black suit, and black fedora.

He briefly tipped his head in thanks, with a wide, thin-lipped smile shining through the shadow beneath the brim of his hat. He grabbed the microphone in his right hand while curling its cord into a loop with the other. And he descended to his knees, singing, "Dance Me to the End of Love," in his infamously seductive, gravelly croon, as if it were a reverently filthy prayer.

All night, as he sang, Cohen created a ritual of genuflecting in praise of his bandmates.

He bowed before the string virtuoso Javier Mas. He was humbled by Neil Larsen, "the foremost exponent of the Hammond B3." He kneeled in honor of "our timekeeper" and drummer Rafael Gayol; "the professor" and guitarist Mitch Watkins; the master violinist Alexadriu Bublitchi; "the sublime" singing Webb sisters; "our musical director and survivor of these many campaigns" Roscoe Beck; and finally, his lovely longtime collaborator and co-writer, Sharon Robinson.

But just as often, Leonard sat crouched in the spotlight, staring off into the beyond, trying to decipher the darkness, attempting to channel its mysteries.

"We were here a few years ago," Cohen uttered in his distinct careful way, addressing the theater and referring to the Miami stop of his two-year 2008-09 world tour, which had been his first in over a decade and a half.

"And maybe we'll be here a few years hence. One never knows for sure," he joked, darkly. "But tonight, we'll give you everything we've got.

"Thank you, friends, for the warm welcome."

He glimpsed "The Future," singing a string of slightly altered lyrics, "There'll be phantoms/There'll be fires on the road/And the white girls dancing," as the Webb Sisters (but not the darker-skinned Ms. Robinson) swung their arms in a pantomime of the Mashed Potato.

He tunefully recited "Bird on the Wire" and smirkingly conceded "Everybody Knows" before removing his hat to admire a four-minute flamenco-tinged guitar interlude from Mr. Mas.

He interrogated the universe, asking "Who by Fire," while tenderly plucking at the strings of a black, full-bodied acoustic as his own enormous, double shadow loomingly shuffled across pleated 100-foot curtains.

Cohen danced amid "The Darkness," during which he performed a strange vocal trick, grumbling percussively as the drummer, "our metronome," slapped out a jazzy solo.

He was clearly enjoying himself. "Thanks so much, friends," he said. "It's a great honor to play for you." And straightening his tie, the old songman smiled again.

Despite his gloomy reputation, pitch-black sense of humor, and a death fixation that's only been exacerbated by his age, Cohen is still a charmer. There is a purity about his pessimism. And he would rather laugh in the face of the reaper than weep. And he will always repent for his sins, even if he enjoyed committing them.

Yes, he is a septuagenarian. But he remains boyish. He jokes. He teases. He self-deprecates.

"Sometimes, I struggle out of bed," he confessed last night. "And I go to the mirror and I look into that mirror and say: 'Lighten up, Cohen.'

Pausing for laughs, he continued chastising himself. "'Your struggle has been intense. But intense compared to what? When are you going to get over the fact that there ain't no cure for love?'"

Yet in spite of "struggl[ing] out of bed," Cohen slips so spritely around the stage. And he performs for hours. There is an intermission. A second act to the show. And three encores.

The old songman moves promiscuously from instrument to instrument too. He caresses the microphone with both hands, singing or whispering spiritual, sarcastic, and occasionally explicit lyrics. He fondles the guitar. He twangs the Jew's harp. He even fingers the electronic keyboard a bit.

"I'm going to fire this machine up," he warned the theater, standing behind a fine piece of Casio-like plastic gear. "Don't get alarmed. You may never have seen anything quite like it. So steel yourself."

Still, though, the main source of Cohen's own amusement and inspiration (and perhaps existential terror) is death.

"Are you humoring me? Patronizing the elderly? Do you think that's all I can do?" he jokingly ranted in response to the theater's applause for his electronic keyboard playing, as if defending himself against some sort of judgmental higher power.

He's even rewritten the come-ons in "I'm Your Man," crooning: "I'll wear an old man's mask for you."

In a certain way, all of Cohen's routines (especially the encores) are laid out in little life-death cycles. From the lusty hymn "Hallelujah" followed by the surreal goodbye of "Take This Waltz." Or the idyllic ode "Marianne" giving way to the apocalyptic disco of "First We Take Manhattan." Or the seething domestic drama of "Famous Blue Raincoat" sweeping into the submissive spiritual "If It Be Your Will" and then the joyously apocalyptic tune "Closing Time."

As he croons on his song of the same name, it's all about "Going home/Without my sorrow/Going home/Sometime tomorrow." This "lazy bastard living in a suit ... Going home/To where it's better/Than before."

Yet every time Cohen introduces his band one last time and bids his fine audience goodnight and skips with a hand fluttering over his head, waving comically as he rushes headlong into the wings, into the darkness -- the old trickster is never gone for good.

He always seems to return for another encore.

The concert in Miami on March 20, 2013 was a truly a life experience for me. People of all ages, shapes and colors melded into one as we were transfixed by Leonard, his being, his poetry and his humility. It was overwhelming in it's simplicity. Thank you for the experience, I will never forget it.

I am so envious of all you guys...we missed this concert in Miami last year because our RV was having transmission issues, and it spent most of it's time in the shop

Oh well, maybe next time we will be fortunate to enjoy Leonard's genius.