To summarize: Please Come Back Leonard!
To summarize some more: I can die happy now.

I think this time through he was even better than 3-4 years ago. The audience was really into it. I got what I wanted, Democracy and Lover, Lover, Lover. Two of my favorites that he didn't do last time through. We also got Famous Blue Raincoat as part of the encores. I was concerned about that since recent concert report playlists have omitted that. I'd even say he was in better voice tonight than he was his last Tampa concert.

If he comes again when he's 82 years old I'll see him. I see no reason why he couldn't. He's still in great shape and his mind is incredible. He thanked his entire concert crew from memory. Very generous with both his band and the time given to the audience.

When you get to see your hero and your hero exceeds expectations you are blessed.

The show was very similar to last go round, with selections from Old Ideas, Democracy and Lover, Lover, Lover replacing as far as I remember Chelsea Hotel #2, Gypsy Wife and The Partisan. Alexandra Leaving rather than Boogie Street for Sharon. I think the songs from Old Ideas are better live than they are on the cd.

Merchandising was packed from the moment the doors opened.

I have a Tampa friend who was in attendance last night. She said:
"Music is my career and I have been to many concerts, but this is in a level that transcends even words to describe, except.... AMAZING!"
Top

No set list or review - yet - but here are some pictures from Leonard's show last night's show at the Straz in Tampa, Florida -
From Joey Carenza - Notes From The Road
http://leonardcohen.tumblr.com/post/457 ... -gypsy-boy some kind of gypsy boy … As best as I can tell the set list was the same as the 2nd Oakland show minus encore 3.

Encore 2:
Famous Blue Raincoat
If It Be Your Will (Webb Sisters)
Closing time
Top

Video uploaded by Tiffany Schilling - Thanks! 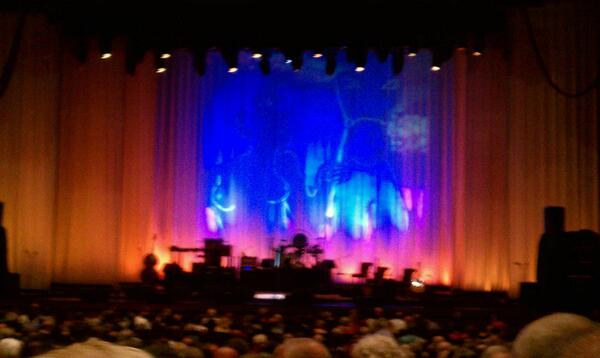 ‏@gregsbaker Got taken to school on being passionate about one's craft last night. Leonard Cohen did 3.5 hours at 78 yrs. Fantastic, inspirational. #fb

@steverovner The incomparable Leonard Cohen at the Straz Center. http://instagr.am/p/XBWabOBmMm/

‏@tbtsoundcheck From tonight: A better shot of the dapper #LeonardCohen at the @StrazCenter in Tampa. http://instagr.am/p/XB1eLKSazP/ 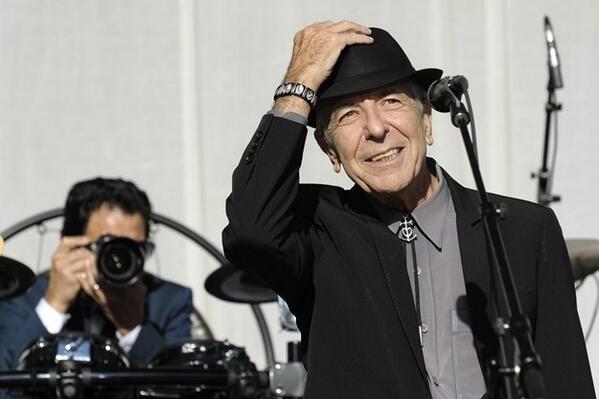 No matter how high your expectations were,, you could not have been disappointed.

It's hard to know where to begin praising this show. Cohen performed beautiful renditions of songs from all stages of his 46-year recording career, from "Suzanne" and "So Long, Marianne" through "The Future" and on to ""Anyhow" form his current album, "Old Ideas." His beautiful gravelly voice was still intact, and still full of music, and he looked so fit and moved so spryly that it rendered all the talk of his age irrelevant.

He was also utterly charming, reverentially introducing each member of his nine-piece band several times, and even naming the lighting designer and technicians and the guy running the sound board. (The lighting and the sound were, in fact phenomenal, but not many musicians would have bothered to acknowledge them from stage.)

Leonard Cohen at the Straz on Monday

His band, including former Sarasota Neil Larsen on keyboards, was sublime. Some of the most moving moments of the evening came from three backing singers. Longtime Cohen collaborator Sharon Robinson, performed a gorgeous song titled "Alexandra Leaving" and the the Webb Sisters took up instruments -- Hattie on harp and Charley on guitar -- and treated the audience to some chillingly beautiful two-part harmonies.

I could on and on, but I'll just say it was as close to perfect as a concert could get and leave it at that.


Leonard Cohen Unleashes Odyssey of His Work at the Straz

Cohen performs Dance Me To The End of Love on Monday night. EDMUND D. FOUNTAIN | Times

TAMPA — When Leonard Cohen released Various Positions in 1984, the top five songs in the nation belonged to Hall and Oates, Chaka Kahn, Cyndi Lauper, Duran Duran and Wham!. So you can see how the album's centerpiece, a five-minute ballad simmering with religious symbolism and heartache, failed to make a splash.

But time was kind to the Canadian icon, and over the next 30 years, Hallelujah became one of the world's most acclaimed and adored songs. It has been covered by more than 300 artists, from Bob Dylan to Bono to Adam Sandler.

But if Hallelujah's legacy has eclipsed that of its creator, you'd never know it from Cohen's concert on Monday at the Straz Center in Tampa. Hallelujah was but one high of many during a nearly 3-1/2-hour odyssey of gospel blues and devastating poetry, delivered with deep love and dry wit. By the end, the near-capacity crowd of 2,411 felt as if they'd just been read a novel or three, with the author's deathbed baritone still rumbling in their ears.

At 78, Cohen seems immune to the mandates of a go-go-go culture. Each of his 28 songs felt unhurried, with even his jauntiest numbers — Everybody Knows, Ain't No Cure For Love, First We Take Manhattan — meandering at their own unfussy pace.

And yet there is plenty of life left in Cohen's bony frame. All night, he skipped and skulked and dropped to his knees more often than any septuagenarian should, cutting a dapper, mischievous figure at center stage.

His strength as a songwriter is drawing you out of your time and into his, blending back-alley jazz (Bird on the Wire), sold-my-soul blues (Darkness) and heart-rending cheek-to-cheek ballads (Famous Blue Raincoat, Show Me the Place) into a singular soundtrack to an era long since lost. Everybody Knows was a bouncy Parisian story-song with unlikely disco bones, while I'm Your Man was a saucy, salty cabaret come-on.

His voice, a beyond-the-grave grumble with limited range to begin with, has aged about as well as you'd expect — but Cohen has compensated by writing songs that suit it. Cuts from 2012's Old Ideas, like the loping, redemptive Amen, felt as classic as his classics. A particular highlight: The darkly clever Going Home, which imagined a smirking Creator laying into Cohen the cocky artiste ("He's a lazy bastard living in a suit" trying to write "a manual for living with defeat").

So great was Cohen's band that he rarely co-opted the spotlight entirely for himself (though when he did — the sparse Suzanne, the noir poem A Thousand Kisses Deep — it was breathtaking). Instead, Cohen twice handed lead vocal duties to his backup singers: to songwriting collaborator Sharon Robinson for a tear-jerking Alexandra Leaving, and again to harp-strumming duo the Webb Sisters on If It Be Your Will.

It is telling that these two songs, which Cohen wrote and others sang, were among the night's highest, holiest moments — telling, of course, because when he finally got around to Hallelujah, it took a second to register what we all were hearing. Cohen's Hallelujah has never been the most beloved version — that honor probably belongs to the late Jeff Buckley — but it remains his own, coursing with fluttering mandolins and the heavenly heft of a Hammond B3.

During each chorus, the lights above the stage shone outward to illuminate the audience, and there were chills in the air when, for the final reprise, Cohen kneeled and tilted his head to the heavens, just high enough for the crowd to see his shuttered eyes. The song clocked in at 7 minutes and 23 seconds, and was worth every blessed second.

Cohen doesn't need Hallelujah to be remembered; his place in music's promised land is secure. Even if he's in no rush to get there.

Here's the set list for this show - as posted at Setlist.fm
(thanks to Zwrirnie) -
http://www.setlist.fm/setlist/leonard-c ... 8be1f.html


First Set
Dance Me to the End of Love
The Future
Bird on the Wire
Everybody Knows
Who by Fire
Darkness
Ain't No Cure for Love
Amen
Come Healing
Democracy
A Thousand Kisses Deep
(recitation)
Anthem
Second Set
Tower of Song
Suzanne
Waiting for the Miracle
Anyhow
Lover Lover Lover
Alexandra Leaving
(performed by Sharon Robinson)
I'm Your Man
Hallelujah
Take This Waltz
Encore:
So Long, Marianne
Going Home
First We Take Manhattan
Encore 2:
Famous Blue Raincoat
If It Be Your Will
(performed by the Webb Sisters)
Closing Time

This holy trinity (three theological virtues) is one of the most ancient Christian symbol.


I like this pic among so many others because of the fun in his eyes, pleasure and joy, and happiness - contentment - in the face, and also there is a picture taking from the other side also at the same time. A lot of symbols in this.

Thanks to everybody who are sharing concert experiences (here and in other threads!) So great!!!!

Last edited by Tchocolatl on Thu Mar 21, 2013 4:11 pm, edited 1 time in total.
***
"He can love the shape of human beings, the fine and twisted shapes of the heart. It is good to have among us such men, such balancing monsters of love."

The setlist has already been posted in this thread by Inspector Javert - see above. Thank you dear Inspector!

As an aside, setlist.fm has proved to be particularly unreliable so far this year so can I make a plea for all concert attenders to post the setlists, either in the Concert Report thread or in the setlists thread (I'm sure one of the mods will copy across to the setlists thread as necessary).

This holy trinity (three theological virtues) is one of the most ancient Christian symbol.


Does anyone know when this picture was taken, was it really on Monday?
this cross is the embleme of Camargue, which is the region that goes from Nimes to the Mediterranean in France http://www.saintesmaries.com/en/home/sh ... cross.html
I had bought my pendant in Nimes when I went to see LC and the band in 2009, not knowing LC would have one day the same one...
Top

It looks to me that this photo was taken outside. Other than it being a fantastic photo of Leonard I love what Rafael is doing in the background

LC&LC wrote:Does anyone know when this picture was taken, was it really on Monday?
this cross is the embleme of Camargue, which is the region that goes from Nimes to the Mediterranean in France http://www.saintesmaries.com/en/home/sh ... cross.html
I had bought my pendant in Nimes when I went to see LC and the band in 2009, not knowing LC would have one day the same one...

Leonard often wears a square pin (or whatever they're called) with "Camargue" at the top of it. This photo is from the second Montreal concert at the Bell Centre on November 29. 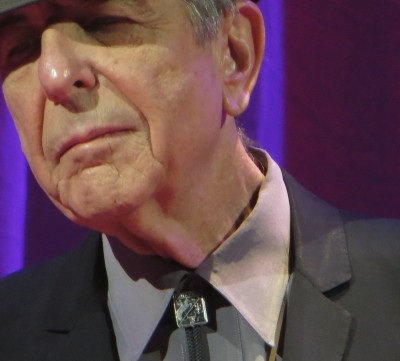