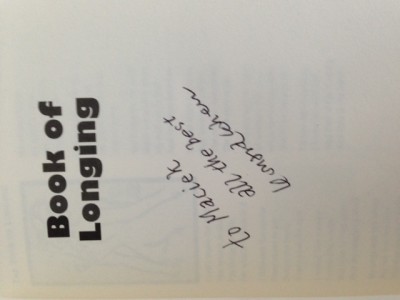 Ivan,  you were really lucky to meet Leonard Cohen in the hotel lobby...he was a very rare sight there as he used the back exit (directly to the underground parking) most of the time. I stayed at andel's hotel between 19 and 20 July. I always choose this one while in Łódź and having arrived there, I saw some people from the crew, so I thought that Leonard would also be somewhere around.I waited for about 1.5 h at the reception but it seemed he had already gone to the soundcheck. I didn't wait at the Arena as it's too big for that and the backstage doors are always well protected. After the concert I sat for some time at the hotel bar (it was quite crowded) but I was pretty sure he wouldn't enter through the main door. On the next day I was a bit tired after the concert which I found absolutely amazing...I couldn't believe I heard so many of my favourite songs live. I was so concentrated on my memories from that exciting event that I stopped thinking about trying to get an autograph. However, as I was having breakfast, I saw someone very familiar walk beside me. I couldn't believe my eyes, it was Leonard Cohen...and I had "The Book of Longing" in my bag! (somehow I forgot to put it into the luggage as I did with the program). I wasn't sure if it was particularly polite to approach him in such a private moment, but I saw other people greeting him and shaking hands so I thought he would't mind. He was very kind, even talked to me for a while and I got his autogtaph. If you had waited at the hotel between 8.30 and 9 am on Saturday, you would have seen him

PS It's great that there are some young fans of Leonard Cohen's music. I don't know many of them.personally (I'm 21)
PS2 As for buying tickets on the internet, maybe you chose the wrong website. I bought them on the promoter's site and was able to get the front row for the same price as you paid
Top

The Master has paid a tribute to late Maciej Zembaty, who introduced Him to Poland back in the seventies, translated all His songs lyrics, many poems and a novel “Favourite Game” into Polish.
He sung beautifully His songs in Polish, and was our “Cohen guru” back then.

I'm glad I met you, Ivan. I remember every sentence you have spoken to us before the show. Everything that you wrote here I remember from your story in Lodz. It's a wonderful story. I very much am moved - now and then. Just look at the picture below 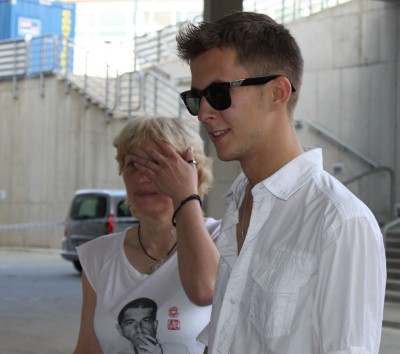 We love you, Ivan 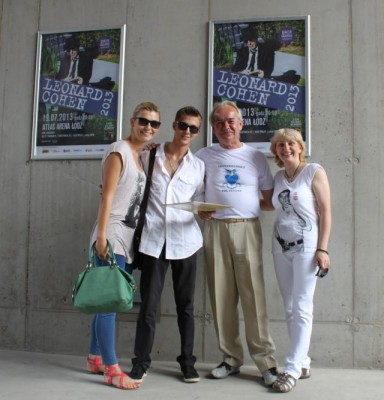 Kasia, Ivan, Mark (my brother) and me 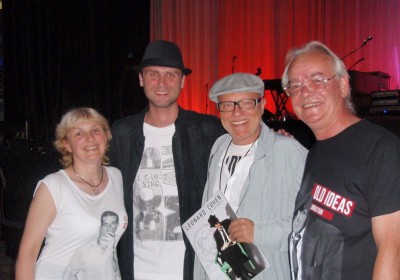 Welcoming LC in the lobby by the hotel team in Lodz

Thank You Master for all your poetry, music, songs and wisdom ...

Ivan.Tereshko wrote:"...Like the blessing comes from heaven
For something like a second
I was healed and my heart was at ease" - I believe I'm not the only person who feels the same way after the concert

Hallo Ivan
You're very very lucky indeed!
So you know the Feeling, when you're "touched", when your Heart seems to break out of your chest....
Take this Treasures with you for all of your Life; as Leonard says: "we don't know, if we ever meet again"...
And we don't know, what will Happening...
I'm especially glad, when I did see some Young Faces on this Side!
So I wish you all the best (and that your Music will be heared around the World, who knows?)..
I would love to see the Concert in Lodz too, but I was lucky enough, to see a view and had two more to go...
But Moments like this are very Special, very emotional. That's why they are so Special and rare in our Lifes, so keep'em forever...
All the Best

Bye the way: how did you know about Leonards Music and Poetry?
Uwe, Swittzerland
Top

Right after coming back from work on July 22, 2013, something unexpected and pleasant happened to me. Before I attended to my tasks, I turned to my boss to thank him for the 3 days off (which is quite a challenge in the middle of the season in a sea resort), and as a token of my appreciation, I gave him an Old Ideas CD which I bought on the Arena in Łódź. It wouldn't have been anything out of ordinary if not for my boss's truly fantastic reaction. He instantly asked the hotel staff to turn our audio equipment on and personally inserted the CD thus filling the whole hotel with Leonard's voice... Several times : ) And who would have thought that I'd spend my first day back at work still together with LC, with no necessity of coming down to earth.

Still on the same day, before LC's songs reverberated in the hotel's loudspeakers, the guests showed interest in my short absence at work. One of the ladies (a German citizen) who was unobtrusively inquisitive, asked me directly
“Where have you been, Beata?”
“At a concert”, I replied.
“Whose concert, if I may ask?”
“Leonard Cohen's”.
When she heard the name, the woman (about 50 years old) quietly groaned, let out a long sigh and... fell silent. She freezed. She turned pale. Now she in turn aroused my interest as well as concern. I could not find a straightforward interpretation to her reaction: was it good? bad?, I thought. She looked as if she was about to faint. Therefore I asked her: “Are you alright, did anything happen?” After a longer pause, she replied with a tint of embarrassment,
“Please excuse me, I was rendered speechless; I'm bewildered. When you mentioned the name of that extraordinary artist, I shivered. Please, look”, she said and showed me her body, all covered in goosebumps. And then she added in a calmer voice, with her face brightened and rosy cheeks:
“You can't even imagine how much I envy you...”
And with a blissful, intriguing smile, she returned to her room.

On July 19, 2013, we were waiting outside the Arena. I was with Marek – my brother – he "introduced me" to LC when I was only 11. And I remained faithful to the Master, probably for my whole life. I really wanted to meet the Master, only this once, face to face. That was why we enthusiastically circled the Atlas Arena many times. Some buses arrived before the soundcheck , but the area was well guarded by the security staff. In one of the buses came Sharon Robinson, I spotted her at the last moment, but I was too far. She disappeared in the Arena entrance. 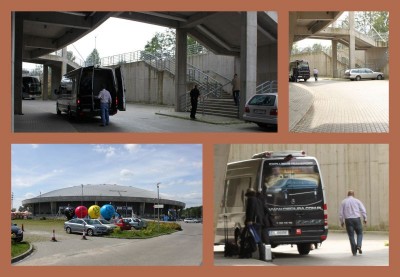 We kept asking, but nobody wanted to "spill the beans". Some said that he'd been inside for over an hour now, others that he wiould arrive last. The bus driver who had brought the band, and the security told us that they wouldn't help us in fear of losing their jobs. That was perfectly understandable. And we are not pushy people But we had a whim of being lucky : ) At some distance from us I noticed a fan from Poland (known on the forum as Kaz), who was so absorbed into staring at the Arena entrance, that our encouragement to come down to us didn't work. Armed with his camera, Kaz was bravely "fighting" from the distance. Whether he succeeded or not, I don't know, but the security were efficient people, as can be seen above : )

Well, it should've been so easy, here, home, on Polish grounds, that all you have to do is wait...

Thanks to our walking, we met some very interesting young people – Kasia and Ivan. Ivan from Belarus! Talented, intelligent and modest : ) with LC's vinyl record held tight in his hand. Ivan showed us his recordings on YouTube (on his phone). He's a really interesting artist and a young singer. We'll probably be all hearing about him some time! : ) 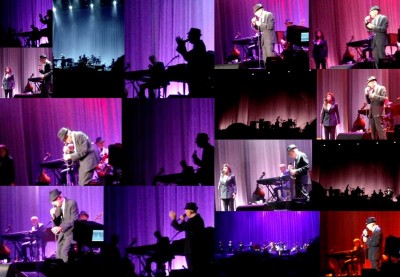 I will not be repeating all those adjectives we use here to express our admiration and delight at the Master's art, the Band and this WONDROUS PHENOMENON Leonard's concerts are. OBVIOUSLY...

Right after the concert we drove to Hotel L-andel`s. Ha! We drove... We got stuck in the jam of cars leaving the Arena. The way which usually takes 10 mins, took us over half an hour. As you may suspect, it was too late. The Master had already adjourned to his room (as we managed to establish

. But we stayed there to feed on hope. After all, the Master could be coming down for a cup of evening tea. Or anything else for that matter... We sat in a room with glass walls, where the Master stayed the evening before (a little birdie told us

. We could see the reception desk and the whole foyer. We drank red wine and kept staring... 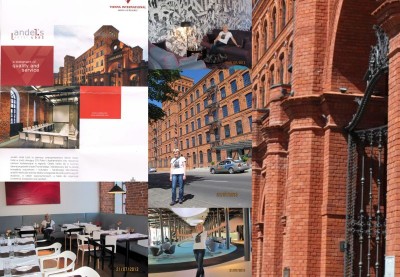 Well, we had to satisfy our hunger with hope only. It was 2.30 a.m., we went back to our hotel. Sleeping was out of the question, the emotions from the Arena were still too vivid. Those glorious, unforgettable 4 hours of joy!

Well, I did not shake Mr Cohen's hand, didn't look deep into his eyes and did not tell him the words I've been intending to for such a long time, although I dream about it at night... But the happiness which lifts me off the ground every day, when I realise how lucky I was to participate in the concerts of this great, perfect world tournee (2008, 2010, 2013) and what an honour it is to be one of You, one of us... the ones loving LC; that happiness doesn't leave me and I hope it never will, unlike this opportunity which "slipped through my fingers"... 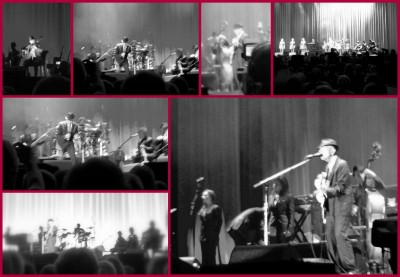 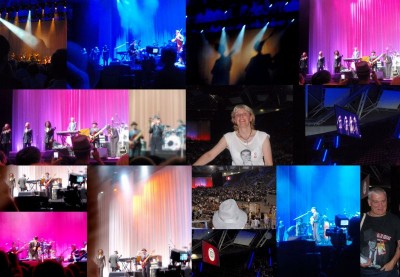 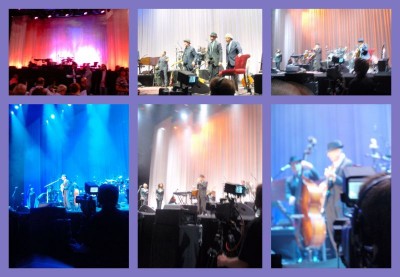 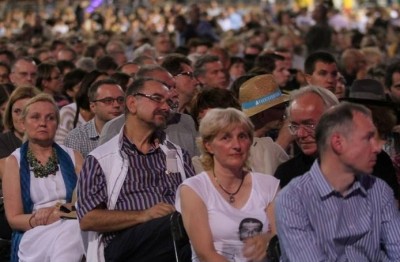 Oh yes, it was the wonderful, unique performance, the great event, I waited with bated breath... And I wasn't disappointed - it was a fantastic experience, really unforgettable. I am waiting for a next concert tour in Europe and concert in Poland!
kosmetyki do salonów kosmetycznych, garderoba białystok, akcesoria weber,
Top
Post Reply
53 posts