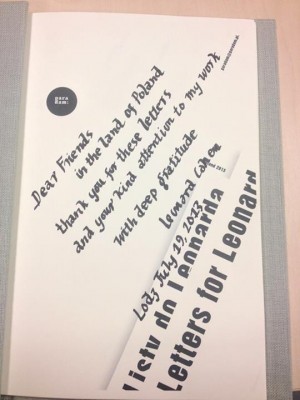 All touching letters sent by Polish fans in concert anticipation to the organising agency Paradam, collected in the special album, have been handed to Mr Leonard Cohen on the concert day. Obviously he was fond of us

Set List as reported by martali in Setlists thread -

I tried to Leave You
Save The Last Dance For Me 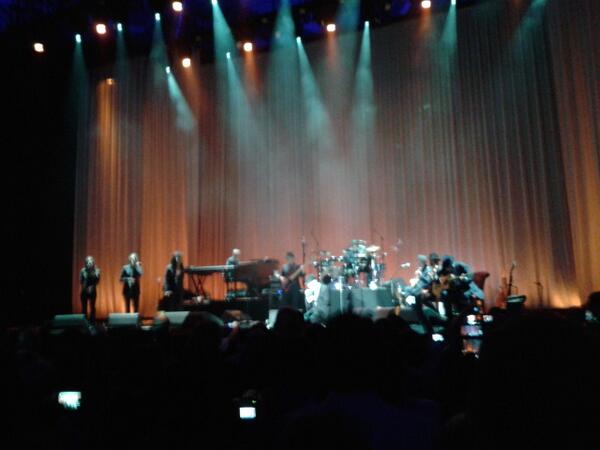 The #best #performance in #my #life #leonardcohen in #poland
Top Lighten Up Your Łódź If It Be Your Will
http://www.youtube.com/watch?v=X98YaBpyNmk

After every previous Leonard`s concert I saw,I was saying:"it was the best concert I`ve ever seen".I can say the same
about yesterday evening.Leonard was amazing,full of energy,relaxed,his voice was very strong.His band was in top form
also-especially ladies.The audience was great,full of enthusiasm,everybody was in seats from the beginning,they weren`t
wandering around with beer or food and gave Him rapturous standing ovations.
Before Tower of Songs Leonard paid tribute to Maciek Zembaty http://en.wikipedia.org/wiki/Maciej_Zembaty who passed
away 2 years ago.He said that what Maciek did for Him and for Polish fans was very important.
Last edited by kaz on Sat Jul 20, 2013 6:57 pm, edited 1 time in total.
1985:Zabrze 2008:Dublin x 2 /London O2/Praha/Wroclaw/
2009:Bratislava/2010:Katowice/Bratislava./2013:Lodz/Vienna
Top

Dance Me To The End Of Love (
http://www.youtube.com/watch?v=8sN9byGHOpg

Greeted with great enthusiasm all over the world a Canadian singer and poet Leonard Cohen appeared at a concert in Poland. The artist played in the Atlas Arena in Lodz. His show was a great opportunity to see the moving legend, causing huge excitement and an emotional show.

This is a very modest man - says Agnieszka Klotryga of Paradam Agency, that invited the Polish Canadian bard. There is no special limo ride with the whole team. (...) He trusts people and people appreciate it and give it their all. Just as he gives his all - whether to the public or to the co-organizer of the concert adds.

After a nearly six decades of his career, during which he performed in halls filled to capacity in the remotest corners of the world, the writer, poet, troubadour and extremely influential artist, once again gathers crowds of fans at concerts. There is no other artist who could seduce the audience, as Leonard Cohen - wrote the Financial Times. his reputation used to be glad for developers able to seduce any woman, today, at the age of 78 years used his talent to other purposes, throwing the audience to their feet around the world - read the article.

Career of the much loved and appreciated all over the world artist began in the '60s, and the rookie has been recognized as one of the most influential artists of this era. CD "Songs of Leonard Cohen" (1967), "Songs of Love and Hate" (1970) and "I'm Your Man" (1990), "The Future" (1992), "Ten New Songs" (2001) and "Dear Heather" (2004) still enjoy great success. Also appreciated is the literature to Cohen, which has earned him numerous awards around the world.

His works have been covered with great success by other artists. From "Suzanne" by Judy Collins, the extraordinary version of "Hallelujah" by Jeff Buckley. Experts have calculated that there are over 1300 performances Cohen's songs, recorded by other artists. Among his most ardent fans include m.in U2, REM, Sting and Nick Cave.

Dance Me To The End Of Love & The Future
http://www.youtube.com/watch?v=WBKeUnZmwxA

Bird On The Wire & Everybody Knows
http://www.youtube.com/watch?v=o99tI-6tLo0

Who By Fire & Darkness
http://www.youtube.com/watch?v=_uAZCos8LbY

Some media - and some Google translations -

On stage at Atlas Arena Cohen will be accompanied by musicians from years associated with the musical director and singing bassist Roscoe Beck, Neil Larsen, pianist, violinist Alexandru Moldovan Bublitch, Spanish guitarist Javier Mas, who in his instrumentation is also archilaud and bandurria, second guitarist Mitch Watkin, drummer Rafael Gayol and harmonica player Mike Scoble. Thanks to the duo The Webb Sisters there is no lack of women's voices. Membership is extended to singing pianist Sharon Robinson, who, like Larsen participated in the recording of "Old Ideas".

Organizers Cohen concert in Lodz do not want to reveal the hotel where they will stop. It is known that the concert will will be one night ..

Boat authorities sent a call for artists, according to his will, for breakfast, lunch, dinner or a cup of coffee before the concert.

So far, no response. Remember, however, that this year the artist over 79 years.

There are many photos at links below:

Leonard Cohen, the legendary Canadian bard and poet, on Thursday afternoon landed at Lodz airport. On Friday evening, the artist will perform at Atlas Arena. This will be his only concert in Poland.
<2/7>
(© Luke Kasprzak)

Last time Leonard Cohen was in Poland was in 2010. Now he's back, but with the material collected on a new, great album "Old Ideas", published in 2012, after eight years of absence. In Lodz, the artist will perform for the first time. The magic of his music will seduce the Atlas Arena. Full of poetry and metaphysics, the concert will be attended by about 10,000 enthusiasts of Leonard Cohen.

How old ideas and musical ideas were on the new album?