Are ticket prices too high?

- yup! And what a glorious concert it was! Just found my old post from 2009, which was again a reply to you:

Hey, we are talking about prices of concert tickets – not bread prices.

Some of you stated in the forum ticket prices were too high. That there was a moral imperative of companies involved and the artists themselves to offer tickets at a certain lower price.
I didn´t like these demands and opened this thread arguing that organizers were free/should be free in setting any price they want, while possible customers were free to buy or not.

This led – probably necessarily – into a political discussion.
In the end it´s about which economic system you want – and which system you think will work out well.
Nothing against a serious discussion about social systems, but this forum is not the place for it.

Our arguments grew too sharp – well understandably with such a vital theme.

I hold up all I have said, but do not want to defend it again.
I think we made our different points clear and could stop this here.

We are united in liking Mr Cohen´s art.

Obviously in all other matters there will be many different opinions among forum members – which is fine with me.
A liberal will always defend different ways of the others – as long as liberty is not harmed.

I saw the Who at the Concert for Bangladesh at the Oval in 1971. Amazing concert. And there was a time in the early 70's when Eric Clapton seemed to pop up at everyone's gig. I remember seeing Little Stevie Wonder at the Odeon in Streatham in the early 70's and Eric Clapton popped up from the audience and starting jamming. Happy days

Do I think the ticket prices are high? Yes. (This is my opinion based on the fact that I'm a student basically living off of my scholarship, and I'm not in an economical position where I can buy tickets the moment they are on sale; I have to save for months to afford, and if I'm lucky, there are still tickets left. I do realize that Leonard's concerts usually last twice as long as most other concerts. Seen from that perspective, I do not think the price is too high. But, again, seen in the light of my personal economical situation, they are expensive for me.)

Do I think it's worth it? Yes. The concert I attended in Halden last year, was nothing other than amazing, I really had a great time, and it lasted four hours. It was truly amazing, and I never for a second thought that the price was not worth it.
2012: Fredriksten Fortress, Halden, Norway
Top

Seats in the first rows in Pula (vip parterre) are 59 euros - 440 in Croatian currency (kuna).

Here are the prices for Ljubljana July 25 2013, from local promoter: 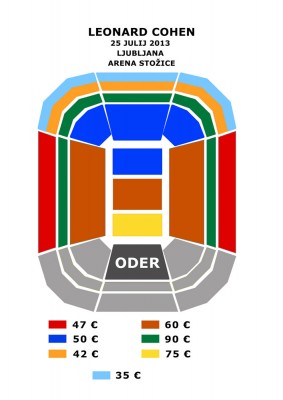 jarkko wrote: Remember that the ticket prices are always defined by the local promoter!

Well, that's true to a point, although my experience has always been that ticket prices are proposed by the promoter, but have to be agreed by the tour management company, and there is often a negotiation around this.... and it then forms part of the contract....
you may be right, I may be crazy.... but it just may be a lunatic you're looking for...

I am having a bit of a grin at the moment about some folks on the VIENNA ( July 27), PRESALE NOW thread.

Seems that the prices are proving too high for some, bizarrely I can remember reading something along the lines of "Well if you want to see L.C enough, you will pay whatever price" Well as some of us have already posted, there comes a time when one simply has to say enough is enough and look back at what once was. It's no good pointing out places in countries where ticket prices are low to someone who lives where we do in the North West of France, where trying to travel basically anywhere out of France is not only expensive but often will take a long time to reach anywhere and the same can no doubt be said for many others and from many other places. They are cheap for a reason, just as they are dear for a reason and the main reason for high prices is that word again.......greed!
I guess it all started for me sometime around Christmas 1967 and now, goodness me, it's.........2018 and over fifty years later.
No one ever listens to me. I might as well be a Leonard Cohen record.
Neil from The Young Ones
Top

It's Stadhalle, and in Vienna, for God's sake.

While Ljubljana and Zagreb (and Belgrade in 2009) are cheapest. Those are also countries where expenses are not so high, and audience has lower standard, so the prices are high for the local people, if aren't for people from the west.

The count is very easy, it depends on the hall (e.g. if Leonard performed in city hall of Zagreb, instead of Arena Zagreb in 2010, ticket would be ore than 200 Euros because of costs, small hall, etc. while in Arena was 60 Euros first row and 35 Euros the ring.)

Why did I know that someone would bring up the costs of cheaper tickets and stand up for why tickets are dearer.

Sorry it doesn't sit well with you what I said but to me, quite honestly seeing LC in Brighton as it once was, would make me far happier than travelling all the way to "For gods sake, it's Stadhalle and Vienna" and all the costs that implies.

Ticket prices are not just reliant and priced against the costs of hiring places and in which country, it is just as much about how much money the promoters and management can get out of the place and the country they are playing in.
Last edited by Vicomte on Wed Feb 27, 2013 7:37 pm, edited 1 time in total.
I guess it all started for me sometime around Christmas 1967 and now, goodness me, it's.........2018 and over fifty years later.
No one ever listens to me. I might as well be a Leonard Cohen record.
Neil from The Young Ones
Top

I think the Prague tickets are the most expensive!

But what you can do if you love Leonard ...

"I love your body and your spirit and your clothes"

Well luckily I personally don't love any performer. I like many others have my likes and favourites but when it gets to such a cost that makes it totally ridiculous and that includes anyone, including LC, then as has been said by myself and others, it is time to look back and say, well it was good and thanks for the times when the adulation was nothing like as incredulous as it is today and ticket prices were sensible and dare I say, correct.
I guess it all started for me sometime around Christmas 1967 and now, goodness me, it's.........2018 and over fifty years later.
No one ever listens to me. I might as well be a Leonard Cohen record.
Neil from The Young Ones
Top

as a regular concert goer i would have to say this is a question best answered by the individual and whether they can afford the prices or not. me saying its worth it is all well and good as i have the income to buy the tickets but a person who does not might not see it that way. prices for artists with older fans tend to be dearer as their fans have more disposable income.its also down to the standard of living in various countries. low incomes = low ticket prices. its sad that concerts have become elitist in that they do disclude those with little disposable cash.
Top
Post Reply
44 posts