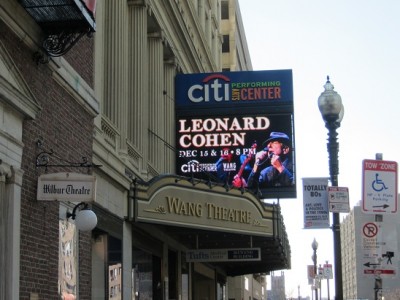 I can't wait for the show tonight! I have never seen a concert in this theater, only stand-up comedy (Craig Ferguson). Hopefully the acoustics are complimentary to his sound.

The last time Leonard Cohen played in Boston was May 28-29, 2009 - again at the Wang Theatre. The venue is called Citi Performing Arts Center and the Wang is one of two theatres at the Center.
http://bit.ly/Z99VFW

It looks - sort of gorgeous!

Another one of those wonderful restored movie theatres dating back to 1925.
In 1983, Dr. An Wang donated $Millions for its restoration. 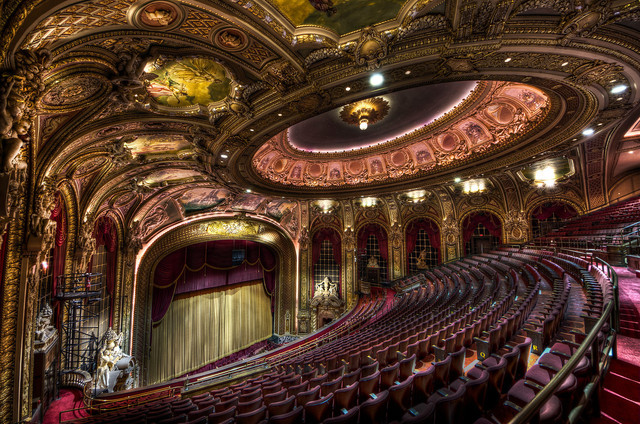 Lover Lover Lover The Wang is looking good and soundchecking even better.

Making the Marks
One must make the marks before one can hit the marks. That is after all, the hardest part.

Keep Calm Wang The band goes on at eight

It is Yours. Everything we got.

Right This Way And into the break. Tech Dan Weingartner lights the way for LC to exit the stage.

Not Gonna Climb Itself Time for the Tower.

What a change compared to all those hockey gloomy-doomy temples. In 1925 going to the movie was an event, building such cathedrales of illusions to honour dreams made of shadow and light on a screen. I like that very much, this is kitsch and hot all together. I wonder if the cameo in the ceiling represent real people.

It is so fun to follow your experiences, groupies, and your observations and feelings, from concert to concert.

I would not do this (even if I could

) but I do have a real time reading it.
Last edited by Tchocolatl on Sun Dec 16, 2012 6:42 am, edited 1 time in total.
***
"He can love the shape of human beings, the fine and twisted shapes of the heart. It is good to have among us such men, such balancing monsters of love."

I hope we get video this time - the new arrangement ...

I remember you well

I Love to Speak With Leonard

Our own on-the-spot reporter -

@apmartino Leonard Cohen is rocking it in Boston tonight.

‏@johnolore I've been to a LOT of shows in my day, but I've NEVER seen an artist give props to the rigger. Leonard Cohen is a class act all the way.

‏@johnolore Before tonight, I thought the only thing most 78-year-olds could do for 3 1/2 hours was watch the Weather Channel. Leonard Cohen's DA MAN!

Leonard was in truly sparkling form tonight! There were some interesting variations which I'm sure will be discussed at length tomorrow, but need to get some sleep now. Just one question though, to anyone who was there tonight.... what was the "chant" in Darkness? Never heard it before.

I have seen the photos and the venue looks very beautiful but the partisan is not in setlist of the last concerts!!

casaperon wrote:I have seen the photos and the venue looks very beautiful but the partisan is not in setlist of the last concerts!!

The Partisan may not mean as much to US audiences as it does to those in Europe and Canada. The Boston audience got Democracy instead, which always gets a big cheer in the US.

This is a great setlist, and yes ,Partisan might be included in Europe,especially Germany and France. 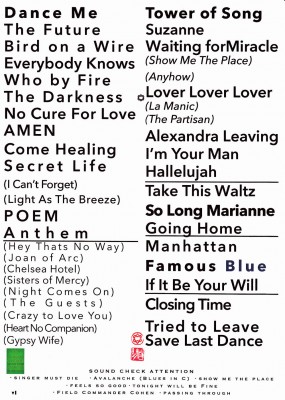 Got home from the show around 3:00am, finally rolling out of bed.

This was our second time seeing LC at the Wang, and the venue is perfect. The sound was A-MAZING. You could hear every instrument perfectly, no bleeding, every nuance was captured.

Amen - definitely my favorite performance of the show. It is my favorite track from "Old Ideas", but the arrangement just made it come alive. If there is another road sampler, this NEEDS to be on it.

A Thousand Kisses Deep- this was the only one to bring me to tears this go around. I really could listen to an entire album of Leonard recite poetry with some light accompaniment.

Democracy - LOVED the Jew's harp, the "choreography" from the ladies, and the violin.

Alexandria Leaving - holy Hell. I am not a huge fan of "Ten New Songs", but this was SO beautiful. I had a stupid argument with a friend earlier in the evening, and still felt a little annoyed in the back of my mind. Between this and "Democracy", I suddenly realized that I had been transported into another place. So sublime.

Chelsea Hotel - loved, loved, LOVED this arrangement. I'm a big fan of "full band" Leonard... but hearing this made me think, he could tour with a four piece band and still have just as much impact.

The band had a much BIGGER sound. Even songs like "Going Home", there was such a "rock" feel. I don't know if that was due to Mitch Watkins, or the band being a little more seasoned, or intentional on Roscoe's part. MANHATTAN was PHENOMENAL, it was charging along like a high speed train.

LC had some great "Leonard Speak" moments - during the first encore, before playing "Going Home", he quipped about having an angry spouse or partner waiting at home, then by all means, go, but if our lives were so empty, he welcomed us to spend a few more minutes.

Very cool introduction to Lover, Lover, Lover. Told a story about being in the military and asking what he thought was a comrade for a cigarette, only to realize it was a POW, but he couldn't tell the difference. I really thought this was leading into "There is a War", so was REALLY surprised when they broke into Lover.

Before "If it be Your Will", he made mention of the recent events which were "too deep for words" but hoped that the song would help express some of the thoughts and feelings of the audience. Was particularly poignant with the tragedy in Connecticut.

Had really hoped to hear more of the newer songs - am very interested in hearing "Anyhow" in this setting, and "Different Sides".

OH, the Darkness!!! What a STRANGE arrangement! There was in fact, some sort of scat or chant that was an interplay with the drums. I don't know if it was another language or what, but man, did they add such a PRIMAL feel to that song. It was pretty cool.

We've seen LC three times now... and there was some new folks in the audience. There was a woman sitting in front of us that was SO excited, and hearing the cries of surprise and awe coming from members around us... really added to the show.
Top

joyezekiel wrote:...what was the "chant" in Darkness? Never heard it before.

RainDog1980 wrote: LOVED the Jew's harp ... OH, the Darkness!!! What a STRANGE arrangement! There was in fact, some sort of scat or chant that was an interplay with the drums. I don't know if it was another language or what, but man, did they add such a PRIMAL feel to that song. It was pretty cool.


Leonard showed how he still can "run with Diz" ...

What I am seing in Lover Lover Lover - and this is my personal point of view, I am not saying that this is what is in the song - is a plea to come back to Spiritual Affairs (which I call Reality, or Thruth - Beauty) instead of engaging into religious wars and/or self-pity, being so self-centered (which I call being lost in delusions and uglyness). No judgment in my comment, though. Being all born in "rags of light" are we. "But if it be your will, if there is choice..."

My simple soul is fueled, phew... Thanks!
***
"He can love the shape of human beings, the fine and twisted shapes of the heart. It is good to have among us such men, such balancing monsters of love."