Concert reports, set lists, reviews, photos and You Tube links. Fan meet-ups before and after the concerts.
Post Reply
45 posts

I think it must be just about encore time in Madrid.
Voila - a Concert Report thread

The venue is Palacio de Deportes, an indoor sporting arena and according to Wikipedia the capacity is "18,000 for concerts (with standing public ramp)". Opened in 2005 to replace a replace a complex that was destroyed by a fire.

Here's a pictures from Camp Cohen - 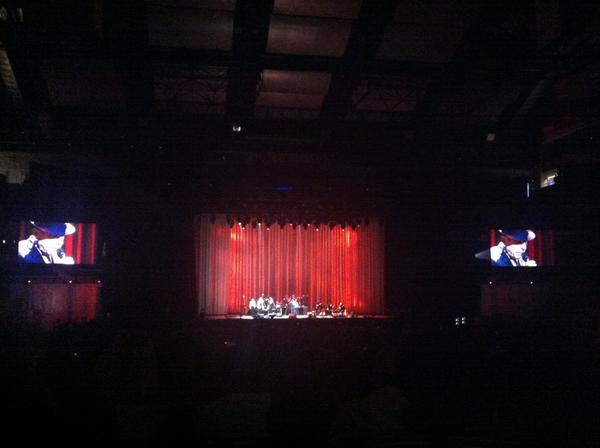 Reporting from Montse Coque at the concert: Leonard playing THE GUESTS!!

Surely we can look forward to 'Joan of Arc' soon. A Couple of Encores..
and then we’re off to Lisbon

The video's pretty shaky - but -


In The Shelter Of Your Sadness
Leonard Cohen or the poison of melancholy as a shelter against the miseries.

Leonard Cohen during his second and only concert in Spain at the Palacio de Deportes. / Bernardo Perez

Sometimes, when the days get unlucky, just an additional contribution of sadness can serve as a lever. Leonard Cohen returned to work last night, in a packed Arena, the miracle of homeopathy: the poison of melancholy as a shelter against the miseries. The teacher knows that almost all battles are lost, but upward, proud, her figure crumpled to officiate a ceremony as old as transcendental. Greatly exceeded not two quarters of a century, but three, the Borsalino hat knight charged us an important money for their valuable songs, but gave an overwhelming lesson in dignity. We walked withered, Leonardo, so we will never know how grateful we doblegaras with deep seriousness of your song. We aclaraste by the second song, "I've seen the future, brother, and is a crime." And in the next, Bird on a wire, that you played kneeling, crouching as if in prayer Nether. And the birds on the wire casings were shrinking. Like you hurt that voice, half consumed, but with the wisdom that young man could not provide any unredeemed.

Pounding in the environment the memory of that memorable evening, three years ago, when we expected nothing and the Canadian anchorite and supervening bankruptcy-bless-the cruel desfalcadora forced him to return to the road. Little has changed. The musicians remain, Neil Larsen is a sublime Hammond organist and our Xavier Mas lute it colors everything a landlocked comfortable. But the poet has had time to complete a new album, Old Ideas, in less equivocal appearance. The mysticism of Amen, with its splendid plaintive violin, and the majestic Come healing, beautiful as a traditional Irish song, led the highlights of the first half.

Leonardo has increased its repertoire, but it's visit to his 78 winters, many pages that ensure the passport to eternity. "It hurts the places he used to play," he mutters to Tower of song, the prayer that opens the second half. And from there, a cascade of big words. Suzanne, Hallelujah, Chelsea Hotel. Sometimes his baritone voice seems to come from the vocal apparatus, but from the bowels. So long Marianne, Famous Blue Raincoat, Take this waltz. It's true: someone who loves beauty can only accommodate Lorca in his heart. Thanks for giving us good life, Leonardo.

A Great Show, with an audience that took time to warm up, "The Guests" played for the first time!, hoping for some surprises in Lisboa too!

THE GUESTS....the band was caught by surprise by the sudden decision of Maestro Cohen to play the song. sunshinehello:
A quick visit backstage from Ahmed Rashid, author of the classic Descent Into Chaos.

A good video - uploaded by manotauro - Thanks!

From Charlei and Hatie FB:


Thank you Leonard, manotauro and Linda for this delightful breackfast present!

And a great audience. Quiet during the right songs. Participative during others.
When Leonard was singing the encores, he seemed so full of energy. As if he could go on forever.
Went back home with a smile.

Anthem (partial) (actually - it is almost complete - and it's good)
http://www.youtube.com/watch?v=bV_QgwhI2m8

I Tried To Leave You - Part 1 (partial)
http://www.youtube.com/watch?v=3BBBSGBVzsQ

I Tried To Leave You - Part 2 (partial)
http://www.youtube.com/watch?v=KUocd1pTjLk

I Tried To Leave You - Part 3 (partial)
http://www.youtube.com/watch?v=u0dRHxo5AJA

End Of The Concert
http://www.youtube.com/watch?v=SFrU1W582kc

It was my fourth concert and although the previous were incredible, the concert of yesterday night was superb. I don't have proper words to describe the unforgettable atmosphere lived during the show. The audience was devoted from the first measue of Dance me. The concert began at 21.15 due to the very long queues outside ant it finished at 1.10, almost for hours included an interval of 20 minutes. Very great performances, specially for me Take this waltz, bird on a wire, waiting for the miracle, Democracy... and the very great surprise of the night: THE GUESTS.

Leonard really enjoyed the night and he was smiling and even surprised at the reaction of the audience. Thanks to Leonard and his band for a very great show and I hope to see them soon again.