Concert reports, set lists, reviews, photos and You Tube links. Fan meet-ups before and after the concerts.
Post Reply
368 posts

joyezekiel wrote:Waiting at Brussels airport with battery about to die...... just want to say thanks to friends old and new for making these few days so memorable. Leonard is on amazing form.... last night's "Partisan" was the best I've ever heard! More when I get home....Joy

I couldn't agree more. The performance of The Partisan was breathtaking and so powerful. It was already fantastic on sunday but yesterday it had something very very special about it. After the song was finished I only thought "WOW".

A question for the ones who witnessed the soundchecks. Are they starting every afternoon at the same time? If so, at what time?

The only complaint I still have about the new sound: I don't like the violin and the jewish harp in Democracy. Especially the violin does not fit into that song (my opinion). But at least Leonard sang the chorus together with the Webb Sisters yesterday which made me very happy because it sounded like it does on Live in London, which for me is the best version of the song. For me Democracy is a very special song because it is the first song I heard by Leonard and thereby the song with which it all started for me.

All other songs sounded perfect however. I love Javier Mas and the superb sounds he gets out of his instruments. 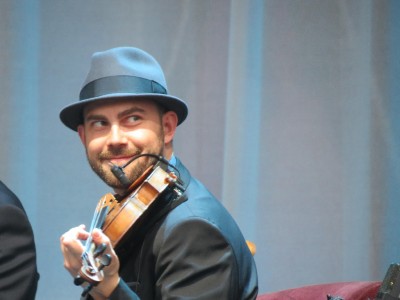 FOXWOOD wrote:Was there any merchandise at the concert and if so was there anything of particular interest?

These are some pictures I shot of the merchandising. I myself bought the program book (15 Euro), which is printed on luxury paper , large size, with many stunning pictures of Leonard in black and white (beautiful!). Many old pictures of the young Leonard too, even as a child. Also song lyrics in handwriting of Leonard (working sheets), nice to see. In the centerfold there are many little stickers , all regarding Leonard of course. I'm glad I bought it, I will cherish it forever.

I did not give any feedback of the first concert yet, here on the forum : I can only agree with all these positive comments! I was really happy he sang "The Future" and "Sisters of Mercy", which are two of my top 3 (even though that's very hard to choose while almost all Cohen's songs are jewels!). I'm so excited I also can attend the last concert in Ghent, next Saturday, and I will try not to take that many pictures again, and concentrate even more on the music. But it will be tempting to take pictures 'cause I will be in the front row then

Have not seen any video's of The Future

And to Maarten: Thanks for all the great work you did !! You deserve a statue, really !
And to Seventhson: Thanks for a great review of the second concert. I was dying to read about the setlist. Glad you were in better compagny now!

tomsakic wrote:Waiting eagerly for Light as the Breeze. Released in 1992 on The Future, this masterpiece was NEVER PERFORMED LIVE before.

it was pure bliss. slightly shorter setlist I think, stopped with save the last dance. An odd choice but very special indeed.

About those soundchecks, can anyone just que and witness them or do you need a ticket ?
in the latter case I can't witness one since I only had tickets for the Tuesday show...
Top

nessler wrote:it was pure bliss. slightly shorter setlist I think, stopped with save the last dance. An odd choice but very special indeed.

About those soundchecks, can anyone just que and witness them or do you need a ticket ?
in the latter case I can't witness one since I only had tickets for the Tuesday show...

Actually, both concerts had the same length. On tuesday he played two additional songs during the first half of the set, that's why he didn't play the two songs after Save the Last Dance like he did on sunday.

Our remembrance to a beautiful night. Wished we never had to go home.
Enjoy!

More video from the opening night

Albert THANK you for the Light as a Breeze upload...I am in heaven...
Thank you everyone again for all your reports and Jarkko and Eija for the photos..
What a delight!
Leslie PY

tomsakic wrote:Waiting eagerly for Light as the Breeze. Released in 1992 on The Future, this masterpiece was NEVER PERFORMED LIVE before.

Oh Albert. what a magnificent treat. And such perfect videography! Thank you.