Everything about the European leg of the World Tour!
Post Reply
108 posts 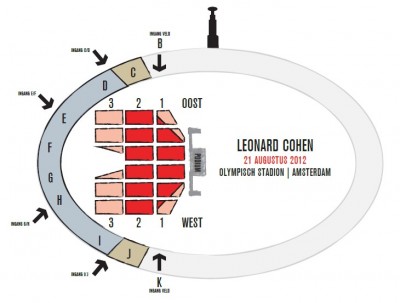 I knew it! Amsterdam - Mokum to the locals.
Great news Jarkko!

Great new but one request to everybody.
Please refrain from scattering the link to the presale all over the internet as soon as it is announced.
As we can read on this forum, it is what happened with several other concerts in the tour
Give the scalpers as little opportunity as possible so the tickets can go to the real fans.
So don’t post on facebook or any other social media sites.
Last edited by Franks on Wed Apr 18, 2012 12:15 pm, edited 1 time in total.
Frank.
Top

Could not agree with you more about not listing any presale details on social network sites . However if anybody watched the Channel 4 (UK) documentary eariier in the year, the sales staff for Viagogo and Seatwave and other similar outlets, DO infiltrate all fan websites and consolidate connections with major ticket sources. They are issued with multiple credit cards by their company to enable them to purchase an arful lot of presale tickets. Those tickets are then loaded up onto their sites under the guise of being unwanted tickets purchased by fans who no longer want them !!! They purchased so many for a TAKE THAT tour but could not sell them all. The outcome was about forty or fifty good tickets for each concert on that tour were binned.

They obviously have their "spys" registered to this forum and many others too .

but every little bit of caution must help to lessen their ability to buy and buy.
Top

Great! Never expected to see Leonard Cohen playing at the Olympic Stadium. Not a regular music venue.
Beautiful building though.

The whole stadium will not be used (whole capacity 40-60 000!!) but a part of it. Wijbe will post a plan before the presale opens.
eventim.nl will be the seller.

jarkko wrote:The whole stadium will not be used (whole capacity 40-60 000!!) but a part of it. Wijbe will post a plan before the presale opens.
Sherpa will be the seller (same promoter with the Ghent concerts)

The Olympic Stadium in Amsterdam is an athletic stadium now with a capacity of 22.000. Formerly it was a football stadium with a capacity of 60.000.
Now it is an nice, more intimate venue. I visited some atlhletic games there and it has a good athmosphere. It may be a bit windy.

Hi Tom. In Dutch it is spelled as Olympisch Stadion. Just so you know!


jarkko wrote:Sherpa will be the seller (same promoter with the Ghent concerts)

I stick to Ghent, may be I even should be happy the concert in Amsterdam was not announced earlier. The stadion is huge, I like the more intimate places. So I guess it was meant to be like this!
I didn´t kill myself when things went wrong
I didn´t turn to drugs or teaching
I tried to sleep, but when I couldn´t sleep
I learned to write.
I learned to write what might be read
on nights like this by one like me.

with the Sublime Sisters of Mercy
Top

Thanks, Citizen Kane, didn't notice I missed a "c" in "sch"

I wrote it OK in other places, such www.facebook.com/LeonardCohenNewswire though