Everything about the European leg of the World Tour!
Post Reply
220 posts

Bean, according to the seating plan info, there are 28 seats in the central block (A4) numbered 81 to 108, so seat 88 would be eight in from either side. So, not dead centre, but more of a 'golden mean' type arrangement.
Deen

Bean, by my reckoning this is where you'll be sitting, but hopefully there won't be a big red arrow pointing at you.

I'm next to you in seat 87. Tis good to see so many tickets sold already. Email from AEG this afternoon still informs us that the Hop Farm concert has not been confirmed to be announced and to be put on sale.
Those who are buying tickets please hold flight and hotel reservations until we have got the missing info.
1988, 1993: Helsinki||2008: Manchester|Oslo|London O2|Berlin|Helsinki|London RAH|| 2009: New York Beacon|Berlin|Venice|Barcelona|Las Vegas|San José||2010: Salzburg|Helsinki|Gent|Bratislava|Las Vegas|| 2012: Gent|Helsinki|Verona|| 2013: New York|Pula|Oslo|||
Top

Ticketmaster, are now saying they are selling tickets 2pm today. How odd that there is no official announcement!! xx
Top

For those who have tickets in blocks other than A4 (central block), here is the seating plan being used by HMV, which sells tickets through the main agent, Eventim. 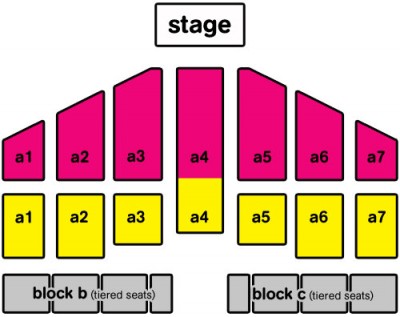 I'm not sure what's going on with Ticketmaster. They offered me a seat in row R of "Block A" - whatever that is meant to be. Ticketmaster don't offer a seating plan.

AEG will make a lot of people very unhappy if they don't confirm the concert.

i suspect that the promoter, in thsi case Vince Power has instructed the ticket agencies, eventim, ticketmaster etc
so that all makes sense
does Mr Powers have an inked contract from AEG/legal team behind Cohen Mgt ?
if he does not, then he is taking a risk
but as they are many parties and contracts involved, it is conceivable that one element is not secured in chain

i also just saw this :

i can imagine though with Vince Powers gig selling 10,000 at about £100 a pop, and adding another one - he is a strong position with AEG, in case they had not agreed yet

p.s. i meet Vince Powers many decades ago, he is a bit of a marverick, risk taker and ambitious business man too

i see now that he is planning to take Hop Farm to stock market, so it a possibitly that he 'has not yet got Cohen' but racing ahead to make it done deal and front it out

And according to their Facebook page, the whole Hop Farm concert is SEATED.

Apparently they're trying something new and big here with that project, and I'm glad that Leonard is in front of that happening, trying the new ways and not succumbing to festival slots and sport arenas.
Leonard Cohen Newswire / bookoflonging.com (retired) / leonardcohencroatia.com (retired)
Top

Hmm, it would be interesting if a 2nd UK date was added, given the show is being billed as the only UK show of the year! Basically everyone and anyone would be entitled to refunds on the 1st if they do add a second. All kinds of laws about false inducement and false advertising.

Any (wild) guesses on who might make up the 'full support bill'? (speculation acceptable)

Also, did anyone else receive an email saying that Eventim tickets have been posted already? Seems like the organisers are confident of the go ahead. Maybe a bargaining ploy?
Glastonbury 2008
Top

what a nightmare that would/will be..!!!.Does BF in any way complement BD??..?
No support for Lenny please if these sort of decisions are being made!

Dylan headlines the festival, with lots of different bands like the sublime Patti Smith and Peter Gabriel, and lots of different stages
so if you don't like Brucie, you just go to another stage or eat or sunbathe

ah, thanks Jarkko, what a cliff hanger, that one .....
did you also hear about a Sunday one being added ?