Everything about the European leg of the World Tour!
Post Reply
44 posts

Nothing sad, higher powers but not divine

But he made it to the redesigned band this tour

and we are thankful for that!

Very nice pictures, thanks for sharing.

Good luck on the forum,

Thank you Jarkko for posting the picture. I heard him play in Dublin and he is amazing he is very much amazing addition to the band.

i have to say mr bublitchi was amazing.

B4real wrote:I am so grateful to Leonard for deciding to once again include a violin which I believe expresses the soul of his music and words to such a deeper degree.
And to Alexandru, Thank you so much for your exquisite sound. It seeps into my soul.

The European leg of the Old Ideas tour is nearly over and I just wanted to say that I absolutely love the ‘new’ sound.

It is sheer ecstasy to be enveloped once again in the voluptuous voice of the violin.
Alex has been such a welcomed addition to the band. His virtuoso performances are the perfect compliment to Leonard’s songs.
The true meaning and feeling of them are so much more evident with Alex’s contribution.

Knowing this, I look forward with great joy to the rest of the OI tour.
It doesn't have to be perfect, it just has to B4real ~ me
Attitude is a self-fulfilling prophecy ~ me ...... The magic of art is the truth of its lies ~ me ...... Only left-handers are in their right mind!
Top

I agree with you completely, thank you for the beautiful post. I just said something similar in the Paris thread, & then I saw your post, & I apologize but I feel compelled to repeat: In my experience, Alex seems to really connect with the essence of Leonard's art, & the haunting, penetrating sound he makes with the instrument opens my doors of perception to dimensions of Leonard's music which I might not become aware of, at certain moments, if not for his expertise & the amazing sound of the violin. So thank you to Leonard Cohen, to Alex, & to all the members of this excellent band, for gracing us with your presence, your talent, & your energy, & transporting me to such wondrous realms with all those very unique, incomparable, inimitable, exquisite sounds. It is a gift which I will cherish forever.
Top

Thank you Rachel, for your words too. We can never have too much of a good thing now can we

....and here's something we have been waiting a long time for

https://www.youtube.com/watch?v=Uin0GjjNrKI
It doesn't have to be perfect, it just has to B4real ~ me
Attitude is a self-fulfilling prophecy ~ me ...... The magic of art is the truth of its lies ~ me ...... Only left-handers are in their right mind!
Top

Thank you for posting the link to that superb video, Bev! I had watched it just a little while ago, but your link gave me the perfect excuse (not that I really need an excuse) to watch it again!

I cannot think of a more beautiful, ecstatic sound than Leonard's Gorgeous Golden Voice united with Alex's - if I may use your perfect word - Voluptuous - Velvet Violin. The doors of heaven (along with Leonard's arms) are now open wide. . . And, not to be greedy, but - this perhaps bodes well for The Window, someday - &, dare I even whisper it - maybe even The Traitor; & dare I even think it - Take This Longing (I think that would be awesome with Alex's violin). . .& of course one could name so many more, but I'll stop for now. . .
Top

The Guests rolls years away. Bravo!

I didn't realise Bublitchi was Moldovan. He sounds like he should be. Bravo to that too.
Top 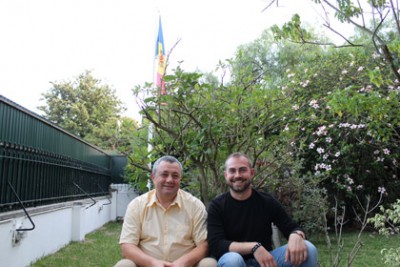 Sandu Bubliţchi, known to most Leonard Cohen fans as Alex Bublitchi, the violinist for the 2012 Tour, was photographed during his visit to the Moldovan Embassy in Portugal after the Lisbon concert. This following excerpt (in Google English translation) is from the accompanying article, which was posted Oct 9, 2012 at the Moldovan Embassy In Portugal web site: http://www.portugalia.mfa.md/anounsments-ro/493017/

After musical studies done in Chisinau, the young artist moved abroad, 10 years ago settled in Barcelona, Spain. He participated in several cultural projects of value is highly appreciated Grand Teatre del Liceu in Orchestra, Orquesta Sinfonia de Castilla y Leon, Orchestra of the Valencian Community (Palau de Les Arts). Since May, the band is fiddler Leonard Cohen, even the great artist was selected after a rigorous international competition. In a very interesting discussion at the Embassy, he talked about destiny Moldovan artists natural tendency to overcome national boundaries and collective efforts to make Moldova more known worldwide

Thanks Allan, for posting that here. I missed it on your site. I am so much enjoying the OI tour with Alex included.

Read above and you will know just how much!

And you've prompted me to include the rest of his credentials here as well:

Alexandru Bublitchi was born on 5 May 1980 in Chisinau to a family of artists. At the age of six he began his first steps into the world of music from the hand of his first violin teacher Ala Guseva. At the age of seven he started to study at the musical High school Ciprian Porumbescu Chisinau. In 1992 he won first prize in the national competition for young talents (R. Moldova) (junior category). In 1998 he graduated high school and went to study at the University of Arts in Chisinau under the tutelage of Professor Boris Dubosarsky. Between 1998 and 2002 he toured, Germany, Switzerland, Austria, Hungary, Romania, France and Spain as a member of various symphony orchestras. In 2003 he began his post-graduate studies at the Escuela Superior de Música de Catalunya in Barcelona where he finally established. From 2005 to 2008, he was Concertmaster of the orchestra L’Academia del Grand Teatre del Liceu. Under the musical direction of Javier Mas, Alexandru Bublitchi was involved in projects tribute to Leonard Cohen in Spain. Currently he is member of several chamber music groups and works with Orquestra Grand Teatre del Liceu, Orquesta Sinfonica de Castilla y Leon, Orquestra de la Comunitat Valenciana (Palau de Les Arts).

btw .... I notice in your photo that he is still wearing his saints bracelet.

Thank you, Allan & Bev, for posting all the fascinating details about Alex's musical history. I think Leonard has made a very wise choice in recruiting Alex as a member of the UHTC, & we are so fortunate to have the beautiful sound of his violin, which complements Leonard's art so perfectly, in these concerts. What a great gift. Thank you again.
Top

tomsakic wrote:Alex Bublitchi is, as far I understood, Javier Mas' violinist. He played violin in 2007 on Spanish tribute show ACORDES CON LEONARD COHEN which in the first place got Javier (who was arranger and musical director) into Leonard's attention, so he invited Javier to join the new band in 2008.

Maybe you could consider buying the whole release, it's double CD and DVD with full concert of Leonard's music, in Spanish, but ALL in Javier Mas' arrangements::)) Mr. Bublitchi's arrival to the band was rumoured as early as after first or 2nd leg in 2008, if I recall well, and he was expected in 2009, but higher powers were against it at the moment.