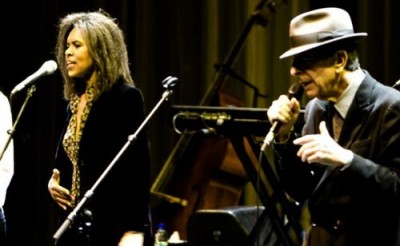 Sharon Robinson is best known as a collaborator with Canadian poet, folk singer, and cultural icon, Leonard Cohen. She has co-written some of his most popular songs, including "Everybody Knows" and "Waiting for a Miracle," and produced and co-written all of the songs on his 2001 album, Ten New Songs. She has contributed background vocals on many tracks, and has arranged many of his songs, bringing a hushed, electronic beat to some of his more beautiful poetry. She toured with him back in 1979, and is with him again on what will probably be his final tour.

What many people may not know about Robinson is that she is also the co-writer of the Patti LaBelle anthem "New Attitude," for which she took home a Grammy, and that she put out her first solo album, Everybody Knows, last year to critical acclaim. (Read the AMG review here.)

The multi-talented artist with the smokey, sensuous vocals, took time out of her tour with Leonard Cohen to answer some questions for AMG.

"New Attitude" and "Everybody Knows" do not at first glance seem like they have anything in common. Does it sometimes surprise you that you helped write both of them? Did "New Attitude" have a different sound when you first wrote it?

Those songs are very different and evolved out of completely different circumstances. One was part of the hit-making staff-songwriter world, where your goal is to write a radio hit, and of course try to write a good and inspiring song at the same time. The other, "Everybody Knows," came out of the more pure artistic world obviously, with Leonard giving me a verse to see what I could do with. I like that I've worked in both arenas, but prefer the latter. I've always liked and played lots of different kinds of music, so it wasn't really difficult to immerse myself in either one.

The sound of the "New Attitude" demo is almost exactly the same as the record. In fact the producers took me into the studio and basically had me re-create significant parts of the demo intentionally. I listened to the demo recently after not having heard it in years. It's pretty good. It has the same energy as the record.

How did your collaboration with Leonard begin and why do you feel it has been so successful?

I took a bold step in 1980 while on tour with Leonard and asked him to listen to a melody I'd written. He liked it and started working on the lyric on the spot. I guess I caught him at the right moment, plus he was already aware of me as a songwriter and liked my work.

The reason my collaboration with Leonard has been successful is something I can't really put my finger on or describe. It works because of personality and point of view, a sense of mutuality, respect, luck. We were able to find a place where our styles were complementary. You can't force or predict these things, and when they happen, you can't explain them.

Leonard has been getting some of the best reviews of his life on this tour. You've toured with him before. Why is this one so special?

The last tour I did with him, also the first, was in 1979-80. So for one thing, there is a much larger body of work to choose from, not that he was ever lacking for great songs. This time around, though, it's more than a concert. It's a journey, a life event, a shared experience of the deepest kind. It's being on the receiving end where someone is in the process of giving everything back, someone who embodies and represents all our struggle to know the heart. You can't imagine how moving it is to be next to him on stage every night. I love the moment at the end of "Famous Blue Raincoat" when he says, "Sincerely, L. Cohen."

The fact that this is most likely Leonard's last tour I think is a factor in its success, but also the careful way in which he put it together, highlighting his great works and then, as he says, giving every performance everything he's got. There's lots of weight and virtuosity in the band, and in the whole show.

You are a fabulous songwriter with an alluring voice and exotic beauty, so why did it take you so long to come out with your first CD? Do you like being out in front like that, or do you prefer hanging in the background?

Thank you. I'm getting used to it. I've always felt totally at home on stage, but I have to admit that becoming more of a known entity hasn't been the most comfortable thing for me. But I take great pleasure in seeing more and more people getting into my music.

When the majors were in charge of the business, somehow I just wasn't in the right place at the right time. You can expand that metaphor as desired. There were some false starts and probably some bad decisions. That being said, I love the way my career is playing out now and wouldn't want to trade it for any other scenario.

Leonard Cohen, with Sharon Robinson, plays the Fox Theatre on Tuesday, October 20. The event is sold out, as it should be.


October 8, 2009
Leonard Cohen, with Sharon Robinson, plays the Fox Theatre on Tuesday, October 20. The event is sold out, as it should be.


# Photo shoot with the legendary photographer Herman Leonard <<http://www.hermanleonard.com/>> So inspiring to work with him.
8:35 PM Oct 7th from web

Thanks to Al Kaufman for the "Q & A with Leonard Cohen collaborator, SR," in the Atlanta Music Guide! Here's the link
.....about 5 hours ago from web

# "Q & A with Leonard Cohen collaborator, SR," in the Atlanta Music Guide: http://bit.ly/3UNyAS
about 5 hours ago from web

Great Article. Sharon desearve it, really. She works very hard for the success. Wish you all the luck and the very best.
Top