I went in my local Starbucks this morning and there was Leonard's album "Old Ideas" for sale - sitting on the counter
The price is $12.95 ($14.95 in Canada)

The card is for a free song download of Banjo - iTunes - a code on the back with instructions - and expiration date is May 15, 2012

And here is a picture - Here's the Starbucks link where you can buy the album:
http://www.starbucksstore.com/leonard-c ... -and-books

While I was at Starbuck's website - I found this: a post made by Program Manager Timothy J. who was lucky enough to be invited to the event at the home of the Canadian Consulate - in Hancock Park area of Los Angeles - on December 13th, 2011 - the playing of the album with Leonard Cohen in attendance.


A Night with Leonard Cohen

A few months ago, I received an invitation in the mail from Columbia Records to hear the new Leonard Cohen album “Old Ideas” played at the home of the Canadian consulate in Los Angeles – Leonard in attendance.

I’ve been a disciple of Leonard’s music and poetry since 1968 when his first record, Songs of Leonard Cohen, was released. Attending meant I would be paying for my travel from Seattle to Los Angeles out of pocket. But I told myself: “You want to do this, so go and do it! You’ll never get this chance again.”

And so I arrived in L.A. on December 13 and cabbed it first to my hotel, and then, with only minutes to spare, headed to an area of the city called Hancock Park. The Canadian consulate’s home is old and gorgeous and surrounded by a dazzling landscape illuminated with flood lights from the ground up. I was in for a night!

Perhaps 50 folks were milling on the patio. After a short while, we were ushered into a small room filled with white wooden folding chairs. Coming through a side entrance, I managed to grab one in the second row and noticed the chair in front of me was reserved. “Hmmm. Leonard would be occupying that seat in a few moments,” I thought. “Oh, man!”

After being introduced, the great singer-songwriter stood up and thanked us for coming. He was a man of few words that night. He then turned his back to the small crowd, took his seat and the music began.

There was total silence from the audience for 45 minutes as his beautiful new record played. I hadn’t been in company that respectful (or terrified) for many years. I mean, folks really behaved!

After the record ended the artist took a few questions. “What was it like to have all these folks listening to your record tonight with you in the room?” someone asked. Part of him was very nervous, he said, and the other part didn’t give a damn what people thought. The small crowd laughed.

Another person asked how his spiritual journey was going. Without hesitation he replied: “I’m not and never have been on a spiritual journey. I recognize there is a greater power. However, I’m just the secretary taking down notes.”

He was speaking to me, one of his many disciples.

Linda, thank you for posting that lovely little write-up - I smiled & laughed & really enjoyed it!

sturgess66 wrote: I recognize there is a greater power. However, I’m just the secretary taking down notes.”

........and Linda, that would have been a pleasant unexpected surprise!
It doesn't have to be perfect, it just has to B4real ~ me
Attitude is a self-fulfilling prophecy ~ me ...... The magic of art is the truth of its lies ~ me ...... Only left-handers are in their right mind!
Top

And here I was thinking that he was the little Jew who wrote the Bible. . .it's all very confusing. . .(unless maybe the Bible is his notes. . .)
Top

Yes - the same in my Starbucks this morning - and the CD was playing in the store. Not sure why Banjo was the
Pick of the Week though - there are 9 better songs on the CD.
Top

My local Starbuck's had them too. What a thrill to walk in and see 'Old Ideas' on the counter next to 'The Chieftains'.
Then to see the Itune cards next to the sugar area.
At work someone came up to me and said they picked one up at Starbuck's so she could hear for herself the musician I am always raving about...
I loved it!
Does anyone know if this is in Starbuck's all over the world this week?
Leslie

Now that Starbuck's has discovered Leonard, that may bring in a whole new group of fans! I also saw Old Ideas at a Starbuck's the other day (although the "pick of the week" was not Leonard, it had something to do with Dora the Explorer...), and when another customer next to me picked up the album to look at it, I gushed about what an awesome album it is! The person had heard some of the songs online, and agreed that it was pretty special, and then he noted how remarkable (and wonderful!) it is that an artist at a later stage in his career could release such a vital and unique record! My thoughts, exactly!
Top

This is way cool! Thanks Linda! I'll be off to Starbucks now to pick up a download card (or 2). And maybe a $6 coffee.

I find it interesting that they chose Banjo for the free download. It seems like the "lightest" song from the album- not too deep, or spiritual, or spoken-word-ish. It's like Sony picked the one that would be most palatable to the average customer.

It will be interesting to see how it goes over at my Starbucks here in strip-mall hell where no one has heard of LC.

All 8 or so copies in my local Starbucks gone in one day!
Top

Went to Starbucks today to see what was up. Two copies of the CD were in the counter display among other CDs like The Chieftains and I think a Bob Dylan one. Of course I strategically moved the Old Ideas CDs in front of the others while I was paying for my (only $3.75) coffee.

They were indeed the cardboard fold CDs that Roy mentioned in another thread, so I was tempted to buy one- just to see if the inside was any different than the jewel case version.

There were TONS of the download cards at the cream and sugar table. It looked like no one had taken any, or few at most. They were also obscured by two napkin holders which were probably not helping matters. I did some more rearranging.

My daughter was mortified at this point so we left.

I downloaded the song when I got home even though I already have it. Just wanted to boost the numbers in case Sony and/or Starbucks is tracking the level of interest (you know they are). I love the picture on the download page so I took a screen capture of it: 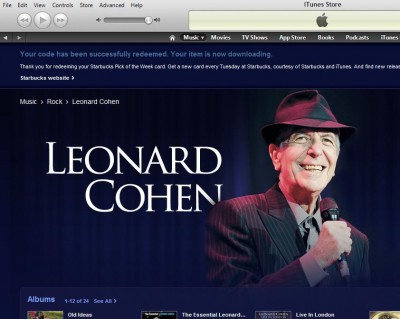 mnkyface wrote:I did some more rearranging.

My daughter was mortified at this point so we left.

Who co-opted who I wonder? I have mixed feelings about these tie-ins. Starbucks covers the world like a rash selling coffee-like substances (but not here in Italy praise be!)... then again a label associated with them was the only one that would release Joni Mitchells last album which is a brilliant return-to-form. Oh, modern life is rubbish.
http://www.breakfastintuscany.blogspot.com