A Source for Tacoma Trailer?

Ask and answer questions about Leonard Cohen, his work, this forum and the websites!
Post Reply
7 posts • Page 1 of 1

A Source for Tacoma Trailer?

Wherever did Leonard get the musical inspiration for Tacoma Trailer, the instrumental cut on The Future? The Jazz Police have discovered a clue. It may be stolen from a 1968 piece by Yusef Lateef
Listen to this beautiful piece, especially 5:59 onward. Sound familiar?

Some clarification on that source firstly from "The Source Himself"

during an Interview in 1992 "The Future Radio Special" from a special CD released by Sony music.

LC’s words:
"This was designed for a theatre piece by Ted Allen. It was part of long suite and I kept playing the music when I was in this trailer in Tacoma. That part of the suite attached itself and started to sound better and better. Then, I thought it would just be a nice moment to unwind from a very dense and literate album. I think you can unwind before you put the record on again."

Some technical aspects of “Tacoma Trailer” include that it is written in a 4/4 meter, in the key of D flat major, and its playing instructions are cantabile e legato. One of LC’s signature songwriting styles is the presence of minor chords. From a songwriting standpoint, LC has said, “I think the juxtaposition of a major chord with no seventh going into a minor chord is a nice feel. I like that feel.” With that in mind, “Tacoma Trailer” contains a friendly mixture of major and minor chords.

The personnel on this recording were Leanne Ungar (engineer), Steve Croes (synthesizer), and Bill Ginn (producer).
LC wrote and arranged the song.

Some say Tacoma Trailer has a resemblance to the theme from Twin Peaks -
https://www.youtube.com/watch?v=pXrjMaVoTy0

Further comparison discussion previously here on the forum:
viewtopic.php?f=9&t=20915
It doesn't have to be perfect, it just has to B4real ~ me
Attitude is a self-fulfilling prophecy ~ me ...... The magic of art is the truth of its lies ~ me ...... Only left-handers are in their right mind!
Top 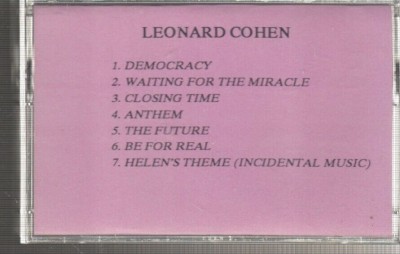 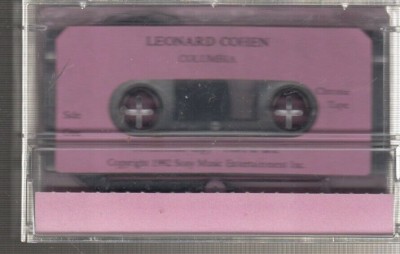 Hi Maarten,
As the images below show, "Promotional Copy - Not For Sale".
Maybe there’s a time limit on that copyright 1992 date. 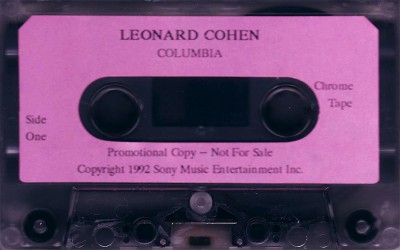 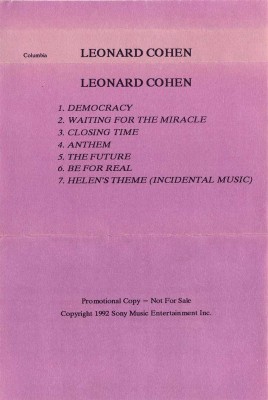 I'm sure there's no limit on the copyright date, but like so often in our world: if it's forbidden, it's more tempting. So anything that says "Not for sale" will be of more value to a potential collector.

By the way: thanks for the better pictures of the cassette's info. Do you happen to have a copy of this yourself or did you find those pics online somewhere? I'm not the buyer of the cassette that was on eBay recently, but I know the winning bidder and he has promised to send me the digitalized audio files from the tape. I'm curious to hear Helen's Theme, aswell as the other songs on the cassette, although I think they will just be the later album versions, not alternative takes... I'll find out soon enough...

Hi Maarten,
Yes, you are right about the tenacity of a collector! I found the images some years ago online. I haven’t checked but I think it could have been from Dominique Boile via Dr Guy’s old site. Update - I've just done a quick search to confirm that and I can't but I did find this interesting scenario - https://lithub.com/interview-with-a-boo ... -two-owls/

What’s the craziest situation you’ve ever had to deal with in the store?

Just in case you didn’t know, we almost were the only public place that played in a world premiere event “Helen’s Theme, Incidental Music” by Leonard Cohen.

The story goes: two years back, an event was set to launch the second edition of a book on Leonard Cohen written by Mircea Mihăieș, a literary critic and a literature professor at the Faculty of Letters in Timișoara. A week before the event, he found a cassette that was given to him by Leon Wieseltier with homemade recordings by Leonard Cohen for his album, “The Future.” On the cassette, there was a song called “Helen’s Theme, Incidental Music,” that later became “Tacoma Trailer.”

He brought the cassette and we managed to find a cassette player (thanks to our friend Mircea). We tested it out by listening to a minute of one song, being too scared of doing any damage to the cassette. Then, we wrote a new press release and we posted the news in the Facebook event.

A couple of weeks later, he called us and said: “Listen to this.” It was the song, but on the other side of the tape.


Unfortunately, I don’t have the cassette tape. I wonder how many Columbia/Sony Music made or handed out?

I'm guessing you are right and now reading the above quote, the songs on it are extremely likely to be the same as on the released album. But being the eternal optimist that I am, maybe there's a very small chance a few of them could be different versions as on the 1991-1992 Be For Real - The Future demo tape:
Democracy (there actually exists 3 or 4 outtake or versions of it somewhere)
Closing Time (recorded in 3/4 time with a really strong, nostalgic, melancholy country feel with entirely different words)
The Future (early version called If You Could See What’s Coming Next but maybe not recorded)
Be For Real (probably the same)
There were earlier versions of (The) Anthem and Waiting For The Miracle but I very much doubt they would be on this cassette tape.

Anyway, as you say, you will soon find out! I wonder if I could too

If that’s possible please let me know or better still if by some microscopic miracle there are actually different versions, I’d love to hear them!
Also Helen's Theme of course!

And you take care up there in your part of the world too!
It doesn't have to be perfect, it just has to B4real ~ me
Attitude is a self-fulfilling prophecy ~ me ...... The magic of art is the truth of its lies ~ me ...... Only left-handers are in their right mind!
Top

lightning wrote: ↑
Fri Apr 07, 2017 6:07 am
Wherever did Leonard get the musical inspiration for Tacoma Trailer, the instrumental cut on The Future? The Jazz Police have discovered a clue. It may be stolen from a 1968 piece by Yusef Lateef
Listen to this beautiful piece, especially 5:59 onward. Sound familiar?

I really like Yusef Lateef, but to my ears this does not sound familiar or similar to Tacoma Trailer at all (but again, I am musical ignorant).

The opening Twin Peaks theme - which was all over the air in 1989-91, what coincidences with time when
The Future CD was produced, sounds very similar.

I'd say "stolen" is too strong word. The musical theme can stay with you for years, or decades, and then you can "come with it", similar or different, not knowing it is not yours. Did happen do Leonard, yes. Did happen to REM (and they added Leonard's "Suzanne" as the "inspiration"). Did happen to Coldplay when then unintentionally stole "Bird on the Wire" melody. And did happen to Alabama 3 when the wrote the opening Sopranos theme - and the world thought for years it is a Leonard Cohen sample (or track). (Even now, I do hear The Future in it.) Did happen to Joni Mitchell when she stole (not the strong word here, as her song is on the edge of persiflage) the structure of Suzanne for her song Chelsea Morning. And it did happen to Bob Dylan - way to often