Thanks for your thoughts Marie and Leslie!!

Not long now!! On my way to the meetup in just over an hour. Not even the rain is keeping me from smiling!!

All day Tumbir has been saying this -


We'll be back shortly.

We're working quickly to recover from an issue in one of our database clusters.
We're incredibly sorry for the inconvenience.

So - no updates from Joey. They will probably start to flow in all at once - tomorrow - after the fact!


RareArtists - just when I thought life couldn't get any better, all of a sudden, I have a pair LEONARD COHEN tickets for tonight. now for dinner plans

billyverde - Leonard Cohen. Fifth row. May spend half the night crying like a baby.

GojaSF - tonight: at Leonard Cohen at the Paramount in Oakland http://yfrog.com/64f81hj

ebfmark - Leonard Cohen at the paramount "started the tour 3 yrs ago - just a kid with a dream at 73". Bet he'd do great tweets

winnig - The incomparable Leonard Cohen is rocking the Oakland Paramount incomparably. And he's such a class act.

Wow, what a show!!!! By all accounts, last year's Oakland shows were pretty special but Sunday's concert was up there with the best shows anywhere. I didn't write the setlist down but I believe it was broadly the same as Vancouver, with First We Take Manhattan in the first set, just before Waiting for the Miracle, both Avalanche and A Singer Must Die following Suzanne and Democracy following So Long Marianne in the first encore. Oh yes, and we also got Famous Blue Raincoat at the start of the second encore. The show started late and ran late so they skipped I Tried to Leave You at the end though Closing Time was in its rightful place after If It Be Your Will. Hopefully someone will be able to confirm the full setlist for Maarten's records.

Leonard was on fine form and his recitation of A Thousand Kisses Deep was superb, as were the versions of the acoustic songs. The audience was also on great form. They were very responsive to the "set piece" jokes e.g. in Tower of Song and they also gave Leonard and band several standing ovations. It was good to see Sharon get a standing ovation for Boogie Street. I can't tell you how good it was to see Sharon back in her rightful place and looking very well. Hopefully she is now fully recovered.

Finally, many thanks to Esther for organising the pre-show meet up a couple of blocks away from the Paramount. I'm only sorry that she isn't able to go to the second show. We'll miss her.

Dayna Macy is an author/writer - and wrote a bit at her blog after attending the show last night -
http://daynamacy.com/blog/ 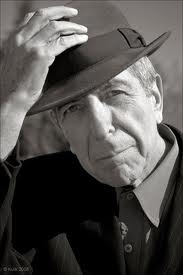 I saw Leonard Cohen last night at the beautiful Paramount Theater in Oakland. He was astonishing. He is such a generous, visceral performer. He contains a stillness that makes his words that much more valuable.

His Chelsea Hotel was remarkable. And Hallelujah, was, of course, insanely moving and deep. He also surrounds himself with virtuoso musicians, and gives them time and space to shine. No one hogged the stage, not even Leonard, who, at 76, performed for 3-1/2 hours. It is inspiring to see someone at any age be fully who they are and share that with the world. At 76, with his gifts, it borders on the miraculous. Hallelujah.

tumbler is back up but no new pictures yet! it was a bit disappointing not being able to access notes from the road since I I couldn't go to the Oakland shows and was looking for some coverage of the cocnerts from Joey. Hopefully those of us not going to these shows will be able to see photos and comments of tonight's show as well as from last night's.
I have enjoyed reading people' comments here and it sounds like it was a great show. Here' wishing an encore performance for all those going tonight!

Me too friscogrl - I hope "Notes From The Road" is back tonight - but so far nothing.
Maybe Joey fired them.


Leonard Cohen Is 'Just a Kid With a Dream' in Oakland

When Leonard Cohen brought his tower of song to Oakland, Calif. for the opening night or a two-night stand on Sunday, it represented the beginning of an end. After just two more tour stops, the production will go dark and Cohen will retreat back to his much-protected private life.

"Thank you for the honor of letting us play for you," Cohen told the captivated audience at the sold-out Paramount. "When we started this tour three years ago, I was 73. I was just a kid with a dream," he joked. "I don't know when we'll be back through here but, even though it's a school day tomorrow, we're going to give it all we've got tonight."

He meant it, too: Cohen filled three and a half hours with gems from his entire catalog, running down the classics -- such as 'Hallelujah,' 'Suzanne' and 'Bird on a Wire' -- while weaving in healthy doses from his newer releases as well. And while fans may argue that there's a divide between the two eras, Cohen effectively closed that gap on Sunday, as he offered a spoken word reinterpretation of 'A Thousand Kisses Deep,' as well as an emotional rendering of 'In My Secret Life' -- tunes from his 2001 release, 'Ten New Songs.' They fit seamlessly alongside nuggets like 1971's 'Famous Blue Raincoat' and 1988's 'I'm Your Man.'

Cohen used each song as a meditation, infused with all the cathartic passion of their original intent, while using their legacy as a vehicle to give the crowd a night of solid entertainment.

"It is a real pleasure to gather in places like this and play music when there's so much trouble going on in the world," he said, gravely. "Let us ring the bells that still can ring. Forget your perfect offering. There is a crack, a crack in everything -- that's how the light gets in."

He borrowed some of those words from the song 'Anthem,' which the band then launched into, as Cohen leaned into the music, fell on bended knee, and seduced the audience yet again. Every move he made was with dignity and grace. Every bow he took was sincere and genuine -- all the way through the fourth encore.

We hope, of course, that this is goodbye but not farewell. Because the next time he feels like singing... we're all ears.

Maybe NFTR is going to start trickling in.

A new one from Joey - from yesterday afternoon - Joey just posted on his FaceBook that tumblr is down again

- and its killing him. munter - Last nights Leonard Cohen show at the Paramount. A 4 hr set and one of the best shows I can remember. http://twitpic.com/3dj6ki

3PennyMovies - Roscoe Beck: "We are definitely allowed to be creative; it's expected and hoped for..." Tom Harrison: Leonard Cohen http://is.gd/iiqbo

ItsBrieBlog - I wonder what magnificent suit Leonard Cohen will be wearing tonight. Considering matching his outfit and pretending we're getting married.

And - night 2 at the Paramount has begun - 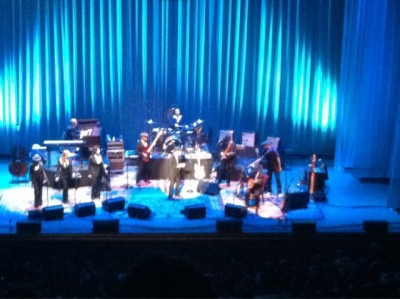 Encore 1
1. So Long Marianne
2. First We Take Manhattan
Encore 2
1. Famous Blue Raincoat
2. If It Be Your Will
3. Closing Time
Encore 3
I Tried to Leave You

The Paramount was a fabulous venue! Great acoustics and gorgeous art deco interiors. The theatre is a perfect size. It holds only 3400, but every seat in the house is wonderful. I hope to see some of you forum people in Las Vegas. I'll be at both shows. Just look for a very small lady with a Southern accent and left leanings.

I just returned from the Oakland concert and read Dani Burleson's earlier post. May I just say, Me Too. But don't tell my husband.
Angel of Compassion (aka Janis Kirtz)

One more thing. I fell in love tonight with Dino Soldo. If he were just 30 years older and a foot shorter.
Top

A photoset from Joey -