Down here in Australia, we are gearing up for the (hopefully) massive finale to Leonard's tour Down Under ...

The nib Arena (I only noticed yesterday) is actually a big soccer stadium open to the air. This will make this performance the only *other* pseudo-outdoorsy event of the tour. It also starts a fair bit earlier than the other shows -- where previously the support act started around 7:30PM, tomorrow Claire will be on at 6:00. I guess this means that the first part of Leonard's set will be played in sunlight; maybe we will see his unusual sunglasses make a return appearance. The weather looks ok ... forecast to be 29C (~ low 90s F) getting down to a minimum of 13C (~ 60F). So, not a repeat of chilly Hanging Rock.

Hope to grab some good photos ... and meet up with a couple of groups of forum-people. What more could you ask for?

And, of course, a full report of the evening will be posted here, and on my blog ... as soon as humanly possible. dce wrote: I guess this means that the first part of Leonard's set will be played in sunlight; maybe we will see his unusual sunglasses make a return appearance. The weather looks ok ... forecast to be 29C (~ low 90s F) getting down to a minimum of 13C (~ 60F). So, not a repeat of chilly Hanging Rock.

We've been in Perth since Saturday. It seems to get dark around the time Leonard is due on stage so I'm not expecting any of the show to be in daylight. When we arrived, there was quite a bit of cloud with spits and spots of rain but the weather has been almost perfect for the last couple of days - warm and sunny but not too hot and with a pleasant breeze most of the time. Let's hope the same holds true for tomorrow.

For those who might be geographically challenged regarding Australia (like me) - but still interested - and interested in the logistics of the travels of the UHTC - and traveling *virtually* - here is a map that locates Perth.
(All others - if you haven't already done so - just scroll on by. 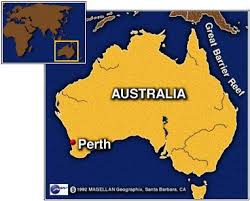 Joey had mentioned that travel from Melbourne to Perth would be an all-day affair with 8+ hours of air travel. They are going from the east coast to the west coast. By European standards - Australia is vast - almost twice the size of the European union - but the population is less than a twentieth. By North American measurements, It is as far across Australia - from east to west - as from New York to Los Angeles.

Perth is the capital city of the State of Western Australia and is said to have the highest number of sunny days out of a given year of any of Australia's major cities. It is situated on the Swan River - and is about 20 kilometers from the Indian Ocean. So - lots of beautiful beaches.

The venue - Nib Stadium (formerly Perth Oval and ME Bank Stadium) is a basically sports stadium and looks to be huge - can hold up to 25,000.

I'm hoping with all those people, odds are that we might be blessed with some video. "Pleeeeeese"

Looking forward to reading more of your reports Dean. Have been following them faithfully, thanks!
Wendy great you arrived safely...I will think of all of you there in Perth (also Greg and Ann-Kristen).
SO enjoy tonight and again look forward to all the reports from all of you from Perth.
Cheers!
Mutti/Leslie The build out looks great and Javier’s chair is present and accounted for.
* NIB Stadium - Perth, Australia The NIB Stadium staff have been friendly and professional, a great start to the Perth gig.
* NIB Stadium - Perth, Australia

mutti wrote:Looking forward to reading more of your reports Dean. Have been following them faithfully, thanks!
Wendy great you arrived safely...I will think of all of you there in Perth (also Greg and Ann-Kristen).
SO enjoy tonight and again look forward to all the reports from all of you from Perth.
Cheers!
Mutti/Leslie

Thank you, Leslie - also from Greg! He will of course take photographs, and he has also organised a bus for our group... Well, I DO look forward to tonight, let me tell you. Very special to finally see Leonard with Greg! Will post my report first thing tomorow, too...
"You thought that it could never happen / to all the people that you became"...
Love Calls You By Your Name
Top

Just wanted to let you know that you and Greg are also in my thoughts! I know you will enjoy the concert totally later today, and how wonderful it would be to be there with you also! This is the last (perhaps forever) concert of LC and the UHTC in Australia, where the fans love him so much. Give him and the band a good send-off!! Looking forward very much to your review....and to chatting later on.... A warm wind is blowing across the pitch and the band is making their way to the stage. LC is giving the grounds crew their own acoustic show.
* NIB Stadium - Perth, Australia On her last song of the last set with the tour, Clare Bowditch treats the crowd (and the crew too) to a new song.
It’s been an absolute treat having Clare on the tour and she and Evelyn will be missed by all.
* NIB Stadium - Perth, Australia With the wind hurling about, the upright has to live inside the tent today where bass tech Chris Bynum dials in a final tuning.
* NIB Stadium - Perth, Australia

I love this picture - As the sky rapidly darkens and the crowd floods in, Javier Mas leads the troupe to stage.
* NIB Stadium - Perth, Australia Javier Mas kindles the crowd into Who By Fire.
* NIB Stadium - Perth, Australia Tower of Song and the second set.

It doesn't look as though she's there.

Joey's photo showing the beginning of the show (posted by Linda) has Hattie's back in the shot, with no one to her left.
Top
Post Reply
67 posts