They are still "down under" down under. 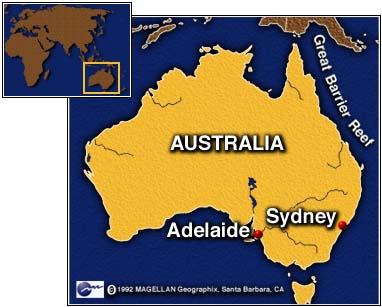 The venue, the Adelaide Entertainment Centre (AEC), underwent a facelift/revamp in March of this year - referred to a "redevelopment." The venue will hold up to 12,000 people.

Adelaide is the capital city of the state of South Australia and the fifth-largest city in Australia. Another coastal city, with foothills of mountains and beaches. It is listed in the Top 10 in The Economist's World's Most Livable Cities index. 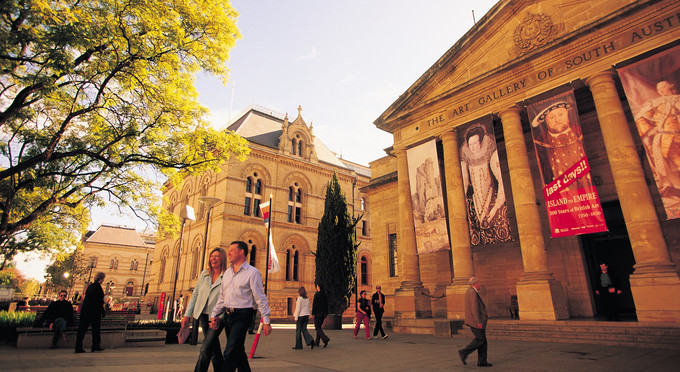 Hey Sturgess, you missed the best of the several delightful Adelaide photos that Joey put up yesterday.

Here's Charley Webb enjoying her day off with some native Aussie wildlife:

Charley Webb gets up close with a Gorge resident.

(For most of November 2010, I followed Leonard and the band as they toured around Australia and New Zealand. You can read about my wanderings on the blog I created to collect them all in one place: http://lcdownunder2010.wordpress.com/)
Top

AlanM wrote:Dean,
Are you really at work?
Alan Stage is prepped and ready for the Unified Heart Touring Company to go to work. What happened, it’s break time already. Back in twenty. A finely tuned machine, back on for the second set.

Just back from the Adelaide show ... another great concert, but the big news is ... NO SHARON!

Not sure why she wasn't onstage, I can only assume she's having some difficulties with her voice. I noticed that during Boogie Street on Monday (Hobart), her voice sounded a little strained: maybe she's resting it again. I suppose we'll have to wait for the official word on when she'll be back!

I wondered about that when I saw Joey's pictures... I hope she'll recover soon.
What sad religions they want us to believe.
Top Hope that she's fine and that this is just a temporary problem for her (like the cold that removed her from the last week or so of the European leg).
(For most of November 2010, I followed Leonard and the band as they toured around Australia and New Zealand. You can read about my wanderings on the blog I created to collect them all in one place: http://lcdownunder2010.wordpress.com/)
Top

I'm sure Dean will give a full account of the concert in due course.
It was great to meet him and the lovely Cathy for the first time in person.
Downloading some videos from my camera as I write this and will post when I can.
Set List attached graciously signed by the lovely Charley Webb. 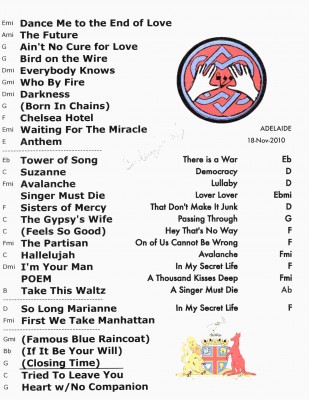 Very annoying thing this time as seen from 2nd row & probably others in the vicinity.
The left side front of stage cameraman appears to have just got his driver's license and was scooting back and forth all night. Very distracting - should have had his wheels clamped.

As Dean has reported an excellent show. 2nd half probably more "oomph" than 1st.
3 encores tonight - LC went through the Budweiser comments after Closing Time and everyone thought the concert was over.
Several band members had to do an about turn at the top of the steps and return to their places for "I Tried To Leave You".
Expressions of surprise mainly from the sublime Webb Sisters (not incandescent tonight), Dino and Rafael.
The last 2 mentioned seemed to be having a ball in their own separate ways.
During "Closing Time" while LC was singing adjacent to and looking at Dino, during the "Once for the devil" phrase Dino made a sign of horns on top of his head with his index and little fingers. Got a good audience response. Hadn't seen that before.
Less standing ovations early in the show (compared with my only other 2010 concert - Sydney 8Nov2010), but staid old home town Adelaide caught up in the 2nd half and during the encores.

Re photography: Took a monopod tonight.
1. No problems getting it in - acted like it was my walking stick!
2. It made me more obvious to security and I was "warned off" at interval, so my videos are only from the first set.

Re Set list: Plan ahead - talk sweetly to someone in the crew beforehand. The chap I spoke to was as good as his word and appeared shortly after the house lights went up.
Seriously lucky with the autograph - Charley Webb was waiting for a guest, near the steps from the stage and came over and signed it for me.

p.s. Videos to follow - Who By Fire went for 10 delicious minutes and Anthem even longer.
Nearly 2am - getting tired and sleepy at last.
Videos are:
Bird On A Wire
Everybody Knows
Waiting For The Miracle
Who By Fire
Anthem 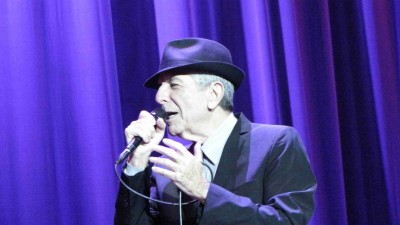 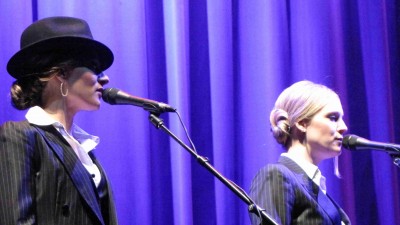 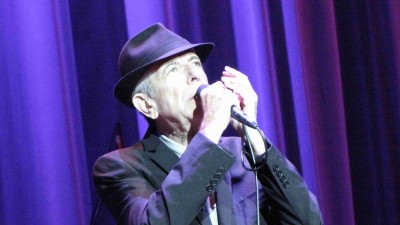 Don't know what my problem is - I'm only allowed 3 attachments, but other threads seem to have more.
Oh well, I take my lead from The Man and I am relaxed about it.
One more photo in next post.

Still floating at 1:15am 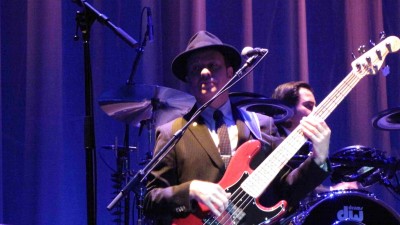 One more comment re monopod - bit awkward from near the front, looking up. I had to support it on an angle as there is no flip top to it.

AlanM wrote:Don't know what my problem is - I'm only allowed 3 attachments, but other threads seem to have more.

You're only allowed 3 attachments. If you see more pictures in a posting they're linked to an external source...

Thanks a lot for the pictures Alan!
What sad religions they want us to believe.
Top

I had a reasonably good seat for the Adelaide concert, though not as good as AlanM ... some good photos: Wow ... LC is even on the ticker tape displays outside the venue The Guitar Stand at the left of the stage has two soft-toy monkeys, but of course it would: Clare's musical sidekick Pikelet was celebrating her birthday ... may you grow up to be a pancake one day (better shot of) The Bloody Cross on top of Calvary: The Adelaide audience is happy: Coopers is the Beer of Choice in South Australia ... so good to see the band only get the best: Dean,
Your pics are all fantastic, especially loved the one of the happy audience - took me right there. So much for 'gloom and doom' LC

Thanks for including the one of Fred and Vegas Ed

A little slideshow from Joey -

Some last looks at the Adelaide show before we go.
- Adelaide Entertainment Centre - Adelaide, Australia