That's the City of Brisbane in the picture above. Brisbane is the capital of the State of Queensland and also the largest city in the state - and the third largest city in Australia. It is situated on the Brisbane River. There is a man-made beach in the city itself and the beautiful Sunshine Coast and Gold Coast beaches are within easy driving distance.

The venue is the Brisbane Entertainment Centre, also known as the BEC, located in Boondall, a suburb of Brisbane City. (I wonder if that means there will be a curfew.) The Centre has 11,000 tiered seats and a maximum concert capacity of 13,500 and is used for concerts, musical theatre and ice-skating shows, etc.

A couple of Joey's pictures from yesterday - The sun has made a surprise appearance and a rainy grey day has turned picturesque.
* Brisbane, Australia And setup work has begun at the venue - The concert is well underway -

anthonyvoevodin TeeVoe - I'm sitting, waiting for Leonard Cohen to come out on stage.

ArryWilly Aaron Wilson - as you would have guessed..... leonard cohen is amazing. his band is incredible too

Cheese4TheWin Dave O - Leonard Cohen is in the house

frogerchanovsky frogerchanovsky - Running on/off stage and spending much of his set on his knees without any problems, Leonard Cohen has raised my standard of 76 year-olds.

Dobboinaus Brian - Sitting still in awe of last nights concert at BEC. Congratulations and thanks to Leonard Cohen for a once in a lifetime experience. WOW!!!

It seems they have messed up the time zones down under...
Joey is still at the sound check... Everyone’s in, soundcheck in ten. Neil Larsen starts up the first number and the first soundcheck of the Australian run is running.

neo wrote:It seems they have messed up the time zones down under...
Joey is still at the sound check...

I know! It's confusing enough - a different time zone than New Zealand.
And Joey's tweets are being delayed by 4-6 hours?

Brisbane Entertainment Centre 6 Nov. Just seen the show and what a privelege it was! What a man, what a show, what a night. Leonard Cohen gives it everything. Performers half his age don't show anything like his energy & dynamism. Thankyou Leonard - you were brilliant. Brisbane loves you!!!

And for anyone interested - people are posting about tickets - exchanging/selling/wanting/buying etc. - for Leonard Cohen concerts in Australia -

sturgess66 wrote:I know! It's confusing enough - a different time zone than New Zealand.
And Joey's tweets are being delayed by 4-6 hours?

Maybe Joey didn't set his iPhone to the new time zone and tumblr gets confused by that...

Great to read that the tour is so enthusiastically received in Australia as well.

I think Joey flipped a switch - the tweets are coming fast and furious! Green room hang during change over and the gang’s all here. The jokes and stories far from “pc”.
It’s going to be a good night.
* Brisbane Entertainment Center - Brisbane, Australia Rafael Gayol and Dino Soldo shake it out before the band takes the stage.
* Brisbane Entertainment Center - Brisbane, Australia So Long Marianne into Famous Blue Raincoat followed by Manhattan,
Tried To Leave You and sewn up with Closing Time and that’s Brisbane.
* Brisbane Entertainment Center - Brisbane, Australia It is at the moment almost 7am Sunday morning in Brisbane, Queensland, Australia.

I have had three hours sleep and am still at the hotel in Brisbane and due to fly home very soon. Will have some interesting info to tell you all when I can gather my thoughts and feelings and photos together. I took (Ithought) a great video of Avalanche but it only recorded 3 seconds

You all know how much I wanted him to sing that song!!!

Surfice to say that once again I am totally blown away. I think having center front row seats could have something to do with that.

Looking forward to hearing all about it B4real.

AND - we have some video.

Last night's show at the Brisbane Entertainment Centre marked the beginning of the Australian leg of the LC world tour (not the "Austrailian leg" as advertised for a while on a certain other photo-blog that shall remain nameless ... yes, we noticed

). It would be hard to imagine a better way to kick off the tour -- Leonard and the band were in fine form throughout, and the audience gave a lot of warmth and enthusiasm back to the band by way of huge applause, and quite a bit of feisty cat calling and the like.

On a personal level, this show was quite special for me because I had the privilege of meeting a couple of our very own forum members who had flown down to Brisbane for the concert. So, hello to B4Real, Nautilass and Wombat Writer ... As always with occasions where I've met other forum members, these three folks were thoroughly warm, charming people! I was only slightly jealous that they had front-row seats (I was in row 5).

Length-wise, the Brisbane performance was a little longer than the last three shows in New Zealand (the two Wellington shows and the one in Christchurch), but still almost half an hour shorter than Auckland Night 1. The complete setlist was:

The notable re-inclusion of Avalanche was very welcome ... particularly after the last few shows, where LC only played a single solo song (Suzanne) instead of the two solo songs which has recently been customary.

Overall, I thought the selection of songs was pretty reasonable ... although I'm still not entirely sure what the driving force is behind slightly trimmed sets in recent shows. I don't really see anything that suggests that it's something instigated by the band, but who knows I guess.

One thing that bothered me a bit about the way the sets for the two Wellington shows was put together (and reading MasterThief's writeup, it seems the same for Christchurch) ... the girls seem to have lost a lot of opportunity to show off their remarkable vocal talents. Sharon's magical Boogie Street got trimmed out, as did the Webb Sister's If It Be Your Will. The NZ shows also dropped Born In Chains (the only other song with lengthy solos by the girls) ... although that made a welcome return here in Brisbane. I suppose it's inevitable that when the set list needs to be pared back, something has to give ... and I don't really think it was a bad way to do it. But I guess I'm glad that the Brisbane set reintroduced at least one vehicle for the girls to show off what they can do.

The Brisbane Entertainment Centre is a pretty big (and somewhat boxy) venue .. but it seemed to be completely filled last night, and filled with enthusiastic fans willing to demonstrate their love of Leonard and his music. Right from the first moment that Leonard stepped on stage to a roaring applause, you could tell that this was going to be one of those nights when the crowd was going to be just that little bit rowdy which makes for a lively atmosphere (without getting too annoying). By and large, that initial energy lasted throughout the concert ... there was even a moment late in the second set when an enthusiastic fan in the front row tossed a small gift for Leonard up onto the stage. Nice.

Leonard and the band looked well rested, and themselves were a little more energetic than usual. A couple of band members seem to have made a few changes to their on-stage constume and appearance. Rafael is now (very) clean-shaven ... and as a consequence looks *very much* younger. Javier was wearing a string tie (larriet?) secured at the top by a large white circular clip decorated with the Unified Heart logo. Dino and Rafael also had new neck-ware: in the case of the former it was a white Maori-style fish hook pendant, in the latter case it was a (ahem) very eye-catching red tie adorned with big yellow polka dots [someone less charitable than me might describe it as looking like ground-zero in a measles epidemic].

I was sitting on the right hand side of the auditorium, just a few rows back from the front. So I had an excellent view of what Dino and Javier do throughout the performance. I'd have to say that I was a little surprised to see exactly how many little musical highlights and accents Dino adds in to the background of some songs. There's a whole collection of little instruments stashed under his keyboard, in what I am from now on going to term "Dino's box of musical wonders." See my comments below for Anthem for some notable usage of intriguing items from here.

Some specific points I noticed:
The tour now heads south, and so do I. Next concert is in Sydney tomorrow (Monday) night. The Brisbane show has set a very high mark for both the performers but also for the audience Let's hope both can live up to the challenge of making the next show as memorable as last night's!

It was great to read your report Dean. Thank you very much for sharing your detailed observations!
What sad religions they want us to believe.
Top

Dean-
Yet another stellar review - so very enjoyable! Did he actually revert to 'ya' during Hallelujah?

I have just arrived home and starting to sort out things, 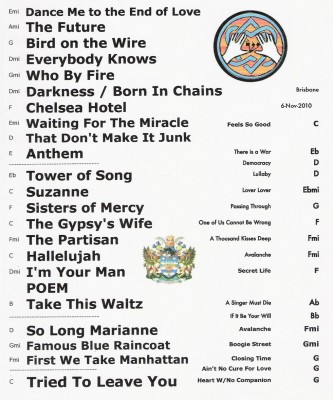 It appears similar to the NZ one but the following is what happened in Brisbane.

That Don't Make It Junk (not performed)

The Darkness and Born In Chains (both sung)

Closing Time (last song sung)
It doesn't have to be perfect, it just has to B4real ~ me
Attitude is a self-fulfilling prophecy ~ me ...... The magic of art is the truth of its lies ~ me ...... Only left-handers are in their right mind!
Top

dce wrote:On a personal level, this show was quite special for me because I had the privilege of meeting a couple of our very own forum members who had flown down to Brisbane for the concert. So, hello to B4Real, Nautilass and Wombat Writer ... As always with occasions where I've met other forum members, these three folks were thoroughly warm, charming people! I was only slightly jealous that they had front-row seats (I was in row 5).
Dean (from Adelaide)

Ah, yes Dean the pleasure was all mine (ours)

....and you were only slightly jealous. 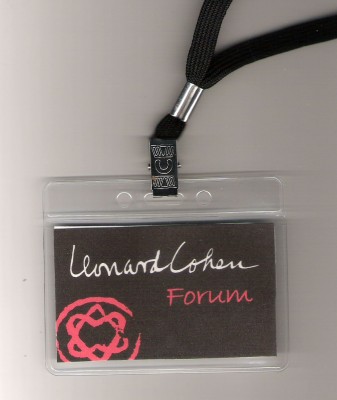 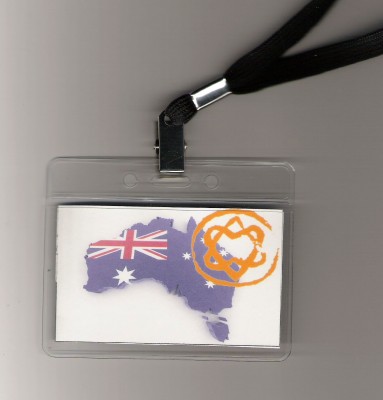 .....and Linda, I did blow Leonard a kiss from you (I think it landed on his left cheek)

It doesn't have to be perfect, it just has to B4real ~ me
Attitude is a self-fulfilling prophecy ~ me ...... The magic of art is the truth of its lies ~ me ...... Only left-handers are in their right mind!
Top
Post Reply
53 posts