The venue is Towar Hall in Warsaw -

An indoor arena that opened in 1953 and was modernized in 1999. It is used for popular music concerts, ice hockey and other indoor sports, and it is the home of the hockey team UHKS Mazowsze. Capacity is from 5,000-8,000 people. Bands all in, time to grab a snack and head to the stage for soundcheck.
* Torwar - Warsaw, Poland Stage is set, PA flown, lighting focus happening now and it’s time to move the band from the hotel to the venue.
* Torwar - Warsaw, Poland Javier Mas and LC work out some chord changes while waiting for the band to make their way to the stage.
* Torwar - Warsaw, Poland A surprise guest, former Polish President Lech Walesa, dropped by the greenroom to say hello to LC and the band.
* Torwar - Warsaw, Poland And - it's liftoff for Leonard Cohen and the UHTC - The times they are a-changin'... As the band takes the stage for the second set, behind the scenes there’s a burst of activity as the crew now has a race to clean and pack up catering, wardrobe and greenroom so that load out can start the moment the band sounds the last note of the night.
*Torwar - Warsaw, Poland 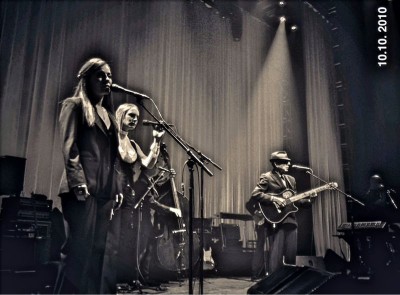 Even after three months of rehearsals and over 200 shows, Famous Blue Raincoat still gets us every time. So Long Marianne has the crowd up and on their feet once again.
In a few short moments the Torwar crowd is like a pack of teenagers singing along. Good times.
* Torwar - Warsaw, Poland A singers work is never finished.
Straight off the stage and right back to work. There’s an imposing stack of CDs and books to be signed before splitting for the hotel.
* Torwar - Warsaw, Poland

The times they are a-changin'...
see also: http://www.leonardcohenfiles.com/warsaw85.html

Thank you very very much! The Files contain so much, that I had never happened upon this section before. Leonard's comments prior to virtually every song are incredible, and touch the heart deeply! It has only made me love and respect him more. He lives poetry...breathes poetry....it is an integral part of his being...inseparable. Although the words in 1985 weren't poetry per se...they were. They reached out and touched the Polish soul. So beautiful. Thanks for leading me there!

Just dropping by to say I couldn't come to the Warsaw concert since I'm stranded some 300 km away, taking care of my parents' dog so they could come. I received like 5 phonecalls from friends who were actually there and most of them sounded like "shut up and listen" - and the rest was Leonard Cohen and his songs live.

Thank you friends, it felt almost as if I were there.

BTW, I always hated people who forget to turn their mobile phones off during concerts, but now I know why.
Cheers
Top

"Dear goodbye. I hope you are satisfied. Try to say goodbye - he said to enthusiastic audiences at the Warsaw Torwar Leonard Cohen. Sunday's concert by the legendary singer's lasted almost 4 hours.

Leonard Cohen, Canadian poet and a poet, a favorite singer of several generations, began his concert from the smash hit "Dance Me To The End Of Love." And then one by one, perform their best, the most famous songs.

The repertoire of the concert, consisting of two, lasting one and half hours in part, was a flashback kind of the most important periods in his career Cohen. Singer pointed out, especially songs from the 80s and 90, but also earlier, and these, the latest from the last album "Songs from the Road."

The singer greeted the audience in Warsaw, thank you for your warm welcome rather melancholy, said: "Life is short, and the roads are far away. Who knows if we'll meet again."

The audience listened as such zamagnetyzowana "Everybody Knows," "Bird On The Wire," "In My Secret Life," "Sister of Mercy," "Hallelujah," "I'm Your Man," "Chelsea Hotel", "So Long Marianne" and "Suzanne ". "Just to name one of Cohen's song titles, and now we hear his beautiful strong, male voice - said during the break Ursula concert, a student from Lodz.

"It is good that in Warsaw, as previously in Katowice, Cohen sang two new songs - told PAP Agnes Kloryga from agencies Jazz again and again, which organized the concert. - One of them "Feels So Good" is a beautiful ballad, which is probably a form of summaries and creativity, and life. But such is the atmosphere of these concerts and the tour "- she added.

Each track has been awarded Cohen huge applause. Singer evade the cap and thanked him and the audience, and the accompanying musicians. He also said that it is a real honor for him that in the audience is Lech Walesa.

Cohen was accompanied by a team of excellent musicians, they include Javier Mas, Spanish virtuoso of exotic stringed instruments, bass player and bass player Roscoe back, Dino Soldo who played on saxophones, harmonica and also sang, like Neil Larsen, also plays the Hammond organ. Bob Metzger played on electric guitars, and Rafael Gayol on drums. There was also a vocal duo, The Webb Sisters.

In the finale of the concert he sang his superprzebój Cohen "Famous Blue Raincoat" and then it turned out that the audience does not intend to allow the singer to leave the scene. A standing ovation led the artist to encores, which turned into minikoncert, which lasted nearly an hour. Even forming a hint track "I Tried to Leave You" did not help. Singer still bisował several times.

Warsaw concert Deutsche Bank Invites Leonard Cohen was the second gig in Poland in the current world tour, which began July 25 in Zagreb, and will end on December 11 in Las Vegas.

The poet and songwriter Leonard Cohen was born in 1934 in Montreal. There is more than 40 years. His work is defined as the author in the genre of song and folk rock. In Cohen's output is close to 20 albums and many singles. In 2003, received at the hands of the Governor General of Canada Order of Canada, Canada's highest honor, awarded him for his outstanding contribution to the development of Canadian culture. In 2008 it was adopted into the Rock and Roll Hall of Fame, a prestigious museum of rock and roll and rock, honoring artists who have made a fundamental contribution to the development of this species.

The Google translation is not great

Canada's bard, who on Monday sang in Katowice, then traveled to Moscow, where he appeared in the largest auditorium of the Kremlin. He is still on route world tour, which began in the spring of 2008 in Montreal and ends in mid-December with two final concerts in Las Vegas.

76-year-old singer does not know the hardships behind this gigantic project, or the circumstances of his taking (as we know, he must discharge his debts, because his former manager, "cleared" him millions of dollars in an account in 2005, when it once again meditating in the Zen Buddhist monastery) .

The first one goes, "Dance Me To The End Of Love", another hymn Cohen in honor of femininity, which the artist was singing 25 years ago at the Congress Hall, during his first visit to the Polish, and who later recalled in 2008 Torwar.

The audience, though not as large as two years ago, reacts very hot. In the hall several generations of fans. From those who still remember the concert of 1985, after the young people who have not yet been born yet. You can see many familiar faces - musicians, actors and politicians. Cohen thanked them from the scene for the arrival of former President Lech Walesa, with whom he came into the quarter-century ago during his first visit to the Polish.

Cohen, thank you for the first standing ovation, and continue singing just one song after another, swaying to the rhythm, sometimes accompanying himself on guitar.

They are thus "Bird On The Wire," 1969, "Chelsea Hotel", "Gypsy Wife." Climates and less from the circle of "Everybody Knows", "The Future" and "In My Secret Life," with several disks caused launched in 1988 and still goes on today co-authored by Artist Sharon Robinson - composer, arranger and vocalist. Sharon, acclaimed duets with Cohen last time, but no, unfortunately, now. Though, without her, endowed with angelic voices backing vocals from The Webb Sisters, as well as an instrumental sextet known to us already with a great Hammond player Neil Larsen, bassist Roscoe Beck and Latin guitar virtuoso Javier Mas, he sounds great, creating a colorful and diverse background for songs.

Do not fall silent applause. Dramaturgy of the concert does not crash, even a half-hour break in the middle. He needs to get some rest. After his return to the stage the voltage did not fall, because after listening to "Tower Of Song", "I'm Your Man" and copied many times, "Hallelujah."

And then, "So Long, Marianne" in 1968, and "Suzanne", popular in Poland through his tireless translator and Maciej Zembatego.

Warsaw audiences for years with the top 30 loving artist no less than his Montreal family can not expect encores. They were so obviously. Amazing form! After another standing ovation Leonard Cohen disappears behind the scenes, ending with a magical evening. Warsaw again taken. But in keeping with the energy the song "First We Take Manhattan," the show goes on. Just around the corner Ljubljana and Bratislava, then Australia and the USA. The last tour? Impossible.
Zycie Warszawy